Into the light: Local girl with rare skin disease gets the chance to be 'normal' by attending camp 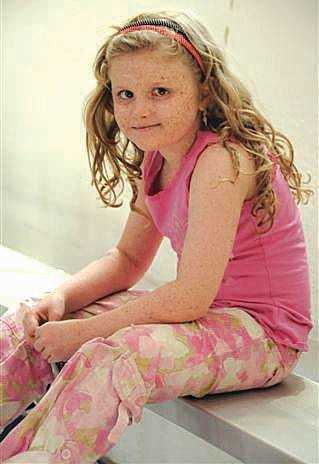 SIKESTON -- It was 4 o'clock on a sunny -- and hot --July day when Graycen Beardslee arrived at her grandmother's store in Miner.

Covered from head to toe in clothing and accessories to protect her skin from ultraviolet light, Graycen entered the building where she could remove her specially made hood with a plastic face cover, a pair of gloves and jacket.

The 5-year-old from Blodgett has Xeroderma Pigmentosum, a rare genetic skin disease that causes severe third degree burns on skin if exposed to sunlight, daylight or any ultraviolet light for even a moment.

Unlike most children in the summer, Graycen, who was diagnosed with XP at 2, must wait until the sun goes down to play outside.

"As soon as the sun goes down, we swim," said Graycen's mother, Kim Beardslee about one of Graycen's favorite summer activities.

Last month Graycen and her mother attended the XP Family Retreat for a few days in Sacramento, Calif. There, they reunited with and met about 30 children who have XP along with their families.

"It's like seeing your aunt or cousins at a family reunion. These people are our extended family," said Beardslee about the retreat.

The XP Family Retreat gives children with XP disease an opportunity to attend a "summer camp" that is safe and fun.

"Since XP is such a rare and isolating disorder, many families have never met another XP patient. The retreat gives the parents an opportunity to share important information and learn about new research. For the children, it's comforting to meet others that lead the same type of lifestyle and have the same day-to-day challenges," said Michelle Milota, executive director of the XP Family Support Group and mother to Aimee, a 6-year-old girl living with XP disease.

Beardslee agreed attending the camps have several benefits. Besides the retreat in Sacramento, the XP Family Support Group provided assistance so she and Graycen could attend events in London and Anaheim, Calif.

"Graycen didn't like to wear a hood, her mother recalled. After being with these other kids, she saw that they do it, too," Beardslee said. Then Graycen starting wearing the hood.

Graycen said the retreat's indoor activities included arts and crafts, a carnival with games and treats (she got to eat seven cotton candies) and bounce houses, which were her favorite thing to do.

At night when the danger of UV exposure from the sun is eliminated, children and their families got to watch a movie under the stars, have a midnight pool party and attend a minor league baseball game. The week ended with the families meeting and attending a concert by country star, Brad Paisley.

"That was cool," Graycen said about meeting Paisley.

A major highlight of the trip was, for the first time, Graycen and her mother met adults in their 50s who were living with XP.

"That was emotional. It reminded us there's hope out there," Beardslee said.

The retreat is also a time to receive a research update. Several prominent doctors attended and led seminars for the parents on current XP research and findings, as well as new medications under development.

"It takes a lot to go to these camps. It's emotional; it's exhausting, but it's her chance to be normal for a week," Beardslee said. 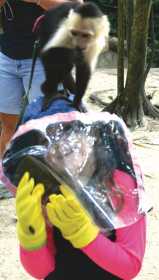 During a family trip to Honduras in November, Graycen Beardslee sported her protective gear so she could play with the monkeys in the daytime. (Submitted Photo)

Less than 200 people in the United States and less than 1,000 people in the world have XP. Both parents must be a carrier of the XP gene to pass it on to their child; however neither parent shows symptoms of XP, according to the National Institutes of Health.

Patients with XP rarely live to adulthood because the DNA damage is cumulative and irreversible. Currently, there is no cure for XP, but doctors believe that a cure could be found in the near future if funds were available for research

"A cure? I don't know how far down the road that is. They are making improvements," Beardslee said.

Last month a four-year long process came to an end when a U.S. lab became certified to diagnose patients with XP.

Beardslee would just like to make others more aware of XP -- what it is, its signs and how so much remains unknown about the disease.

"From the age of 1, they will have lots of freckles. They can have bloodshot eyes and (sun) burning," Beardslee said about XP symptoms.

Besides wearing her protective gear, each morning Graycen lathers up with a special sunscreen her mother orders from Europe. Beardslee estimated she uses about half a bottle a month on her daughter.

Graycen still has and uses the suit that was purchased with assistance from a community fundraiser over three years ago, her mother said.

It's also advised to those who have XP to avoid contact with household chemicals, cigarette smoke and charred food like those cooked on barbecue grill because of the cancer-causing agents.

From time to time, a topical chemotherapy treatment is used to curb the number of cancers Graycen may develop. Graycen has also had precancerous skin growths removed, which is something she will have to do for the rest of her life.

Graycen who turns 6 next month, will enter first grade this fall at The Christian Academy in Sikeston.

When asked what's the worst part about about having XP, Graycen said it's having to wear the hood.

"I can't feel the air, which I don't like," Graycen said.

Graycen visits her pediatric dermatologist in St. Louis every three months. Her home and parents' vehicles have specially tinted windows to keep out UV rays. Her daycare and school also have protection over the windows to block UV rays.

"We know the safe places we can go," Beardslee said.

The idea is to think outside the box, Beardslee said, recalling a trip to California when Graycen and another girl who has XP were able to jet ski during the daytime because they found protective equipment to make it happen.

"That was an emotional time when we went jet skiing, but then I realized, 'OK. We can do this stuff during the day,'" Beardslee said. "We just have to be creative."

For more information about XP or to make a donation, visit www.xpfamilysupport.org.