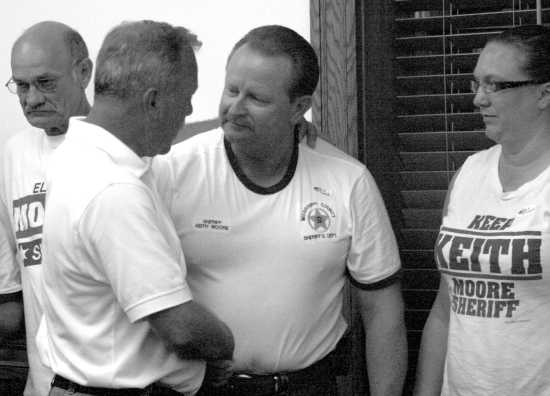 Roy Moore, left, congratulates Keith Moore on his victory in the race for sheriff at the Mississippi County Courthouse (Photo by Scott Welton, Staff)

All of the races resolved except for county assessor

CHARLESTON -- Mississippi County voters decided to keep their sheriff for another four years but will have two new county commissioners.

With only a single candidate not filing for county office as a Democrat in Mississippi County, voters were able to see all local races resolved but one during Tuesday's primary election.

In the race for sheriff, incumbent Keith Moore received 1,815 votes to win another term while challenger Roy Moore brought in 967.

"I'm just glad it's over," the sheriff said following the unofficial results. "It's been a long, hard four months. I'm ready to get back to normal."

Also not seeking another term in office was County Assessor W.R. "Bill" Thompson. Winning the race to run as a Democrat for assessor was Shirley J. Coffer who defeated Chuck Davis 1,516-1,264.

Democrats who ran as unopposed incumbents were Public Administrator Richard T. "Rick" Reed Jr., who received 2,281 votes, and Coroner Terry A. Parker, who brought in 2,327.