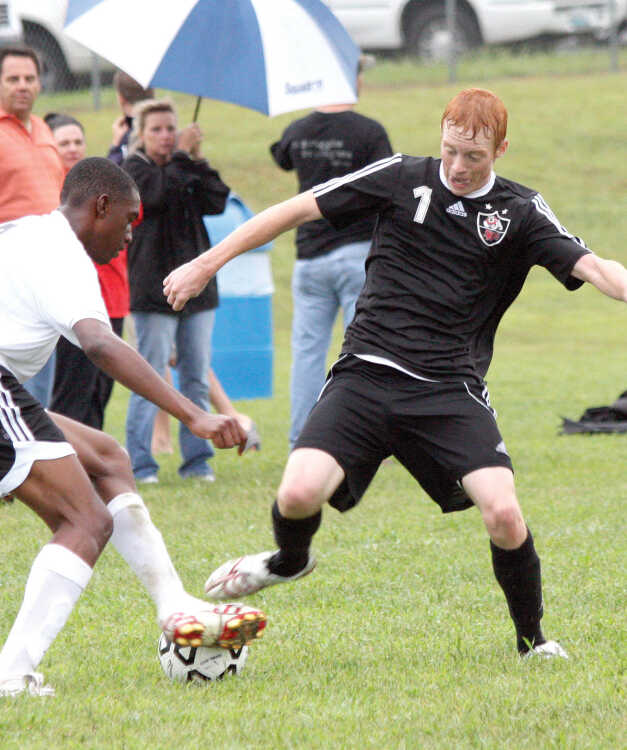 Sikeston's Steven Beydler tries to take the ball away from a Carbondale defender Thursday night in the Notre Dame Soccerfest. (Photos by Josh Mills, Staff)

Sikeston falls into the loser's bracket; will take on Cape Central today

CAPE GIRARDEAU -- The Sikeston Bulldog soccer team dropped their second match of the season on Thursday evening as they fell 4-0 to the Carbondale Terriers in the Notre Dame Soccerfest. Head coach Derrick Long said that the contest was similar to their loss against Saxony Lutheran as Carbondale jumped out early with two unanswered goals. 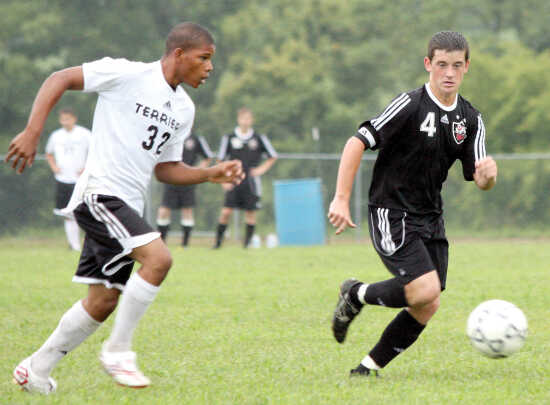 Sikeston's Cody Anderson (4) dribbles the ball away from a closing Carbondale defender Thursday night in the Notre Dame Soccerfest.

The score was 3-0 at half as Eddie Umana scored two goals and Andy Perpignani added one. Umana put the Terriers on the board three minutes into the game.

In the second half it was all Carbondale as well as they held the Bulldogs scoreless while Michael Dennis topped off the scoring 52 minutes into the contest making it 4-0.

"I thought we played better overall," Long said. "We still don't have anybody that can put them in the net and anytime you're back on your defensive end against good teams like this, then eventually they're going to find the net. We don't have any kind of counter attack."

Long went on to say that the Bulldogs are going to have to find a dedicated scorer if they're going to start winning games.

"We've got to find an offensive threat," he said. "That's kind of our biggest thing right now. I knew going in that was going to be a question mark. It's been a question mark since Blake Taylor left (to graduation).

"We've just got to have that guy that can put us on his back a few times and make some runs, put a couple in the net and keep us in some games. Overall I thought we played a little better than we did against Saxony, but it's just going to take a process."

Today, the Bulldogs (No. 5 seed) will have a shot at redemption as they play the No. 1 seed in the tournament, the Cape Central Tigers, who were upset early in the tournament. The contest will begin at 4 p.m. at Notre Dame High School.