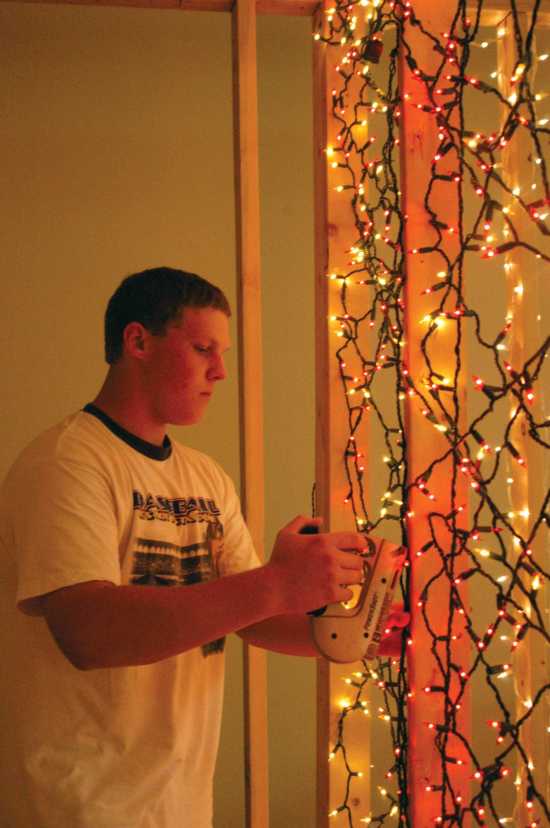 MINER -- Marty Pullen has seen the range of expressions in people's faces as they enter one of the last scenes in Miner Baptist Church's Judgement House.

"Some of their eyes get real big, and some of them won't even look at me," said Pullen, who plays Jesus in heaven, one of the last scenes in the drama.

"There's something supernatural about being in there and seeing him," said Freida Cardwell, who organizes the production with her husband, Chet.

This will be the eighth year for Judgement House. The eight-scene walk-through drama each year, and it is now one of the top Judgement Houses in the United States, according to Jackson.

"Some follow the Lord and some don't," said Mitch Jackson, senior pastor.

Seeing the story of what happens to individuals often causes people to re-evaluate their lives -- which is the whole purpose. "We do it for the sole purpose of helping others come to faith in Jesus Christ," said Jackson.

The last stop of the tour includes the invitation room. "A man will just go over what they've seen and ask if they have any questions," said Cardwell. In the room, the message is reaffirmed, and people are asked to look at their lives, and, if they died that night, whether they would go to heaven or hell, she continued.

At the end, people can raise their hand to talk to a counselor. Following last year, more than 24,000 people had walked through the Judgement House, with 3,362 accepting Christ.

That translates to a growing membership at Miner Baptist Church.

And it's not just people in the Sikeston-Miner area.

"A lot of people drive a long way to get here," said Jackson, noting the Judgement House draws church, youth groups and others from a four-state area. "I get letters every year from other communities and churches about people who have turned their lives around."

Cardwell said she and others have also seen "God's divine appointment," as time and time again, someone walks through the Judgement House and then gives their life to the Lord in the fall, and then die within a year. "It shows that God draws people there and God knows when they are going to die," she said.

"It changes a lot of people's lives when they come through here," agreed Pullen. "It's about everyday life and it has an affect on every life, in one way or another."

He and Jackson said what makes Judgement House so effective is the structure.

"A lot of people won't come to a church service or a revival service, but they come to this," said Jackson.

But it's not just those who go through the Judgement House that benefit. Those involved say there are several advantages for them, too.

"There's great fellowship," said Pullen. More than 300 church members -- about 80 percent of the congregation -- are involved. "And it just makes me closer to the Lord."

Jackson agreed. "I think anytime you get your church united in serving the Lord on a big project, it just really increases your fellowship and what God is doing in your hearts, he said.

And it is a big commitment it is to be a part of Judgement House. There are several ways to be involved, such as working on construction and other tasks behind the scenes or has a role in the drama as an actor or tour guide.

"Four nights a week of long hours and doing the same scenes over and over again and on your feet is really hard work for folks," said Jackson, noting that several come straight from their jobs to the church, and don't get home until after 10 p.m. on production nights. "But the thing I hear year after year after year is what a blessing it is to be a part of it."

He continued that it introduces him to different people and problems, too. "It opens my eyes to how many people out there are struggling," he said.

And Cardwell said it's personal for those who devote so much time. "They all have a passion that no one will go to hell," she said. "They believe in this with all their hearts."

Jackson admitted that not everyone who goes through Judgement House takes to the idea and what is presented. "But, I've never heard a complaint," he said.

Tours are one hour and begin every 12 minutes. Children should be at least 10.