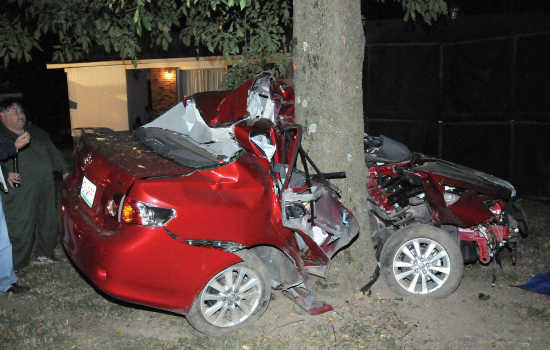 Sikeston resident Tyrone Sherone's vehicle is pictured following an accident Thursday in Sikeston that resulted in his death. According to witnesses, Sherone was traveling at at a high rate of speed just prior to the accident.

SIKESTON -- A Sikeston man was fatally injured after his vehicle struck a tree late Thursday.

The Sikeston Department of Public Safety reported that Tyrone Sheron, 29, died as a result of a one-vehicle accident on Ann Street in Sikeston. Around 11:33 p.m. Thursday, DPS received a call in reference to the accident and upon arrival, found the vehicle had collided with a tree just off the roadway, near John R. Boulevard. According to witnesses, the vehicle was traveling at a high rate of speed just prior to the accident.

According to Scott County Coroner Scott Amick, who responded to the scene, it appeared the impact from the collision was the cause of death.