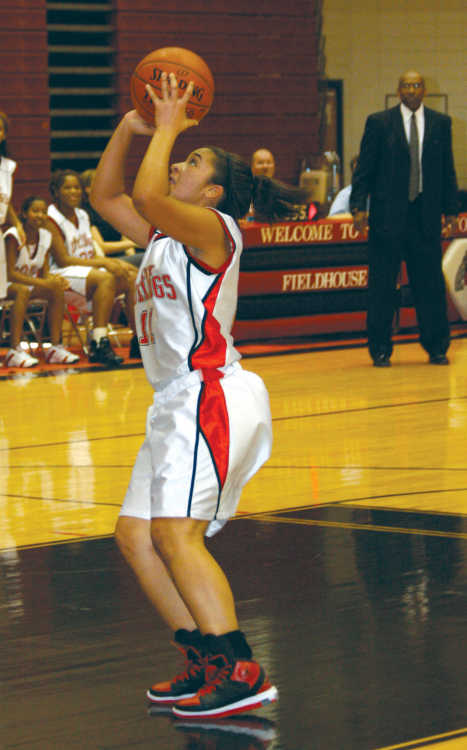 Sikeston's Keyonna Blissett puts up a shot in the fourth quarter against Caruthersville while coach Homer Jackson (background) looks on. (Photo by Josh Mills, Staff)

SIKESTON -- The Sikeston Lady Bulldogs notched their first victory Monday evening as they defeated the Caruthersville Lady Tigers 49-35 at the Sikeston Field House. For the Lady Bulldogs, their first win of the season came rather easily as a majority of the team eventually got in on the action before the final buzzer rang.

Sikeston wasted no time jumping on the visiting Tigers, outscoring their guests 22-4 in the opening quarter. The Lady Bulldogs were never challenged again as they led 31-18 at the half and 41-21 after three quarters.

Asia Liggins led all scorers with 24 points, rattling off 16 points in the first half alone in the victory. Vonteria Applewhite and Queisha Howard each chipped in with six points for the Lady Bulldogs.

"They (Caruthersville) didn't press us, so the number of turnovers we would usually have against teams that press us, we didn't have that," Jackson said. "It was reversed tonight. We were on the giving end of making them turn the basketball over. Most of our shots were in the lane. We had easier shots, like shooting layups off of steals."

Sikeston is now 1-7 on the season and will be at home again Thursday evening to take on Notre Dame.

NOTES: There was no junior varsity contest Monday evening.