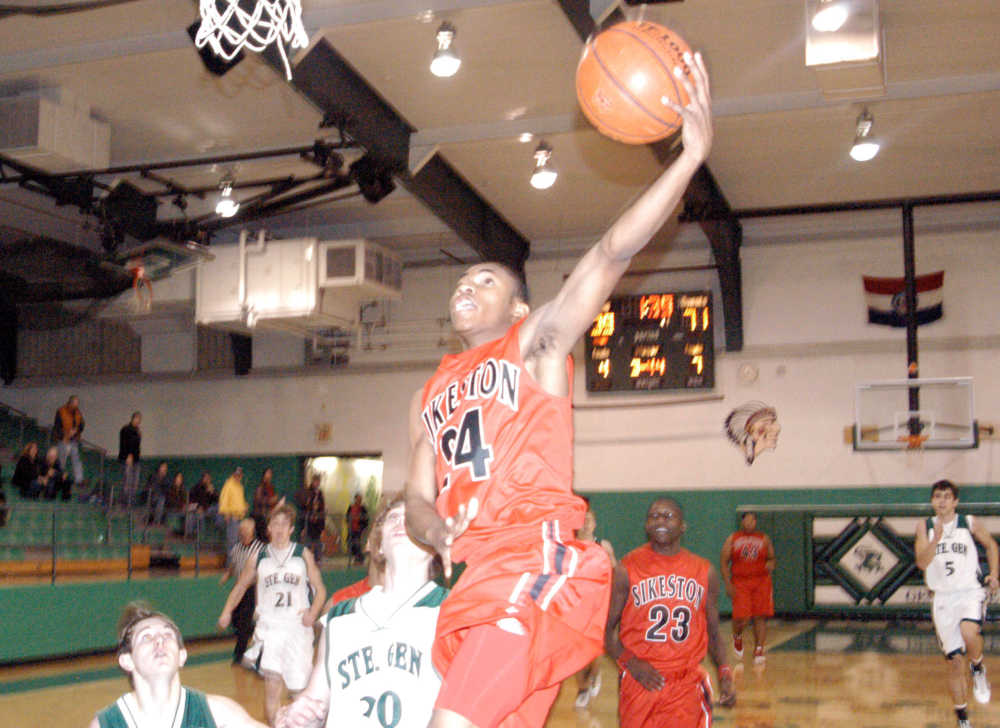 Sikeston's Martez Evans goes up for a layup in the fourth quarter Monday night in Ste. Genevieve. Sikeston won the game 77-41. (Photo by Matthew Bain, Staff)

Bulldogs improve to 10-2 with win over Ste. Genevieve

STE. GENEVIEVE -- The Sikeston Bulldogs basketball team moved to double digits in the win column Monday night as they trounced the Ste. Genevieve Dragons 77-41 for their 10th win of the season.

The Bulldogs (10-2) were contested by their district foe Dragons (8-4) in the first quarter. The lead changed hands five times in the first quarter as Ste. Genevieve was able to capitalize on Sikeston miscues. The Bulldogs began to pull away as the opening quarter ended, gaining a 19-15 advantage in the period's closing seconds.

Sikeston began to fire on all cylinders in the second quarter as they used stout defensive pressure and solid rebounding to set up their transition game. The Bulldogs scored many of their 31 field goals Monday night off the fast break. Five of those field goals came on impressive slam dunks. Sikeston outscored the Dragons 20-7 in the second quarter, which gave them a 16-point advantage heading into the half.

The Bulldogs continued to dominate in the second half and put the game out of Ste. Genevieve's reach early in the third quarter.

On factor contributing to Sikeston's overwhelming victory was the lack of depth on the Dragons bench.

"Really, we only play five guys," Ste. Genevieve head coach Rob Coleman pointed out. "When you play a team like Sikeston, who can really pressure you and move up and down the floor, your guys just get tired. I don't think we shot very well or rebounded well either."

"Going in, we knew they (Ste. Genevieve) were a much improved team," Holifield said. "I have a couple of game tapes of them and was very impressed with what I saw. They (Ste. Genevieve) came out hot, but our energy was very good tonight and we were able to apply pressure and force turnovers."

Sikeston controlled the paint in Monday's contest, as they out-rebounded the Dragons by a margin of 2-1 and blocked a stunning, seven Ste. Genevieve shot attempts.

"We rebounded the ball much better in the second half, which I attribute to our high energy tonight," Holifield said.

The Bulldogs were once again led by their three-time all-stater Michael Porter. Porter had a team leading 19 points, as well as eight rebounds, three assists, four steals, and two blocks.

"Michael (Porter) always comes ready to play and is very consistent on both sides of the ball for us," Holifield said.

With the fate of the game decided early in the second half, Sikeston was able to put some of their younger players into the action. The Bulldogs got important contributions off their bench from players like Martez Evans and Janeil Hatchett.

"It was a total team effort tonight," Holifield said. "We were able to get some of our younger kids in there tonight and they gave us valuable minutes. Those kids work hard all week in practice and it's great to get them in there and get some experience."

The Bulldogs will again be on the road tonight, squaring off against the Fredricktown Blackcats.

"It (Fredricktown) is always a tough place to play and we have to be ready to go again tomorrow night," Holifield said.