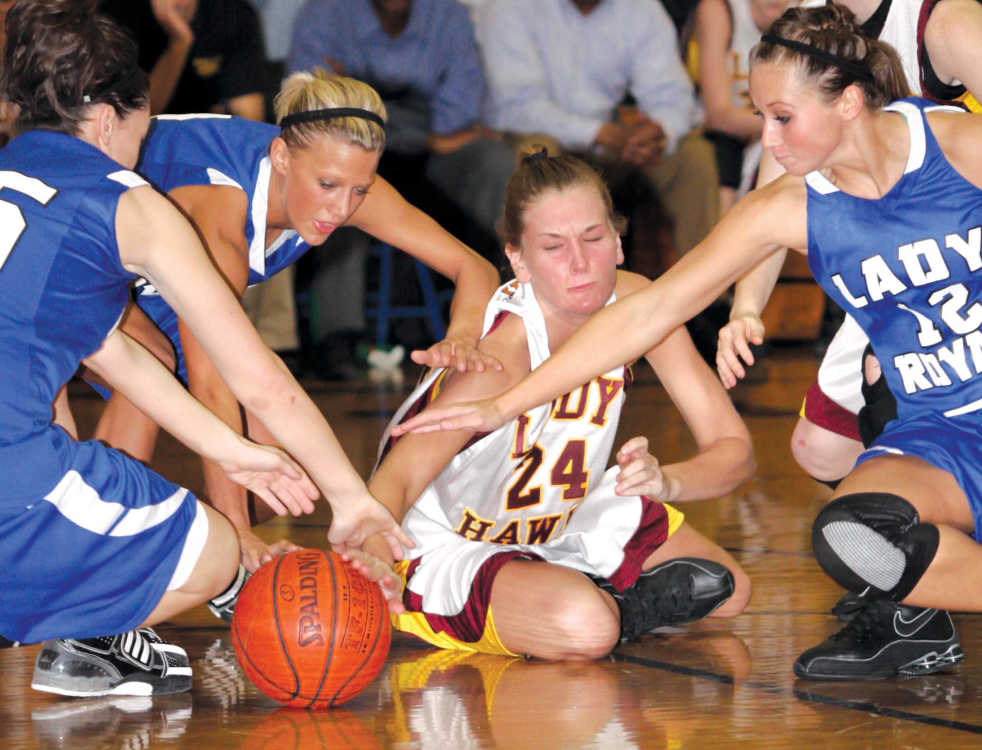 BROSELEY -- The Kelly Lady Hawks met up with a team on a mission Tuesday evening, the host Twin Rivers Lady Royals. The host squad made it apparent from the tip that they were there to fight for a spot in the championship game as they eventually defeated the Lady Hawks 69-40.

A 10 point lead in the first quarter, 12-2, improved to a 24-8 lead as the quarter came to a close. The Lady Royals knocked down three 3-pointers in the first eight minutes that helped extend their margin rather quickly.

The second quarter was pretty balanced as far as scoring was concerned, but Twin Rivers maintained their lead as they finished the quarter 7-for-11 from the line. Kelly struggled at the line in the first half as they wrapped up the first two quarters shooting 7-for-18 from the charity stripe.

At the break, the lower-seeded Lady Royals held a 37-19 advantage.

In the third, Twin Rivers continued their hot streak at the line, shooting 7-for-8 in the quarter, while piling up the fouls on the Lady Hawks.

Kelly couldn't manage a lot of scoring as missed opportunities under the basket cost them in the long run as they scored just 10 points in the quarter. At the end of the third quarter, the Lady Royals led 55-29.

Twin Rivers reached a 30-point lead minutes into the fourth quarter as Stephanie Jennings knocked down a pair of free throws, giving the Lady Royals the 61-31 lead. Jennings, the lone senior on the Twin Rivers roster, finished with a game-high 21 points, and wrapped up the night going 9-for-10 from the line.

The Lady Hawks managed to cut into the lead, but at the end of the night it was the Lady Royals who held a bid to the championship game while Kelly fell to the third place game where they'll face Dexter.

Despite the loss, Kelly head coach Rod McQuerter said after the game that he was proud that his girls had made the final four of the tournament.

"I guarantee you that nobody in southeast Missouri thought we'd be in the final four, but we're here and we're going to take advantage of our opportunity."

As far as the slow start, McQuerter said that Twin Rivers came ready to play from the tip.

"We dug a hole early," he said. "Give Twin Rivers credit -- they earned the win. They came out and they won the game and did what they were supposed to do. We came out flat and they came out aggressive."

McQuerter went on to say that a positive note from the game is that it's one of four games they will have played in the tournament, which is good for his squad as districts roll around in the new year.

Kelly was led by Kristen Powell, who scored 13 in the loss, and Londyn Backfisch, who finished with 12.

As for Twin Rivers, head coach Kelly Null said after the game that momentum had a big factor in her squad's victory.

"If you miss those shots, then you feel more tired and you get down and it would've been a whole different story," Null said, talking about the early lead in the first quarter. "We wanted them (Kelly) to shoot outside, but they just didn't want to. They still probably out-rebounded us, but we just beat them down the floor.

"We're pretty quick and we're seeing the floor so well and working together. I'm proud of my girls for being proud of each other and not just worrying about themselves. It's a group effort. It's not me and it's not really the plays that we run, it's them wanting it more."

Aside from Jennings' 21-point performance, Kelsey Snider also finished in double-figures with 15 points as did Tori Cole who added 10.

In a battle for a spot in the fifth place game, the Charleston Lady Bluejays were upended by the Kennett Lady Indians 75-58. Coming off of a thrilling double-overtime loss to the Lady Hawks the night before, Charleston took a 17-12 lead into the second quarter against the No. 2 seed Kennett squad.

In the third quarter it was Charleston who lit up the scoreboard, namely Jerquawnda Sherrell, who drained four 3-pointers in the eight minute quarter. She racked up eight on the night. Heading into the final eight minutes the Lady Bluejays pulled their difference to within three, trailing 50-47.

Kennett didn't lose their composure in the fourth however as they outscored Charleston 25-11 behind an amazing 21-point performance by Brittney Williams. Williams finished the night with 25 points, but the 21 in the fourth did all of the damage necessary as the Lady Indians advanced with the win.

Sherrell led the Lady Bluejays with 27 points while teammate Kasuela Cooper added 12 in the loss.

Kennett's Williams and Amos each finished with 25 points apiece in the win.

The Lady Indians will face Naylor today at 4:30 p.m. for fifth place.

Naylor jumped on top early, leading 20-12 after the first, but struggled to hold their lead as NMCC swiped the lead at half, 30-28.

In the second half, Naylor once again regained control. Andrea Sullivan aided their 10-point lead after the third as she drilled three 3-pointers in the frame. Holly Deckard added two of her own as Naylor held a 50-40 lead heading into the fourth.

Deckard led Naylor with 22 points, including six 3-pointers, while Moriah Goodrum added 19 and Sullivan finished with 13. As a team, Naylor knocked down 11 3-pointers in the win.

NMCC was led by Jasimane Flennoy and Karen McGloson, who each scored 15 points apiece in the loss. Benesha Childress added 10.

Naylor will face Kennett at 4:30 p.m. today for fifth place.