Sikeston baseball to play for third at SEMO conference tourney 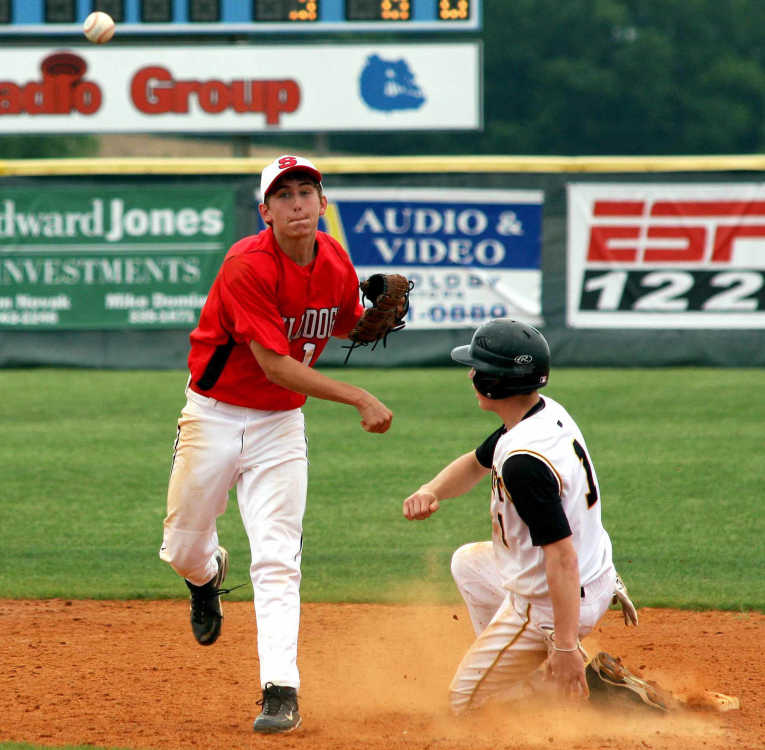 Kennett gets past Sikeston in semifinals

CAPE GIRARDEAU -- The rocket off of Ross Bohannon's bat in the sixth inning kept inching closer and closer to the right field wall. Kennett's Alex Bohnert crept right along with it, eventually snagging one of the hardest hit balls that the SEMO Conference Tournament wooden bats had hit all day.

It halted Sikeston's rally with two men on and it was the beginning of the end for Bulldogs' starter Trent McMillan. It also shut the lid on the No. 6 seeded Sikeston in a 6-2 loss in the SEMO Conference semifinals on Saturday.

"If that ball gets down, we take a lead," Sikeston head coach Kevin Self said. "Then, who knows? Maybe Trent goes out and works through that inning and finishes the game.

As it was, they make that play and we don't get a run. Once they had the opportunity they took advantage of it."

Watching Bohnert track Bohannon's deep fly ball took the wind out of the Bulldogs' sail. Kennett scored three runs in their half of the sixth inning which widened Kennett's chances with a four-run lead.

A single by Kennett's Logan Dollins that began the sixth inning chased McMillan from the mound and made way for reliever Trey Tigart, who gave up two runs himself. McMillan allowed four runs, three earned, on nine hits while Tigart finished the sixth giving up one run on two hits.

Kennett, who is the No. 2 seed of the tournament, got on the board early with a run in the bottom of the first. The Indians made it 3-0 in the third but it could have been a lot worse for the Bulldogs if it wasn't for the sure-handed and quick thinking abilities of third baseman Tyler Anderson.

After Kennett's two runs had already scored in the third, Anderson completed a 5-3 triple play to strand the bases loaded. Anderson caught a liner off the bat of Daniel Lockhert, forced out Clayton Gibbons who broke for home on the hit and then made the throw to Bohannon at first base to catch Logan Dollins off of first.

The Bulldogs scored their first run of the game in the next half inning.

As a team, Kennett pounded out 11 hits and didn't look phased by the use of wooden bats.

"Kennett swings them well," Self said. "They did the last time we played them.

"They swung them as good as anybody I've seen with a wooden bat in their hand."

Sikeston, on the other hand, was limited to two hits. A double by Nathan Rodgers in the fourth inning that scored courtesy runner Grant Hinton made it 3-1 in favor of Kennett. Jordan Williams poked a single in the sixth inning to cut the lead to one run but, Bohnert's catch ended the Bulldogs' scoring.

Dexter jumped on top 4-0 before Poplar Bluff scored three in the top of the sixth to make it a one-run game. However Dexter scored two in the bottom of the sixth and went on to win the game.

Kelly was held to just two hits in the game as Poplar Bluff scored all four runs in the second inning.

Dexter will take on Jackson at 2 p.m. today in the consolation championship.