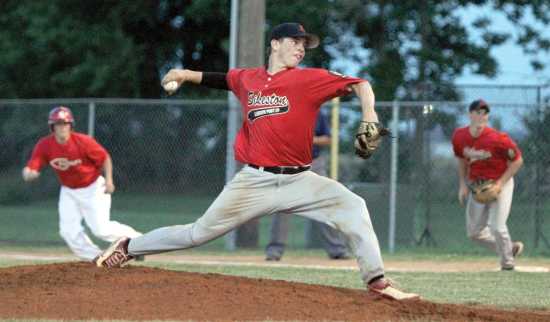 And it was made possible by one of the most important things in baseball.

"It really came down to pitching," Post 114 coach Chris Crosby said. "In the past, when we would boot one or have a mistake in the field, the pitcher would compound it by walking somebody and then we'd give up a hit.

"I really got to give it to my pitchers today, because they did a great job of throwing strikes."

Against Charleston, Mikey Russell had the starting job of silencing the Squirrels while on the mound. In seven innings, Russell allowed two runs, one earned, on four scattered hits. He also fanned nine batters.

"He had command of both pitches," Crosby said about Russell. "When you can do that, you can keep them off balance because it keeps them guessing."

Russell was tagged first by the Squirrels in the third inning after his counter-part on the mound, James Naile, hit a double down the left field line and was eventually pushed across home following an errant throw to first base on a bunt by Zach Rowland.

Sikeston came right back with one run in the fourth inning off the second defensive error from the Squirrels which allowed Evan Underwood to score from third base. The Squirrels reclaimed their one-run lead in the bottom of the fourth, however, when a single by Rowland scored Sam Johnson to make it 2-1 Charleston.

A half inning later, Post 114 obtained a lead they would never relinquish.

Sikeston began the top of the fifth with four consecutive hits. Trey Johnson singled to lead-off the inning and then a momentum shifting double from Rodgers into the right-centerfield gap tied the game at two.

"He tattooed that ball," Squirrels assistant Matt Bucher said. "I can only imagine how far that ball would have went if he had metal in his hands.

Bohannon gave Post 114 a 3-2 lead with another double. An infield single from Russell put runners on first and third. An attempt to catch Russell trying to take second base backfired on the Squirrels which resulted in Bohannon scoring the third run of the inning.

Sikeston led 4-2 going into the bottom of the fifth inning.

"He got a fastball and ripped it in the gap," said Crosby about Rodgers' fifth inning double. "That shifted the momentum over into our dugout.

"Hitting is contagious and we stepped up and got a few more hits after that."

The Squirrels never threatened again after that. Post 114 tacked on two more runs in the top of the sixth to make it the final of 6-2.

Sikeston had a total of 10 hits against Naile. Bohannon went 3-for-4 while Bryan Freed and Russell each went 2-for-4. Naile also went all seven innings giving up four earned runs. He struck out seven as well.

"You never know what your going to get with the wood bats," Crosby said. "Some teams struggle with it and some just step in there and hit it.

"It was just a great job by our hitters to make the adjustments to the wood bat and still put it in play."

Charleston, on the other hand, can't seem to find their stroke with the wood having a combined six hits in their first two games of the tournament.

"It's definitely a mental thing," Bucher said about the Squirrels recent struggles at the plate. "You have kids that are still pressing and they press so much that they're trying to do more than they can do. The take bad cuts, they get handcuffed on pitches that should be ripped down the line.

"They're just way off balance. A lot of it is that they're not relaxing."