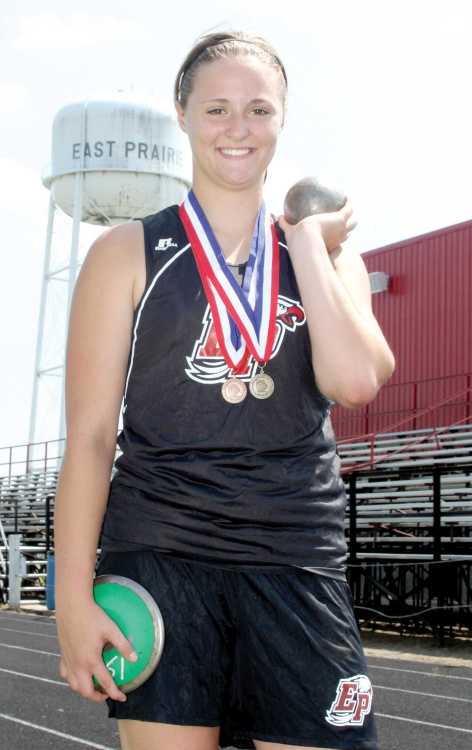 East Prairie's Jennifer Nicholson won the state championship in the discus at the Class 2 State Championships at Lincoln University in Jefferson City. She is the first girl state champion in the school's history. David Jenkins, Staff

EAST PRAIRIE -- All she wanted to do was run. The 100-meter dash, the 200-meter; it didn't matter. Early in junior high, Jennifer Nicholson considered herself a runner.

There was only one problem.

After realizing her limits in the speed department and a little persuasion from then East Prairie track coach David Kirby, Nicholson began throwing the discus and shot put for the Eagles track and field team.

It turned out to be the best decision she was forced to make.

"Coach Kirby told me that I was not a runner in seventh grade and that I was a thrower," Nicholson said. "Obviously, he was right."

Nicholson has been one of the premier throwers in Missouri since she was a freshman. She solidified that claim at the 2010 Class 2 Track and Field State Championships when her discus throw of 144-feet and 6-inches, which is almost 50 yards, landed her the second farthest throw in the state, next to Jackson High School's Jill Rushin, who won the Class 4 state championship with a throw of 152-feet.

Nicholson's state championship was the first for a female athlete in East Prairie High School history.

"It really didn't hit me that I'd won state until I got on top of the podium," Nicholson said. "There was an adrenaline rush like nothing else."

Kirby, who was the East Prairie track coach from 2005-07 and was a thrower for Southeast Missouri State University from 2000-2004, noticed that Nicholson possessed the physical and mental attributes it took to become a thrower.

"At an early age, she looked athletic," said Kirby. "A lot of times when your looking for throwers, you want an athletic kid. She just looked like she had a lot of potential."

Now as a junior, Nicholson stands at 5-11 and produces a wing span even larger.

Even though she has the bodily makeup of what you would want in a thrower, Kirby, who still helps work with Nicholson, was more impressed with her determination.

"With Jennifer, she is truly committed to becoming the best athlete, the best thrower she can be," he said. "She's on the right path."

That path began in junior high.

Although she was told her running dreams may not unfold the way she wanted them to, Nicholson still continued to pursue them. She was a SEMO South Jr. High All-Conference selection in the 75-meter hurdles as well as the discus, shot put and triple jump in both 2006 and 2007. In 2007, she competed in the AAU Jr. Olympics in Knoxville, Tenn. and placed third in the shot put and fifth in the discus earning her All-American honors.

"She was throwing, as a seventh grader, farther than a lot of high school girls were," said Kirby, who is currently coaching both track and football in Milan. "It just kind of blossomed from there."

As a freshman, Nicholson earned her first trip to the Missouri Track and Field Championships in the discus where she placed second with a throw of 124-feet. She was also an All-District selection in the 100-meter hurdles, a running event she still clings to.

As she was poised to make another run at a discus state title her sophomore year, Nicholson hit a snag. She failed to qualify.

"I choked at sectionals," said Nicholson. "I threw 81-feet and got dead last. It was the pressure of me knowing I could win. I just choked."

Although she placed last in the discus sectional event that year, she still qualified in the shot put where she finished seventh with a hurl of 37-feet, 3 inches.

It all came to a culmination this year with her discus state title and a fourth place finish in the shot put. She also qualified for sectionals in the 100-meter hurdles.

Her recent accomplishments as a thrower has gained her some attention from the likes of the University of Missouri, Southern Illinois University and Southeast Missouri State University.

With a state title in hand, as well as many other recognitions and awards, Kirby still believes that the best is yet to come.

"I'll be very honest with it, she's got a lot of potential right now," said Kirby. "She's not as strong as she could be. Her technique is good, it's not where it needs to be, but it's good.

"When she polishes those things up, she's going to be one of the premier throwers in not only the state of Missouri, but there's a possibility she can be a premier thrower in the country. She's got that kind of potential."

Nicholson continues to work at her craft. She competes in track meets year-round, she attends workshops and camps to try and better her technique in both the discus and shot put. She is planning on 'hopefully' competing in the junior olympics this year, as well as being a part of her AAU team and attending a summer camp on the campus of SIU and a winter camp at Mizzou in December.

"With the right kind of coaching, the right kind of weight training and things of that nature that she'll get at the next level in college, she's got potential to be very successful for a long time," said Kirby.

Along with repeating as a state champion next year as a senior, Nicholson will be striving for another personal goal for herself.

"I plan to break both (distance) records for discus and shot put next year," Nicholson said.

Maybe after she's done breaking those records, she'll work on getting a chance to compete in a running event or two. Knowing Nicholson, she'll make a run at it.