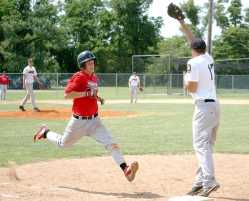 Sikeston's Evan Underwood attempts to let out a single against Jackson on Friday afternoon in Charleston. Brent Shipman, staff

CHARLESTON -- If the Sikeston Sr. Legion's first win of the season was short on anything, drama wasn't it.

That lead would shrink to one, however, with the tying run on third, before reliever Josh Boese struck out John Bohnsach to end the threat and secure the 10-9 victory.

Sikeston got on Jackson starting pitcher Ryan Davis early, scoring five runs in the first and two in the second. Jackson put up two in the first, giving Post 114 a 7-2 edge after two innings.

Each squad would add another three runs in the next four-and-a-half innings of play leaving Sikeston with a 10-5 lead going into the bottom of the seventh.

After starter Ben Freed collected two outs while loading the bases with walks, Limbaugh called on Boese to get the final out.

"He was definitely done," Limbaugh said of Freed, who had thrown over 100 pitches. "I've had him all year and you can tell when he's done. I gave him one more batter and when he walked that guy I went to my other Scott County Central Brave and had him shut it down."

Unfortunately for Post 114, a hard hit fly ball off the center fielder's glove followed by a drive up the middle would score four to make it a one-run ball game.

Things would get even dicier when the next batter hit a grounder to the shortstop who was unable to make a play, leaving the tying run at third and winning run at first.

With the game on the line Boese would draw Bohnsach to a 1-2 count before striking him out swinging to seal the win.

"It makes you nervous when you get in those situations when you think you have it and then they make it interesting," Post 114's Ross Bohannon said.

"We've been playing against some pretty good team's and we finally found someone that's about as talented as we are and we found a way to get a win."

Freed earned the win for Sikeston, going 6 2/3 innings, allowing nine runs on seven hits and six walks. He struck out five, including all three batters in the second.

"We gave up a lot of hits and gave up the runs, but in the key situations he'd get that key out for us and keep us at least in the ball game," Limbaugh said. "That's all you can ask for in a pitcher is to keep us in the ball game and he did that."

At the plate, Sikeston put up eight hits on the game with Bryan Freed and Evan Underwood leading the team with two apiece.

With his squad having their best offensive game of the season, Limbaugh praised his team's efforts at the plate.

"We had good situational hitting," he said. "I thought we did a good job of putting the bat on the ball when it needed to happen.

"With runners in scoring position you're taught to do what you have to do to get them in and they did a great job of that."

The win breaks Sikeston's winless start to the season that included a 14-2 loss to fellow tournament team Dunklin County.

Now that they finally the monkey off their back, Freed hopes Friday's win will help turn things around.

"Feels pretty good," he said. "Hopefully we can start building on wins after this."

CHARLESTON -- Coming into the bottom of the fourth trailing Dunklin County by one, things quickly unraveled for Chaffee's summer league squad.

Post 303 would pump out nine runs in the next three innings to take the game 11-1 in the sixth frame on the mercy rule.

"They hit the ball well," Chaffee's coach Joe Bickings said. "They're a good quality team. "They have some kids from Cooter who just got done with a state championship run."

The Red Devils lone run came in the fourth when Alex Crowe scored from third off a sacrifice fly to center by Alex Davie.

Crowe and Andrew Dooley each collected a hit for Chaffee, both singles in the fourth inning.

Bickings said games like this are a great way for his team to learn.

"We're going to go through our bumps and bruises," he said. "We're just the Chaffee high school team and we're facing everybody else whose gathering from other towns."