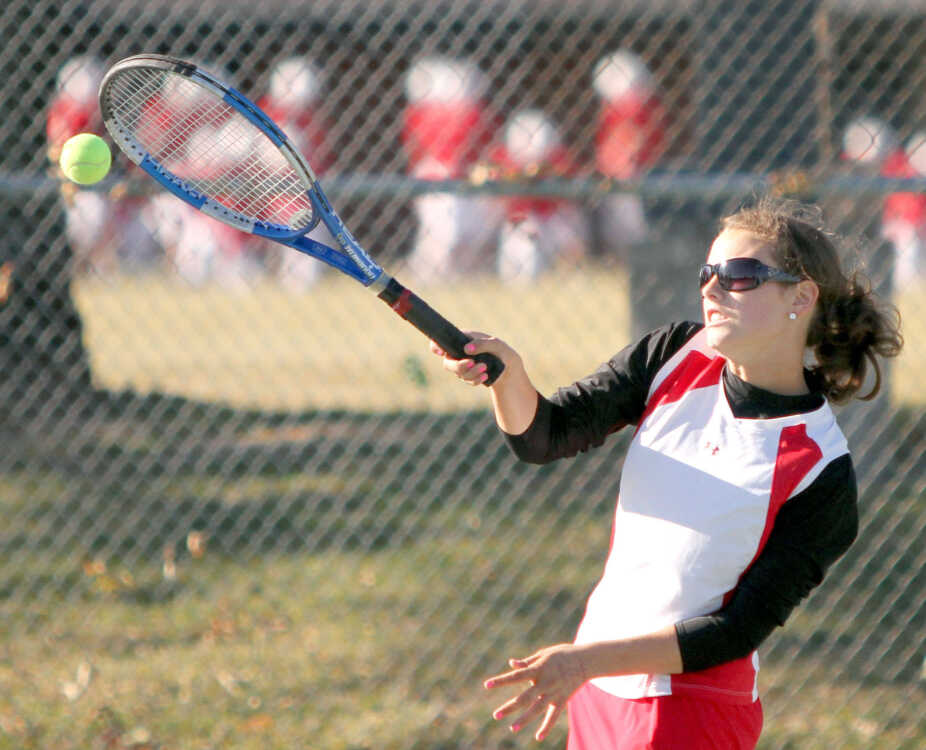 SIKESTON -- Sikeston tennis players Jacarra Lampkin and Kelsey Dial have learned the ins and outs of each other's game.

They've played together as the Lady Bulldogs' No. 1 doubles tandem the entire year which is helpful in knowing what the other can do.

"I know what I can and can't get and what I need to cover," Lampkin said.

"We're used to each other now," said Dial. "It's just common, normal."

They put their commonalities to good use on Monday afternoon, just as they had done all season, to win their first round districts matchup against the Fredericktown Lady Blackcats 6-2 and 6-2 at Sikeston Public High School.

"We did very well today I think," Lampkin said about their doubles match. "My shots were on, (Dial's) shots were on. We were able to hit the doubles alley. If you can hit that doubles alley, that's good too. People don't expect that."

Lampkin and Dial's two set win over Fredericktown's Cristen Pense and Myranda Shafer was left little in doubt. In each set, Dial and Lampkin had to battle back from a small deficit of just one, 2-1 and 1-0, but bounced back winning the next two points giving Sikeston the 3-2 and 2-1 advantage.

From there, the two went on to win handedly.

"I saw much improved play," Sikeston head coach Russ Dial said. "We played (Fredericktown) a lot closer last time and we more or less dominated them today. All the girls stepped up to the plate and played a lot better than what we had been playing. It seemed like it was this way last year too. We got into districts and the light just came on. Today, was the same way."

Both Lampkin and Dial each won their singles matches as well. Lampkin defeated Pense 6-0 and 6-1.

"I try to push my opponent back as far as I can," Dial said about her singles match. "Recently, coach has tried to get me to come up to the net and try and net play in my singles matches. That's what I've tried to do, but today, I wasn't so successful at it but my last match I was."

With Sikeston's No. 1 and No. 2 rolling through their matches, the Lady Bulldogs were assured a team win with victories from Martha Neel and Brooke Partridge.

Neel squeaked out a 6-5 and 6-5 win over Mikaela Tremaine while Partridge defeated Kaycelyn Alexander 6-3 and 6-4.

"It was a big win for Brooke and a big win for Martha as well," coach Dial said. "We kind of knew coming in that we had a good shot of our No. 1 and No. 2 as well as our No. 1 doubles winning. We knew that it was going to be up to the three, four, five and six on whether or not we won this first round match.

"They stepped up to the plate and actually played better than they have all year long."

This year's post season will be a tad different than in years past.

Instead of one huge district tournament involving 13 teams, this year is split into a three day team district with the fourth day being the individual district with both singles and doubles. Sikeston's district includes Charleston, Dexter, Kennett, Caruthersville and Fredericktown.

"It makes it better for us," coach Dial said. "But, what makes it a little bit more difficult to get to state is you have to go to a sectional tournament. It's just one more step in the process.

"It's really to our advantage," he added. "Because it's smaller. That's what I like about it."

Lampkin and Dial will be playing as a doubles team in the individual districts rather than singles. However, although Lampkin likes the new setup, Dial said she would rather play as a team and whoever gets the most wins is a team in districts. She said she doesn't like playing all week and then having to play just by yourself on day four.

But, there is one thing Dial likes about it.

Sikeston is playing Kennett today for the second round.