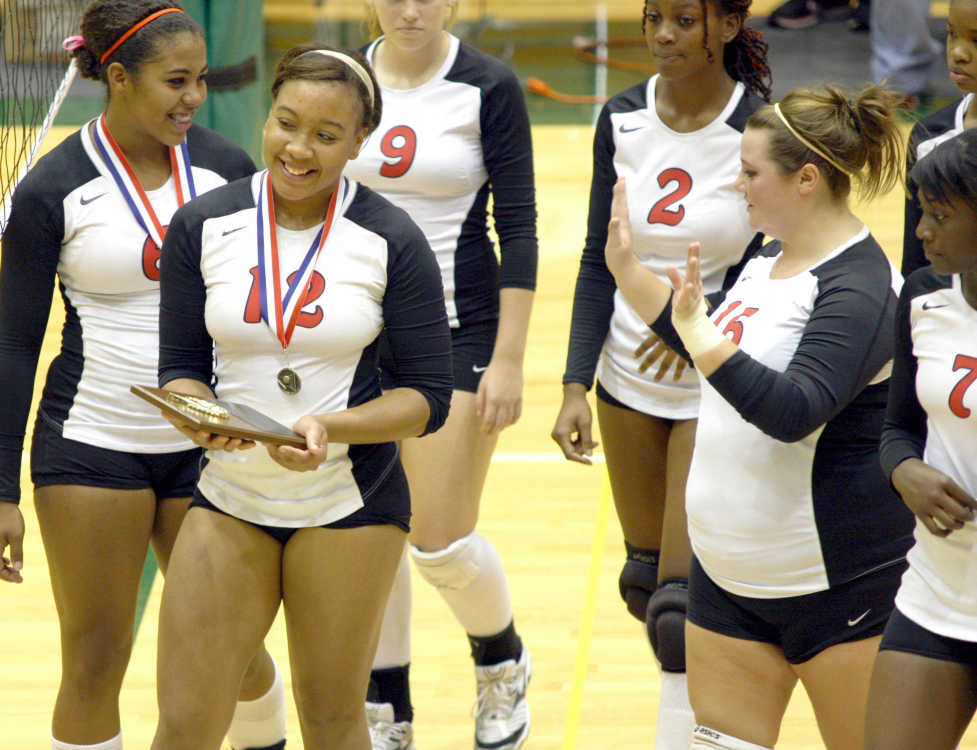 NEW MADRID -- Right before the opening set against the Oran Lady Eagles, Sikeston's six starters ended their huddle with a resounding '3-peat.'

It was a unified cheer signaling their desire to win their third straight SEMO Conference title which, after three sets, they were able to do.

After taking the first set 25-15, Sikeston ran into a bit of trouble in the second.

Oran, coming straight from ousting NMCC to reach the championship game, got out to a commanding 19-11 lead in the second set spearheaded by a flurry of serves from Oran's Amanda Young.

Drawing closer to wrapping up the second set, the Lady Eagles began to slip, however, allowing Sikeston to inch closer and closer as the set moved on. Oran held leads of 20-12, 20-14, 22-16, 23-17 and 24-21 giving the Lady Bulldogs every chance to climb back into the match.

"We were communicating and we finally clicked," Oran head coach Sara Heisserer said about the second set. "Sikeston got a bit rattled and we were able to get a big lead. Anytime you can get a team rattled and you keep the momentum it will be in your favor."

Although Oran was riding high with their second set win backing their confidence, Sikeston's late rally to even make it a nail biter gave the Lady Bulldogs some momentum as well.

The early stages of the third set wound up as a 10-10 affair. Sikeston, however, rallied for an 8-2 run separating themselves from the Lady Eagles. The Lady Bulldogs eventually won the set, 25-18, on a point by Quesha Howard, sealing their third straight conference championship.

"At first, I thought we weren't because we dug ourselves a big hole and I didn't think we were going to come out of it,' Liggins said, who led her team with eight kills. "But, I'm glad we played three and were able to pull through because we wanted it."

"I felt like we did what we should have done," Sikeston head coach Steve Beydler said. "It got a little close there in the second game, which you have to give (Oran) credit. They fought and stuck with it and my girls started to play really tight.

"I was pleased with them though because we were down tremendously and they came back. At that point I felt pretty good about it going into a third set. All in all, it was a good weekend for us. I'm pleased to be where we are."

Sikeston and Oran each have matches scheduled for tonight. Sikeston will travel to Bell City while Oran hosts Oak Ridge.

Liggins, Greer and Young all made the All-Tournament team following the match as did NMCC's Kelly Robey, Karen McGlossen and Charleston's Stacia Manning.