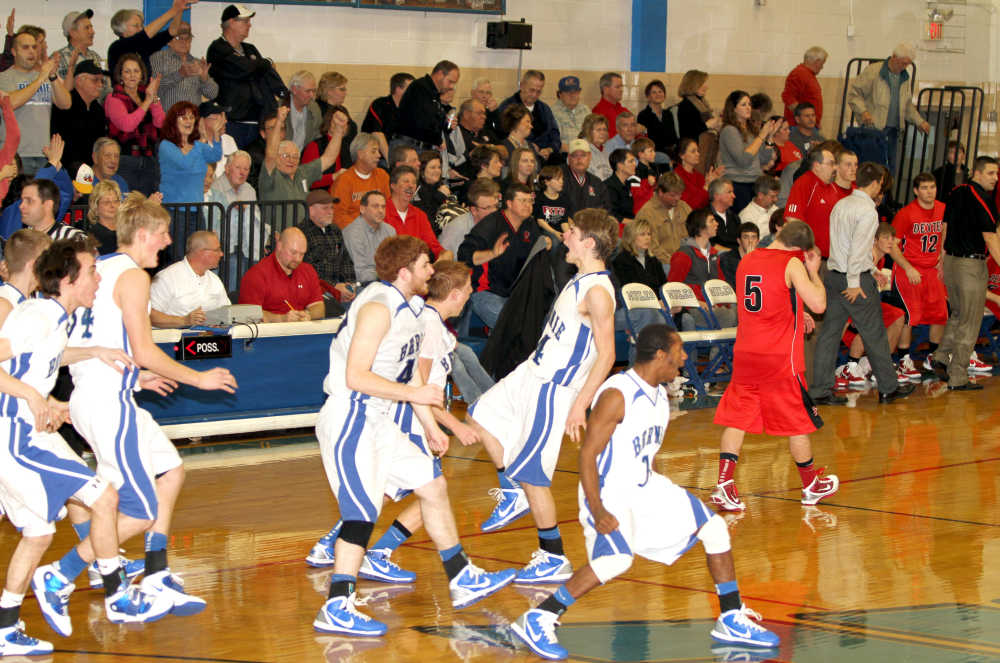 The Bernie Mules rush the floor after defeating the Dexter Bearcats 61-55 on Friday night in Bernie. (David Jenkins, Staff)

BERNIE -- Following up one of the greatest seasons in the history of the school in which they made it all the way to the Class 2 state championship game, this year's Bernie Mules have been a team searching for that one statement victory that assures them that they are once again a contender.

Perhaps the Mules got that win as they defeated arch rival Dexter, 61-55, in front of a jam-packed Bernie gymnasium on Friday night.

Following the victory, Bernie's players exploded into a celebration as if they had clinched a championship. Bernie coach Brad Botsch said the game's meaning ran deep for his team this season.

"I think our team was the underdog in that game -- we're not used to the underdog role," Botsch said. "We have really one returning varsity player and they really haven't won a giant game just yet. I think that's real emotional for them. More than anything it was an electric atmosphere in here tonight and these fans kept the kids going."

The victory marked Bernie's sixth straight against Dexter dating back to Jan. 11, 2008.

Bernie senior standout Jordan McGowan, who led the Mules with 22 points, indicated that the emotion of playing their biggest rival in front of a capacity home crowd is what triggered the celebration.

"It's our rival -- nothing like tonight -- a packed house. It was great," McGowan said. "This game was big because it's a natural rivalry we have with them. It's a big game going into county tournament time. That was for the one seed right there."

The Mules never trailed in the game and led by as much as 11 points on three separate occasions in the third quarter, but they couldn't shake the Bearcats.

Dexter's 6-foot-7 Division I signee Alan Flannigan began to take over in the fourth, scoring 11 of his game-high 28 points.

The Bearcats eventually tied the score for the first time all night on a short floater by Jake Cox, making it 50-50 with 3:37 left in the game.

But Bernie just wouldn't be denied on this night as senior reserve Marcus Robertson came up with the biggest play of the night with 11 seconds left.

After Flannigan followed up his own missed shot with 13 seconds to go to cut Bernie's lead to 57-55, Nichols called a timeout to stop the clock.

But it gave Botsch a chance to draw up an inbounds play for the unlikeliest player on the floor, sending Robertson streaking down the floor for a layup and the foul with 11 seconds left. Robertson converted the free throw to give Bernie a 60-55 lead to ice the game.

Just moments prior to that, Robertson had missed two free throws, but he got sweet vindication in the end.

"I was just so happy I made it because I knew we won it," Robertson said after the game with his teammates still chanting his name. "I got a little nervous on the free throw, because I only made one on the season so far, but it went in. It was just a great moment."

The Mules struggled in closing out the game from the free throw line, missing five straight at one point and going just 11-24 in the fourth quarter, leaving the door wide open for Dexter to take control of the game.

But despite the poor free throw shooting, Bernie's defense consistently forced Dexter into bad shot selections and they were able to stay on the boards against the bigger Bearcats.

"Every mistake we made, they made us pay for it," Dexter coach Rob Nichols said. "Defensively I just thought we were very poor tonight -- not a lot of intensity. I just feel like we didn't play with a lot of passion for the game, and they did. Bernie's kids play hard, they execute, they did what it took the win the basketball game. We didn't."

Bernie came out of the gates strong, jumping out to a 5-0 lead and maintaining that lead for most of the night.

McGowan was doing the majority of the damage, connecting on three 3-pointers in the first quarter to stake his team to a 17-12 advantage.

The Mules continued to keep the pressure on in the second quarter as they sank into a zone, trying to make sure Flannigan wasn't going to beat them inside.

Flannigan still had 14 points in the first half with a pair of 3-pointers, but he wasn't dominating the paint like Nichols had hoped.

"He's the kind of player that likes to pop out and show his outside game at times," Nichols said. "Against some of these teams he has a big size advantage we'd like to try to keep him inside as much as possible to try and do our damage in there. But they did a good job, they were doubling and tripling at times. We've got to have more guys step up and take shots and score for us. We just had one guy in double digits and that's not going to do it against good basketball teams."

With a driving shot at the buzzer by Jesse Shelton, Bernie took a 30-24 lead into halftime with the home crowd roaring behind them.

McGowan, who is the only player on the team that saw significant minutes on last year's state runner-up squad, scored 17 points in the first half and also did played strong defense on Flannigan.

"Jordan is kind of the caretaker of the team," Botsch said. "He looks out for everybody else and gets people where they are supposed to get. He's a four-year varsity player. He's had a great career here. He's kind of the heart and soul and the rest of the kids buy into what he wants them to do. If you want to print anything, Jordan is the epitome of what a coach wants to coach -- the type of kid that a coach wants to coach. He does everything you ask him to do. He's always been around the gym. If you were to mold a player, he would be the type of player you'd want to mold."

Bernie's momentum carried over into the third quarter building its biggest lead of the game before settling for a 46-37 lead heading into the fourth quarter.

Then Flannigan took over, scoring a conventional 3-point play to start the quarter and then draining a 3-pointer from deep in the corner in front of his own bench to cut the Bernie lead to 48-45. Later, he scored on an offensive putback to cut the score to 50-48, one of 15 rebounds he had in the game.

Sensing the game possibly slipping away, Botsch decided to call a timeout to settle his team down.

"I really just didn't want them to panic," Botsch said. "Sometimes when you get a bigger school playing you and they've got a great athlete like Flannigan out there, you can get rattled. We've got a couple kids that didn't even play last year and they're learning as we go. I think it was important just not to panic."

While the Mules didn't take care of business from the foul line, it was their defense and tenacity in the rebounding department that proved to be the aspect that carried them down the stretch.

"Our kids came out with a lot of intensity and a lot of passion," Botsch said. "We've had the whole week to prepare for them. I think our kids just showed a lot of guts tonight. We're not flashy, and we're not great offensively and we're not great defensively, but you really can't fault the guts that they have because they sure played a physical game tonight and they found a way to get it done."

"It's a tough place to play," Nichols said. "Any time Bernie's got a good team they pack this gym and they always play well here. Whether they're having a great season or an average season they're going to be tough for anybody to come down here and beat."