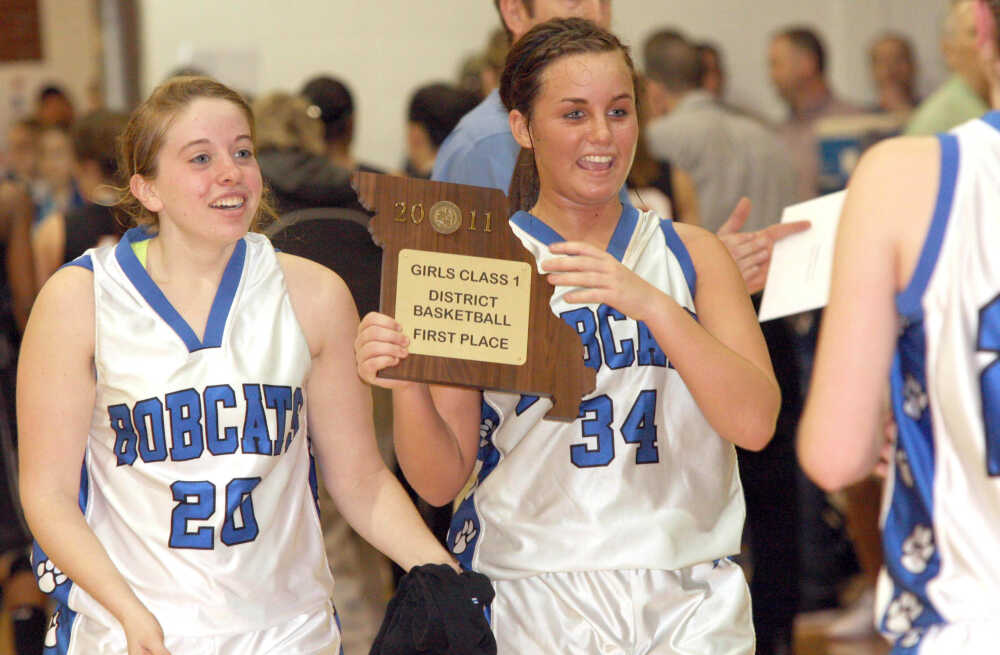 DELTA -- For the better part of three quarters, the Scott County Central Bravettes put a scare into the Delta Lady Bearcats.

However, Delta heated up from the perimeter and extended their season with a 60-47 win over the Bravettes to claim the Class 1, District 2 girls championship on Thursday at Delta High School.

"We gave them a run for their money," Scott Central coach Semona Penrod said. "We came out with a lot of intensity," Penrod said. "I thought we really played well. I've seen this grow throughout the season. But, I was really proud of the intensity."

Scott Central, who in two games earlier in the season fell to Delta by 27 and 26 points, turned up the defensive pressure in the first half causing numerous 10 second violations and steals. The young Bravettes squad forced 20 turnovers in the first half.

"Scott Central did a real good job with their press in the first half," Delta coach Randy White said. "We didn't attack it very well to say the least. Once we handled the press, we were alright."

Scott Central's defense led to a late advantage in the second quarter. Three consecutive steals by the Bravettes, which led to three-straight baskets by Blissett, put them ahead 26-22 with just under two minutes left in the half.

A 3-pointer from Fort gave the Bravettes their biggest lead of the night, 29-24, with 38 seconds left.

Delta's Tori Burton, who finished with 17 points, hit a shot before the half to end the second quarter with the Bravettes ahead, 29-26.

"One thing that I think is a plus for us is that they've worked really hard to learn how to run the press efficiently," Penrod said. "They've gained a lot of momentum and gained a lot of ground as far as running the press."

After a basket from Gillespie, Scott Central still led in the third quarter, 35-32.

But the hot-handed Lady Bobcats began to heat up as they drained six 3-pointers from that point on.

"We got that little lead and then in the third quarter, they were on fire with their three's," Penrod said. "We couldn't answer. I think we got a little frustrated and dropped our heads and, again, I think that may have a little bit to do with youth."

Samantha Bartels hit three in the quarter along with Burton, who sank two. Burton tied the game at 35, while Bartels put Delta ahed for good in their next possession, 38-35.

"They can shoot the ball," White said. "But, we had to get it across court to where we could get the shot. You turn the ball over, you're taking away scoring opportunities and we took too many away in the first half."

With a comfortable 54-43 lead in hand, Delta began to scale back as far as momentum. They worked the ball around as much as they could to work time off the clock, but also, look to score in the process.

"We're always looking to score," White said. "But, we felt like we could take control of the game by doing that."

The Lady Bobcats did hold on for the district championship making it their 15th title overall.

The Bravettes finished with a 4-16 record but will return a slew of experience as their two oldest players are sophomores.

"I said, 'girls you've got to look up,'" Penrod said. "'You don't have anything to be ashamed of and you've got a great future ahead of you as long as you're willing to work as hard as you have to this point.'

"It should be a different story by next year."