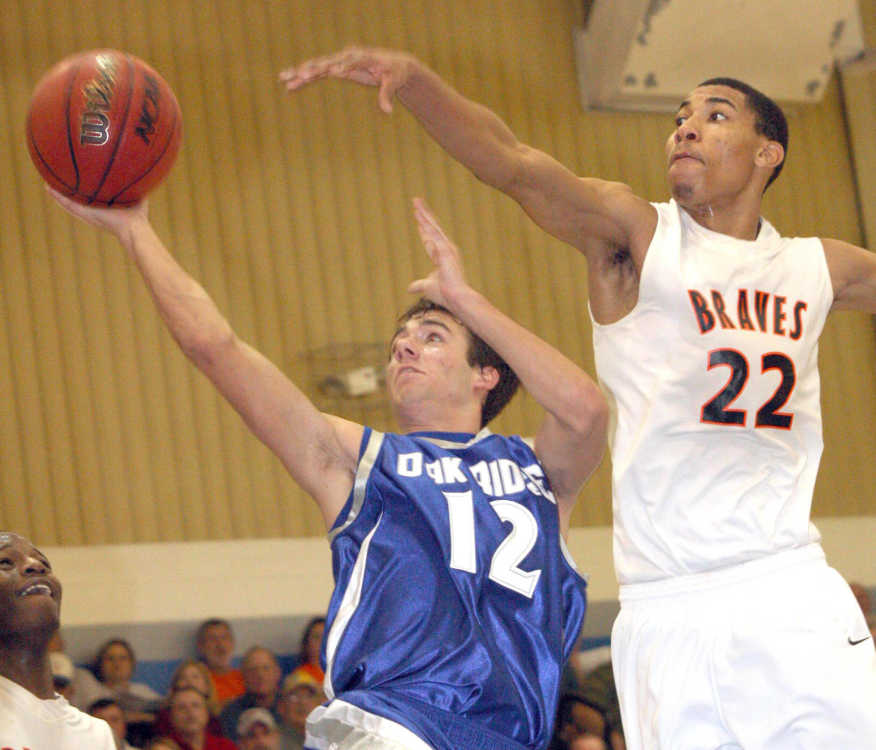 DELTA -- The line stretched from the locker room door, all the way to the gym floor.

He signed every last one of their hats, shirts, phone covers, dollar bills and ESPN Rise magazines with his picture gracing the cover. Some kids even took their shoes off their own feet for Porter to sign.

It's not the first time he's been asked for his John Hancock, but it was a fan frenzy at Delta High School, nonetheless.

"This is by far the biggest group," Porter said about the autograph hopefuls.

The top-seeded Braves cruised to a 67-30 victory for the district crown -- their seventh-straight and 27th title overall.

Scott Central (25-2) will play District 1 winner Risco on Tuesday in Sectionals at the Bearcat Event Center in Dexter at 6 p.m.

"We want it bad," Porter said about their district championship. "We played real hard and wanted it for us seniors."

What may be more impressive about his 32-point performance was that Oak Ridge took drastic measures to keep Porter, and the rest of his teammates, from touching the ball.

Although it had little affect, the Blue Jays slowed the pace dramatically for most of the first quarter and into the second.

Oak Ridge recorded their first field goal attempt with just over three minutes left in the first. They remained content on passing around the perimeter, waiting for sure that an open shot came their way.

"We know we probably wasn't going to be in the lead in the fourth quarter," Oak Ridge coach Adam Stoneking said, "but we wanted to make it a game. Most of their starters haven't played in the fourth quarter since Christmas. Maybe they start missing shots and start throwing it away in a close game.

"We wanted to get them in that situation and see how they play."

Oak Ridge's Kyle Rohde drained their first open look from behind the arc. The Blue Jays took just three shots in the opening quarter -- one being a desperation heave at the buzzer. But, the Braves still led 8-5.

"We knew they were going to try and hold the ball," Porter said. "We just wanted to get up early so when they stalled, we're already up. We tried to speed them back up and run our offense and pick up steals.

"We know teams are going to do (slow it down) around this time of year. We just have to get prepared for it."

Not fazed in the least by Oak Ridge's tactic, Porter scored the game's first six points which included a rim rocking, one-handed dunk within the first minute.

Porter scored six more points to end the first quarter to help give the Braves a 14-5 lead.

"Otto's tough," said Stoneking. "He's an All-American for a reason. He took about 10 or 12 shots that most coaches would be yelling at their players for and he just drops them like they're nothing."

As the Blue Jays began to shoot the ball more, Scott Central's lead began to grow.

Oak Ridge went 2 for 7 in the second quarter keeping their quarterly average at five points a frame. The Braves forced a few more turnovers while the Blue Jays tried breaking the press which led to easy scores at the other end.

Reggie Woodson gave the Braves a big lift in the second quarter scoring six of his 12 points. Woodson, who finished with seven steals, picked off passes and darted to the rim for easy scores.

SCC ended up with 28 steals throughout the contest and led 33-10 at halftime.

"They just make you tired," Stoneking said. "They wear you out and it seems like they never slow down. They're a machine. When you get tired and make a mistake, they will make you pay for it."

Porter, who shot 77 percent (14 of 18) from the floor, scored 10 more points in the third quarter. Brett Thomas, who led Oak Ridge with 11 points, paced his team with three, 3-pointers in that same frame.

The Blue Jays had the most success scoring from the outside knocking down seven 3-pointers.

"They can shoot the ball," Scott Central coach Kenyon Wright said about Oak Ridge. "That's their game. They hit those shots and done a good job of knocking them down."

Despite Oak Ridge's hot shooting, Scott Central held a comfortable 55-21 lead after the third quarter and had a firm grip on yet another Sectional round trip.