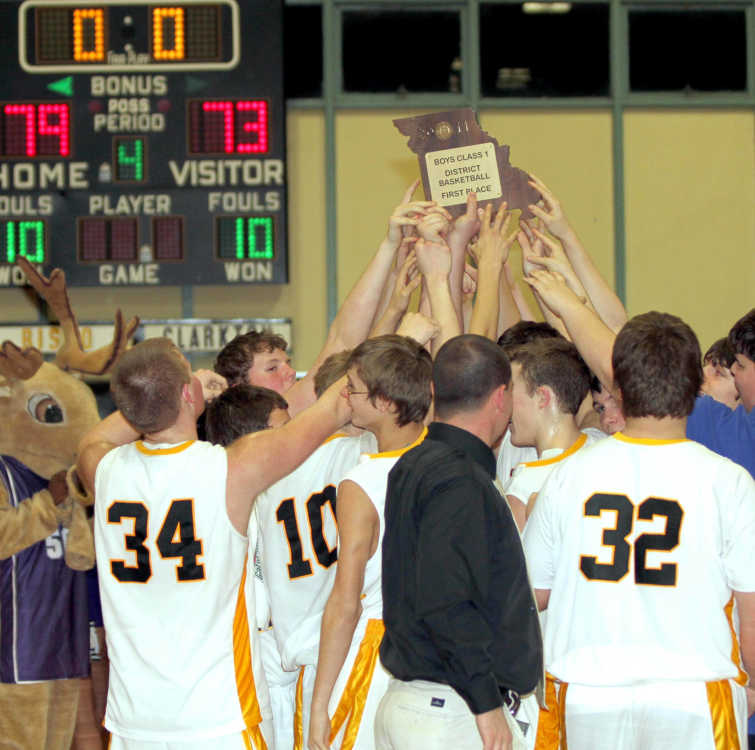 Risco players and coaches celebrate with the Class 1, District 1 plaque after defeating Clarkton 79-73 in the district title game. (Photo by David Jenkins, Staff)

GIDEON -- Prior to last season, the Risco Tigers had won one district title in school history. On Thursday night, the Tigers used the experience they garnered from last season's district title to defeat Clarkton 79-73 in the Class 1, District 1 championship game.

"We talked about (experience) all week," said Risco head coach Brandon Blankenship. "At least half of this team that played tonight was here last year. I told them 'you guys should have confidence because you've been here.' I think it was a factor tonight."

Risco's experience could be seen at times all night, but none more than in the fourth quarter when Clarkton cut a 10-point Risco lead down to four, 62-58 with just under five minutes to play.

Instead of panicking, the Risco guards, led by Luke Bixler and Chris Pavy, sliced through the Reindeer full-court press and scored several easy baskets to keep Clarkton at bay.

Bixler and Pavy combined to score 15 fourth-quarter points, many of which came from getting to the basket after breaking the Clarkton press.

"Not very many teams are going to be able to press us with four really fast guards that can see the floor," Pavy said. "Coach said to attack the basket and either open up or get a drive and we knew that a couple of their big guys had four fouls and they were going to foul out or let us go."

But while Risco was getting to the basket seemingly at will, Clarkton continued to score as well, matching the Tigers basket-for-basket for much of the last five minutes of the game.

"The kids, they battled and battled, they put themselves in a situation to come back and win that game, " Clarkton coach Rob Harlow said. "It seemed like every time we would get (within four) one of those lighting-quick guards would make a play for Risco to score."

Reindeer leading scorer Logan Blackburn hit a long, contested 3-pointer with 50 seconds remaining, cutting the Risco advantage to 75-71, but a pair of Bixler free throws with 29 seconds remaining, followed by an Austin White basket with 11 seconds left that gave the Tigers a comfortable 79-71 lead that held, as Clarkton hit only two free throws with five seconds left.

While Risco held off the Clarkton rally to win the game in the fourth, it was the Tigers' third quarter that was the key to the game.

The two teams were deadlocked at 32-32 at halftime but Risco came out of the locker rooms with an emphasis on penetrating to the basket, which in turn got the Clarkton big men in foul trouble.

The Tigers opened the quarter on a 12-5 run, with half of those points coming from the free throw line as a result of Clarkton fouls.

"We knew a couple of their bigs had a couple fouls already with two or three fouls so that was part of the goal was to try and get going to the goal," Blankenship said. "That's been part of our game, penetration with our guards and that really worked out for us."

"I think fatigue may have set in some," Harlow said. "We got some of our bigs in foul trouble. The pace of the game got to Risco's pace where we really are not capable of running with."

As the pace got away from Clarkton in the second half, the first half saw the Reindeer play a slower, more controlled style.

The Reindeer then went on a run of their own to open the second quarter, building a 32-24 lead with 1:51 remaining in the half. Risco once again used their experience and didn't panic and turning up their defensive pressure to force several turnovers in the final minutes of the half, converting them into easy baskets. The Tigers were then able to tie the game 32-32 when White hit two free throws with 10 seconds left.

When the Risco defense wasn't forcing turnovers, it was taking Blackburn out of the game, holding the sharp-shooter to only four first half points.

"I had to go all out and try to stop him from getting his points," said White who was tasked with stopping Blackburn. "He scores 20 points a game and I was just trying to keep him in single digits or less."

"He's just our sophomore and he's our kid who does every little thing we need," Blankenship said of White. "The last time we played Clarkton and this time his job was to guard Logan Blackburn and I thought he did a great job both times. Just any scoring he gives us is just gravy."

Blackburn finished with a team-high 22 points, 12 of which came in the final quarter. Jones added 17 points for Clarkton while pulling down eight rebounds.

Bixler led Risco with a game-high 27 points to go along with White's 21. Pavy also finished in double figures scoring 14 points.

With the win, Risco improves to 20-7 and for the first time in school history has back-to-back district titles.

"It is just as sweet," Blankenship said of the title. "With this group of kids, they have been such a fine bunch to coach and I love every one of them. I've been blessed with a great group of kids. And it is 20 wins for us which is the first time since 1974 or 75 we've had a 20 win season. It doesn't get any sweeter."

Risco will be back in action at 6 p.m. Tuesday when they take on Scott County Central in a Class 1 sectional at the Bearcat Event Center in Dexter.