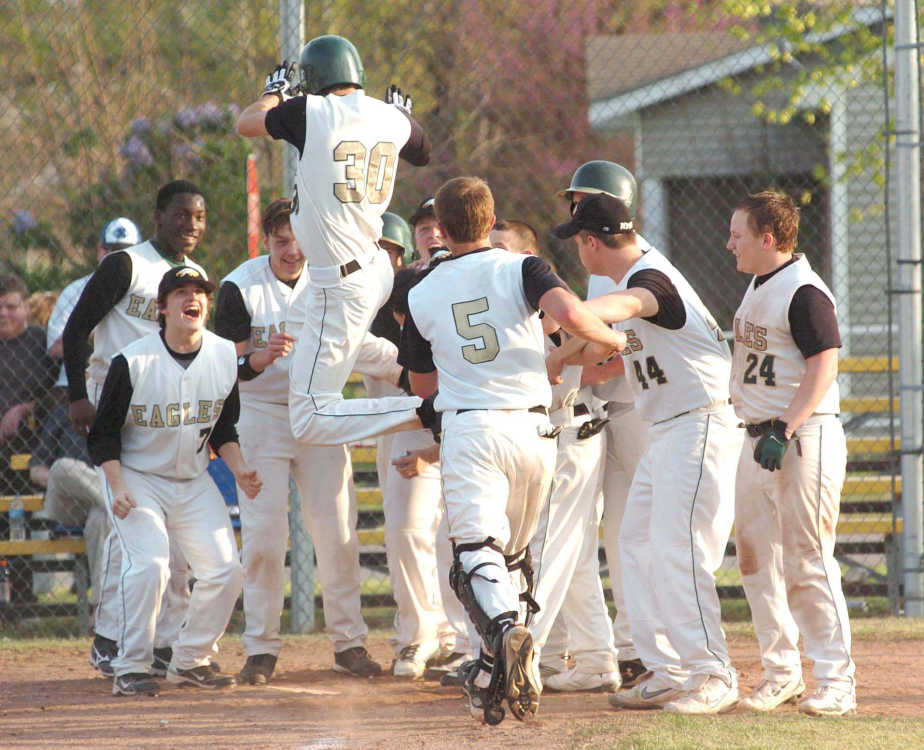 NEW MADRID -- Just when it looked like New Madrid County Central might let another big lead slip through their hands, this time Friday against visiting Charleston, the Eagles were saved by a hot final two innings at the plate.

Having opened the season watching a four-run lead slip away in the seventh against Caruthersville, NMCC likely had a quick deja vu moment when the Bluejays rallied for three runs in the fifth that cut a five-run Eagle lead down to two.

Not content to watch another win slip through their hands, however, NMCC stepped to the plate in the bottom of the fifth and belted out five runs off three home runs en rout to a 15-6 final.

"I was pretty fired up," NMCC's Kyle Harris said of the rally. "We might have got a little too fired up, but these past two years have been rough (for our team) so it feels good to be like that."

With the Eagles' batting around the order in the frame, Harris got things going with one out when he hit a solo shot over the left field fence.

Before the Bluejays could record another out, both Timmy Clayton and Denton Daugherty were able to close NMCC's drive by hitting a pair of two run shots, also to left, to put the Eagles up 13-6 heading into the sixth.

Scoring another two runs in the bottom of the sixth off a pair of hits and an error on Charleston's third baseman, gave the Eagles the nine-run advantage they ended the game with.

"It's an improvement each ball game," NMCC coach John Jones said. "That's what, as a coach, you like to see.

"It's one or two little things we're getting better at each time and eventually you will have all the components together to be a solid ball club."

Though he allowed six runs in the contest, NMCC starting pitcher Daugherty got the outs when he needed them the most. Protecting his team's newly padded lead, Daugherty induced a double play with runners on first and second in the sixth before striking out the side in the seventh to seal the win.

"I was rusty at first," Daugherty said. "But I think I did pretty well towards the end."

Added Jones, "He's one of those type of kids where it takes him awhile to get loose and to find his spot. He'll work with an umpire and find out what he can pitch, what he can't and what the umpires are looking for.

"More times than not he'll zero in on that spot and he'll get the calls. That's basically what he done today."

On offense, the Eagles combined for 16 hits on the contest, including four home runs. Collin Ivie led the way going 4 for 4 with a double while Gabe Smith was 3 for 4 with a home run. Harris, Clayton and Jayshawn McDaniels all contributed a pair of hits to NMCC's cause.

Driving Charleston's offense, shortstop James Naile went 2 for 3 on an afternoon where the Bluejays collected four hits total. Naile hit a two-run home run in the first to give his team an early lead before driving in a third run in the fifth with a double.

Danny McKinney added a two-run home run to Charleston's cause in the fifth with Marshall Stalling chipping in the Bluejays final hit of the night in the sixth, a single.

"We swung the bats and right now it's one of those things we're looking for positives so we'll take nothing but positives out of here," Charleston coach Michael Minner said. "We hit some home runs, we hit some balls hard. We did some good things."

"Defensively we have to get better. Often times if you don't play defense you're not in the ball game and that was evident today."