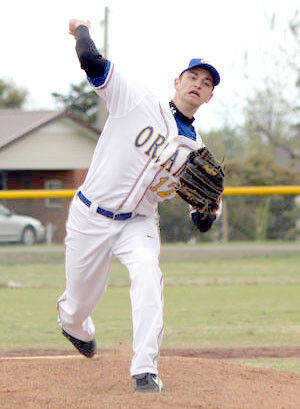 MALDEN -- The Oran Eagles finished their stint at the Malden Invitational Tournament with an unblemished record.

After defeating Holcomb and Neelyville on Friday evening, the Eagles escaped the Portageville Bulldogs 2-0 and then pounded the host team Malden Green Wave 14-2 on Saturday in Malden.

Zac Chasteen picked up the win against Portageville surrendering four hits and one walk while striking out five. Chasteen pitched 6 2/3 innings before giving way to Kody Moore who closed out the win.

Nolan Urhahn and Seth Ressel each led the Eagles with two hits apiece. Ressel added a triple and an RBI.

Mason Kellams was the losing pitcher for Portageville. He threw six innings and gave up seven hits, one walk and one earned run. Kellams also struck out three.

MALDEN -- After a narrow victory over Portageville, Oran unloaded a barrage of hits and defeated Malden 14-2.

The Eagles sprayed 14 hits including three from Urhahn, who finished 3 for 4 at the plate which included a double.

Elfrink got the start on the mound as well pitching all seven innings. He gave up two runs on four hits and three walks. Elfrink struck out eight.

Oran (11-0) will be back in action on Tuesday when they host Saxony Lutheran at 4 p.m.