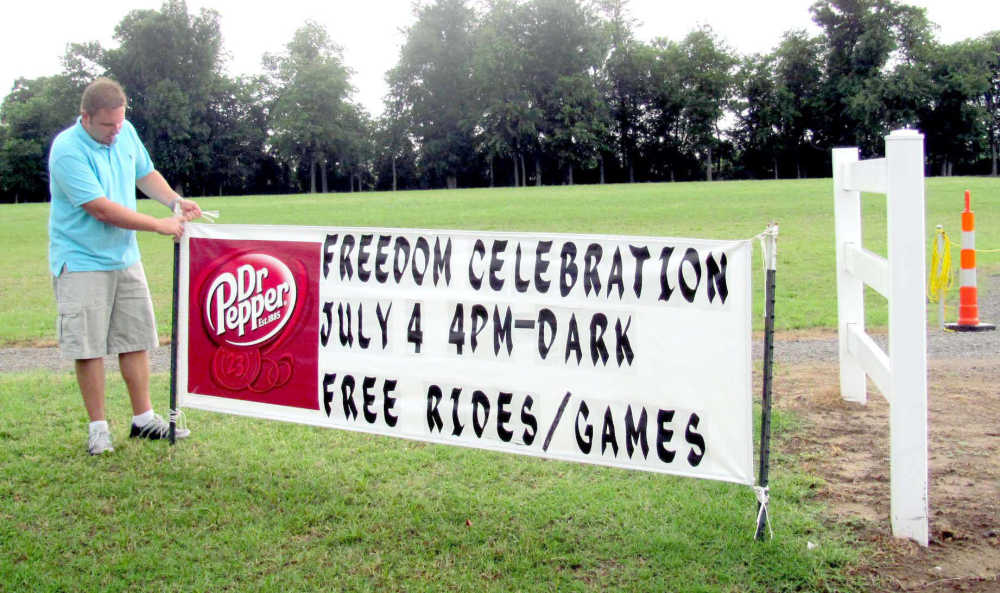 Dwayne Maynard, pastor of the First Assembly of God Church in Sikeston, fastens a sign promoting Monday's Freedom Celebration at the church's recreation complex on North Ingram. The land behind him will look a little different on Monday, with several games, vendors, a car show and more planned. Michelle Felter, Staff

SIKESTON -- When Dwayne Maynard moved to Sikeston last year to take over as pastor at the First Assembly of God Church, he noticed something missing.

"There's not a lot going on during the Fourth of July in Sikeston other than the fireworks show," said Maynard. "So I thought this was a huge opportunity for us to reach out and give back to the community on a day that everyone is looking to celebrate."

So this year, he and members of the church worked to pull together the first Freedom Celebration, planned for 4 p.m. to dark Monday at the church's recreation complex, 1221 N. Ingram.

"We really planned this with the community in mind," said Maynard. He noted that there really is something for those of all ages at the Celebration -- which was intended.

Admission to the event is free, as are most of the activities. Maynard noted that while he feels the Church has gained a reputation where it is always asking community members for something "this is the exact opposite -- we are giving with no strings attached. We as a church want to give back to our community."

Throughout the day, there will be free children's events including inflatables, a kiddie train, horseback riding, face painting, carnival games and a play area.

"Throughout the afternoon, we'll have professional skydivers dropping with American flags and streams of red, white and blue smoke," said Maynard.

Also there will be all-American food served for a fee, more than 15 craft vendors, an air show, National Guard display, police cars and fire trucks for children to see and the Air Evac Life team. A car show with more than 20 classes will be held, plus a softball tournament.

Throughout the event, there will be entertainment on the grand stage.

To read more about the event, check out the June 29 edition of the Standard Democrat.