Woodpeckers' season comes to an end 17-4 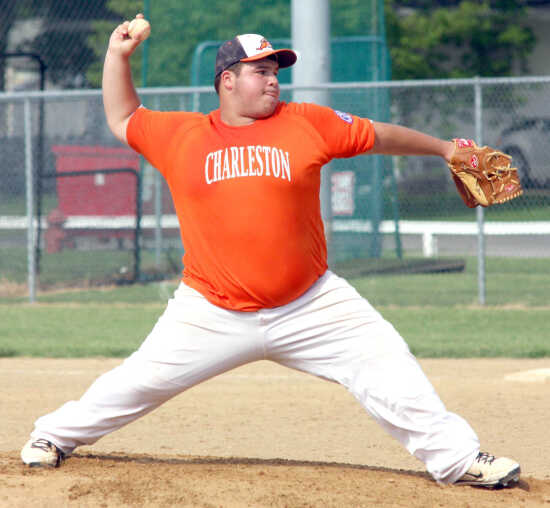 Charleston's Ryan Housman delivers a pitch to a Mineral Area hitter on Friday afternoon in the Missouri Senior Babe Ruth Tournament being played at Chaffee. (Photo by Chris Pobst, Staff)

CHAFFEE -- The Charleston Woodpeckers were eliminated from the state tournament on Friday at the hands of Mineral Area, 17-4.

After falling behind by an 8-0 margin, the Woodpeckers fought back to cut the deficit in half with four runs in the fourth inning.

But, Mineral Area tacked on nine more runs throughout the remaining three innings to shut the book on Charleston.

"We gave ourselves a chance," Bucher said. "We gave up yet another big inning and those will always haunt you.

"Trey threw his butt off," Bucher said. "Each one of his starts has gotten better over the course of this year."

In their first year of existence, Charleston head coach Paul Bucher was proud of his teams improvement throughout the year.

"Overall, it went fairly well," Bucher said about their season as a whole. "We started out pretty hot and thought we were going to be a little bit better than what we ended up, record-wise. Each one of our kids got better and that's really the ultimate goal of summer baseball programs. You want to win, but you want to get better."

Mineral Area, who has already suffered one loss to Jackson in the first round of the tournament, played Booneville on Saturday. Both of those teams are fighting for their playoff lives as one loss will send them home.