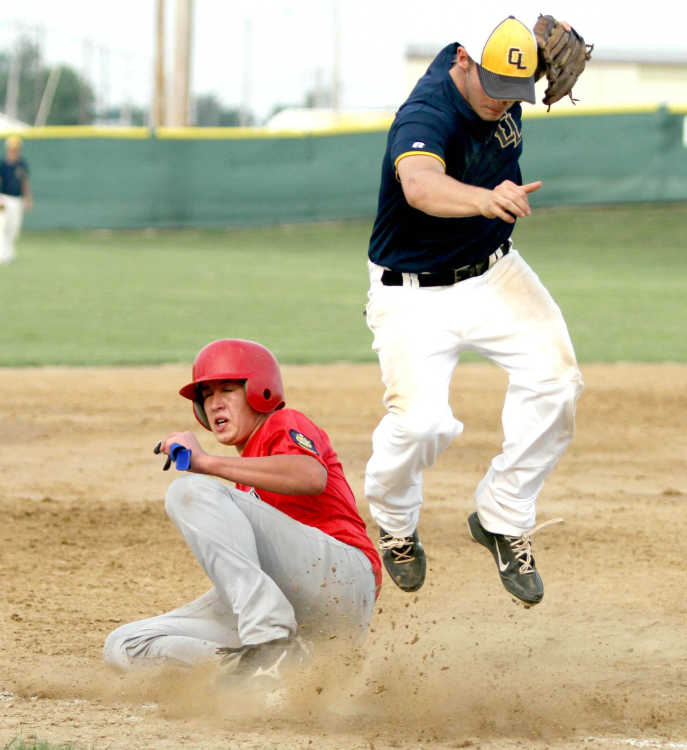 SIKESTON -- The Sikeston Senior Legion Post 114 baseball team hasn't won as many games as they would have hoped this season, but coach Chris Crosby always felt his team could make some racket in a long, grinding district tournament.

Third-seeded Post 114 did just that on Friday with an 8-5 District 14 first round victory over second-seeded and defending district champion Cape Girardeau Post 63 at VFW Stadium.

Sikeston played top-seeded Dunklin County on Saturday in the semifinals of the tournament but results were not available at press time. Dunklin County defeated fourth seeded Jackson 5-0 on the strength of Tyler Thompson's eye-popping 20-strikeout performance.

On Friday night, Crosby knew that his team was sitting in a good position for Saturday's game against Dunklin County, particularly with the standout Thompson already being used in the first round.

"I've said it and I've said it, anybody in this tournament has a chance," Crosby said. "We don't have the name dominant pitcher that some of the other clubs have, but I think as a staff we can match up with any of these guys. Coming into the tournament, I felt good that we had a chance."

Sikeston's Trey Tigart provided the biggest shot in the arm with a complete game victory, throwing all nine innings on 120 pitches for Post 114.

"It's really huge to throw a complete game," Crosby said of Tigart. "For one it saves one of our other pitchers. He threw a whale of a game. I really can't talk enough about how well he threw. There were innings that he should've been out of it with just a few pitches thrown. We'd make an error, but he he didn't compound it. He didn't walk guys. He'd just stick it in there and get ground balls and we'd come back and make plays for him."

Cape Post 63 (26-12) cut the lead to 5-3 in the top of the sixth but they wouldn't get any closer as Sikeston answered with three runs in the bottom of the sixth to put the game out of reach.

"I think we kind of came out and played a little dead," Cape Post 63 coach Todd Pennington said. "We weren't ready to go when we got here. They're supposed to come out every day ready to play and they weren't today. We've had a week off. It's tough just to practice and be ready for a game, but that's no excuse. You've got to be ready for the game. Sikeston was the better team today. They just played well, got big hits, and we didn't. You've got to tip your hat."

Sikeston picked up most of its offense from the bottom half of the batting order. Five of the team's 10 hits and six of eight runs came from the 5-through-9 hitters.

"You really can't ever expect that kind of offense against that quality of club," Crosby said. "The top of our lineup has done it all year, but the biggest thing today was the lower part. That was the biggest difference."

In the second, Ben Freed scored on Caleb McCord's sacrifice fly. Alex Heuring then scored on a wild pitch to give Post 114 the early 2-0 lead.

In the fourth, Jimmy Ash and Jared Yates each had RBI-singles and McCord added another sacrifice fly to lead 5-1.

After Cape cut the lead to 5-3 in the top of the sixth, Sikeston scored three runs with Yates providing a sacrifice fly. Post 63 committed two errors in the inning to help Sikeston's cause.

"The game just kind of sped up on us," Pennington said of his team's defensive breakdowns in the sixth. "They capitalized on it and we just didn't come back from it."

Cape Post 63 scored two runs in the top of the ninth. They had runners on first and third and the tying run at the plate, but Tigart was able to get Brent Taylor to bounce into a 5-3 groundout to secure the victory.

It was one of 13 ground ball outs that Tigart induced on the Cape hitters.

Tigart scattered nine hits and allowed three walks with three strikeouts. Only one of his five runs allowed was earned.

Ross Bohannon led Sikeston with three hits and a run scored. Heuring went 2-4 with a double and three runs scored. Ash went 2-4 with two runs and an RBI.

"Today we made some errors but we also made some plays and we swung the bats really, really well," Crosby said.