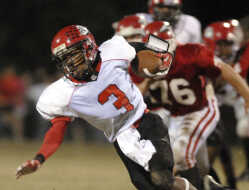 JACKSON -- The Sikeston Bulldogs won their fourth straight game with a 35-9 victory at Jackson on Friday.

Sikeston (4-1) scored 21 points in the first quarter and rolled up 406 yards of offense in the game to defeat the Indians for the third straight time.

Bulldog senior James Watson finished with 176 yards rushing on 29 carries with a pair of touchdowns and junior running back Kyland Gross followed up with 101 yards on 11 carries with two scores.

Sikeston's defense limited the Indians (1-4) to just 113 yards of offense on the night.

It's Sikeston's first win on Jackson's home field since 2002.