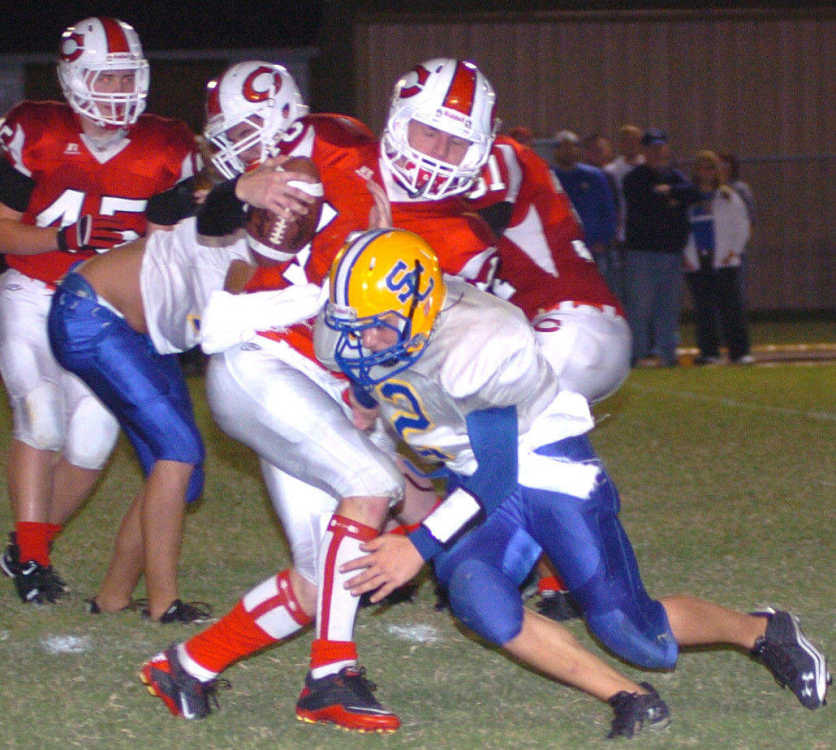 Shortly after the Red Devils had closed to within a score early in the fourth quarter, Cotner fielded the ensuing kick at his own 15-yard line. Darting left, Cotner found a few key blocks before racing 85 yards down the field and into the end zone to push the Rams lead to 14 with 8:45 to play.

"That was huge," Scott City coach Jim May said of the return. "That was a momentum swing like nobody's business. We thought we were close to breaking the first couple (of returns) and we knew were just one block away.

"Once we got that block we knew that when Cotner got free he was going to go so that was a good play."

Taking over after an interception at midfield on Chaffee's next possession, the Rams worked their way back into the end zone one last time, scoring on a 14-yard run by Travis Phillips to go up 43-14 with 4:08 to play.

Though Chaffee marched 72 yards down the field to score on a 1-yard quarterback keeper by Jordan Yahn with 2:05 to play, the Red Devils were unable to convert on an onside kick, allowing the Rams to run out the clock.

"We made too many mistakes," Chaffee coach Charlie Vickery said. "We had mistakes that we haven't been making in the first four ball games. You can't have the turnovers that we had and allow them to get in to good field position like they did."

Unfortunately for Red Devils fans, Chaffee was forced to play catch-up from the first quarter on as Scott City went up 7-0 on their opening drive on a 5-yard pass from Jonathan McFall to Austin Atchley.

The Red Devils answered on their opening drive on a 2-yard run from Tyson Estes, but with a missed kick on their extra-point were left trailing 7-6.

On Scott City's next possession, the Rams caught a break when McFall connected with Atchley again, this time for a 37-yard score.

"We got lucky on one," May said. "Jon made a great move with pressure to get loose and then he threw the ball up and Atchley made a great play on it.

"That was actually suppose to be a pass out in the flat, but we got pressure that caused everything to fall apart and then Jon made something happen."

A 1-yard run by Phillips with 1:34 before the half gave the Rams a 21-6 lead going into the locker room.

It was after a scoreless third that Chaffee finally looked to have turned the tide when they stopped the Rams on 4th and 2 from the Red Devils 3-yard line, recovering a fumble in the end zone. After a false start penalty left Chaffee starting their drive on the 15-yard line, the Red Devils closed to within seven points of the Rams on a five-yard run by Estes, followed by a two-point conversion run by Yahn.