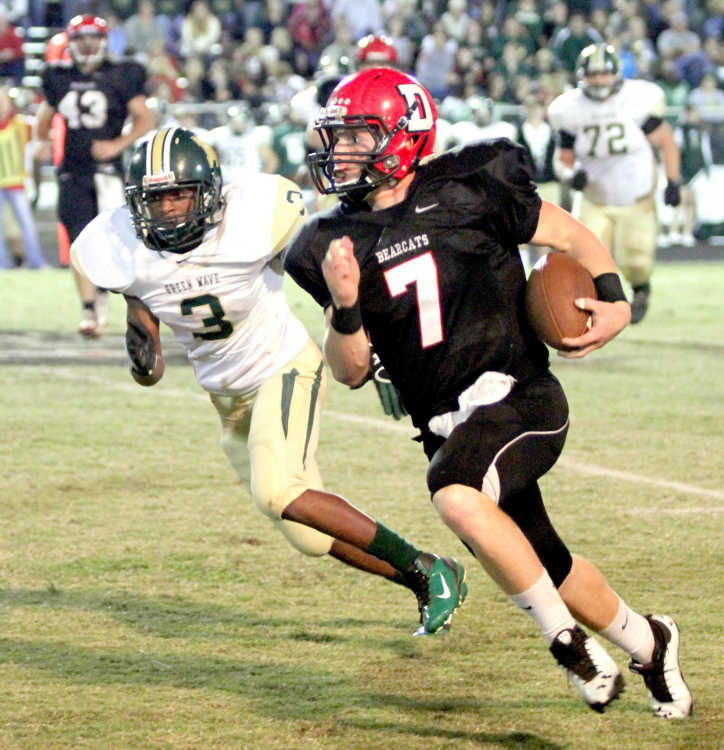 Dexter quarterback Cody Stevens breaks free for a 48-yard run in the third quarter against Malden as the Green Wave's Malik Perkins (3) pursues on Friday night in Dexter (Photo by David Jenkins, Staff)

He also couldn't help thinking he played a major part in their 26-20 overtime loss.

On the first play in overtime of last year's game, Stevens lost a fumble on a 7-yard run. Malden then scored the game-winning touchdown in the very next series.

With that in the back of his mind, Stevens made sure he didn't feel that way again.

Stevens led the Bearcats to a 40-26 win against Malden on Friday at Charles Bland Stadium in Dexter.

"They beat us in overtime and I fumbled in overtime. I had to redeem myself this year," Stevens said. "I think the team did, anyways. The whole team did this year."

Stevens took advantage of stellar offensive line play to rush for 175 yards and one touchdown. He also threw for two scores on 4 of 10 passing and 76 yards.

"He's a very good runner as well as a passer," Dexter coach Aaron Pixley said about Stevens. "We went with what Malden was giving us and we decided to run him more and he did an excellent job. He's just a very good running quarterback."

After struggling with fumbles and battling Malden's scheme of protecting the passing game with multiple defensive backs in the first half, Dexter returned from the locker room with a new game plan -- running.

"It was pretty obvious they were trying to take our passing game away," Pixley said. "They did a good job of it. They got some pressure on us early in the game. They were playing bracket coverage over the top of Tyler Miller and they just did a good job."

Stevens, as well as Josh Overall, who finished with 89 yards on 15 carries, began running off-tackle, reacting perfectly on read option plays and marching right down the middle of the field.

"The running game worked really good," said Stevens. "At first we wanted to try and pass but they had like six DB's. So, we came out running the ball down the middle and they couldn't stop it. The lineman were blocking better. We just ran it down their throats."

Although Malden tied the game at 12-12 early in the third quarter, Dexter pounded out two drives with success stemming mostly from the run.

Overall went right up the gut for a 5-yard touchdown run with 9:01 left in the third and then again with 5:19 left from 19 yards out.

"I would say the key was their O-line," Malden coach Joel Wyatt said. "They kind of wore our D-line down. Not just Stevens running the ball, but Overall and (Nick) Summers were just pounding the ball off-tackle. Their O-line just took over in the middle of the third to the end of the game."

The Green Wave cut Dexter's lead to seven just over a minute later when Romello McCoy ran for his third touchdown of the night -- a 29-yard scamper.

Pixley was especially proud of the way his team answered right back.

"You have to," Pixley said. "When adversity hits, you stay together and keep playing hard because good things will happen again."

Stevens made sure their were good things to come.

He put the game out of reach in the middle of the fourth quarter when he punched it in from 1-yard out and connected with Miller for a 53-yard scoring toss giving his team a 40-19 advantage.

"He's as good as advertised. He's tough," Wyatt said about Stevens. "I thought we really did a nice job in the secondary defending their rollouts. They really didn't hurt us in the passing game.

"The second half, Stevens just got a feel for it on the counters and the quarterback iso's. He's a player and we knew that."

"I felt like our running game, all in all, our fullback (Alex) Cliff ran the ball extremely well, Overall and Nick Summers ran very well," Pixley said. "We just have to hold on to the football in the running game and hopefully we can get that corrected."

Two fumbles by Dexter in the first quarter slowed their momentum.

After the Bearcats' first fumble, Malden used just three plays to get in the endzone when McCoy blasted through Dexter's defense for a 30-yard scoring run.

"Whenever they scored the first touchdown, I think our defense settled in really well," said Pixley. "We gave up a few big plays late in the game but, once we found our footing and settled down a little bit we played much, much better."

Malden was also hit by turnovers and penalties throughout the game. Their first lost fumble led to Dexter's first touchdown when Stevens hit Jake Lee from five yards out in the second quarter to tie the game at 6-6.

"The turnover bug got us," Malden coach Joel Wyatt said. "That led to their two scores in the first half. Those were just backbreakers.

"In a nutshell, penalties and turnovers really bit us."

Malden had two lost fumbles and nine penalties for 69 yards.

Summers ran the ball up the middle for a 4-yard touchdown with 1:35 left in the second quarter to give the Bearcats a 12-6 lead going into halftime.

Malden's third play out of the second half led to McCoy's second score of the game -- a 57-yard run to tie the contest at 12-12.