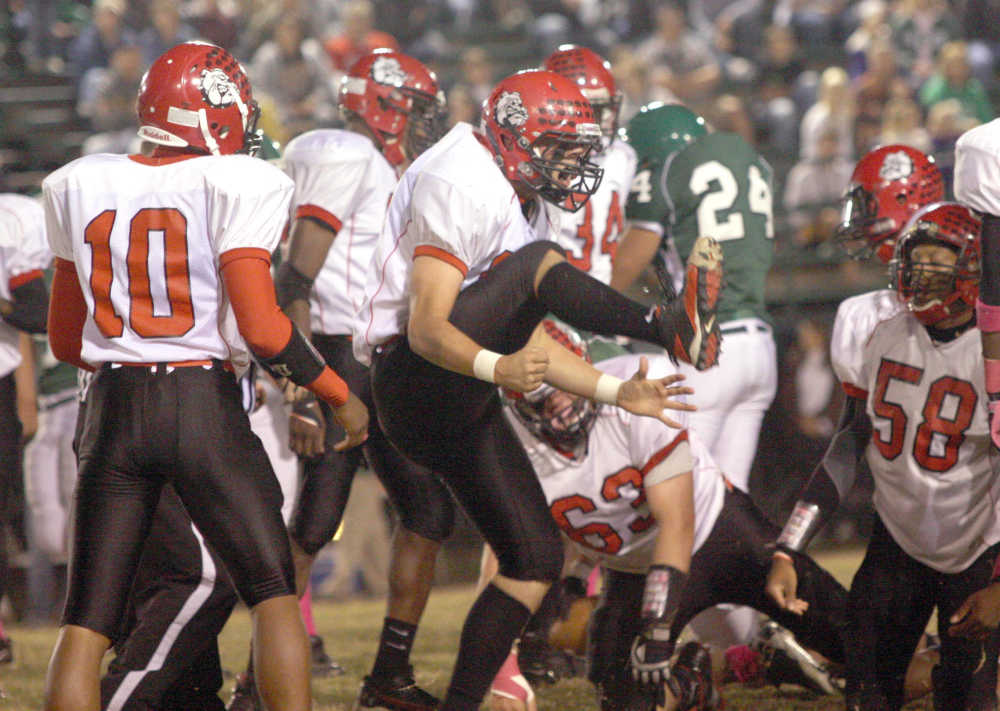 Sikeston's Blake Flannigan reacts after making a tackle against Perryville on Friday night in Perryville. Flannigan leads the Bulldogs in tackles. (Photo by Chris Pobst, Staff)

SIKESTON -- Although it has lessened of late, the recent rivalry built between Sikeston and Cape Central will again rear it's head.

On Friday, the tension between the two will rise, however, as they see themselves heading straight forward into a must-win situation.

It's the second week of districts and the Bulldogs are looking to go up 2-0 while Cape Central is looking to earn their first district win after falling to Farmington, 49-34.

"There's been a little rivalry there, built up over the last few years, and you put that into the mix as far as district playoff situation it's a have-to win," Sikeston coach Kent Gibbs said. "It's certainly a have-to win for them after getting beat by Farmington."

"They've got more speed this year," said Gibbs about Cape Central's running game. "They may not have as many running backs, but they have more speed. (Martin) runs really well and he got away a couple times against Farmington."

Although their bread is buttered on the ground, Tigers quarterback Christian Cavaness is who makes them go.

"He's their trigger man," Gibbs said about Cavaness. "He's certainly what makes them go. He does a good job of executing and not turning the ball over."

Cavaness, who has thrown for 613 yards and five touchdowns, is one of the best in the area at managing a game behind center. He's just as deadly with his arm than he is on the ground.

"He makes you play a more assignment-smart football and you have to assign someone to him," Gibbs added about Cavaness. "He's fast enough that, he may not run by everybody, but he's certainly going to run away from a lot of folks and does a good job of making moves in open space.

"Also, while he rolls out there, if your safety or cornerback roll up he's going to hit the receivers over the top."

Gibbs said Cape Central's speed is his biggest concern about the Tigers' offense which has the ability to get out into space on the outside and break big runs.

"Hopefully, we've got enough to slow them down on offense," he said. "They've been putting up some points and we're going to have to do a good job defensively, assignment-wise."

Cape Central has averaged 321 yards a game this year

Although they have been one of the top teams as far as yardage gained (3,090 total yards, 386.3 average), Sikeston slipped in a few new wrinkles in their first district game against Perryville a week ago.

The Bulldogs (7-1) showed new formations which led to a lot of different players getting touches from a spread formation and the "swinging gate" on extra point tries.

Although it may have been to throw off upcoming opponents such as Cape Central and Farmington, Gibbs said those new tactics may not have been a one week thing.

"We'll still do those things and add a little to that," said Gibbs. "We feel like it can help us. Is that spread look going to be the main part of our offense? No. But, we do think it gives us some looks and gets us out in space."

Sikeston receiver Keldon Warfield caught four passes for 78 yards and one touchdown in the new scheme. Although, not much offense was needed in their 58-0 pounding of a young, 1-7 squad in Perryville.

Despite their lopsided win last Friday, Gibbs is the first to know that wins against their next two opponents, Cape Central and Farmington, may not be as easily attainable.

"People have grown accustomed to Sikeston winning games and scoring 50-plus points," Gibbs said. "But, that's not going to happen in the playoffs. You see how other teams adjust and if different things don't help us, we won't use it."