2011 Softball Player of the Year: Alexis Spriggs of Scott City 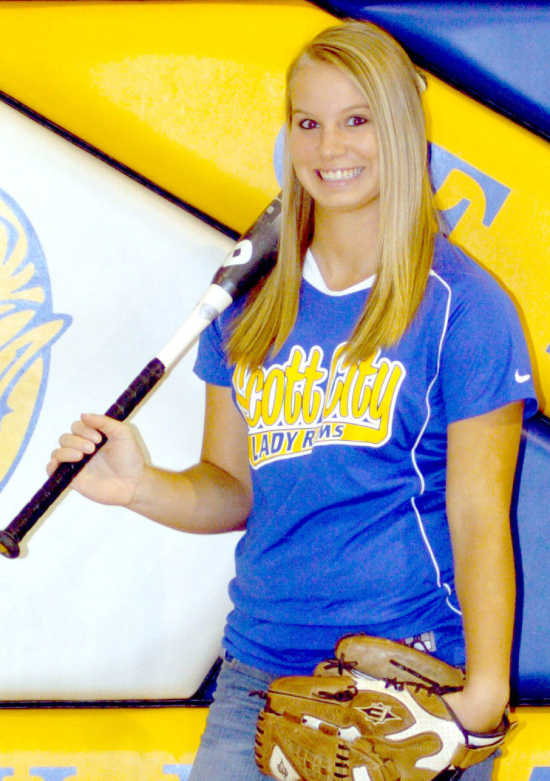 After an offseason spent fine-tuning her game, Scott City junior Alexis Spriggs spent most of the Lady Rams' season making her presence felt both at the plate and on the mound.

From driving in the game-winning run in Scott City's season opener to pitching the Lady Rams to within just a few outs of their first district championship, Spriggs provided stability to a Scott City's lineup that only featured two starting seniors.

"She's definitely one of the team leaders," Scott City head coach Amy Pobst said. "She's one of those players that leads by example for the most part. She's not going to be telling somebody they have to do something, she's going to go do it and they will follow.

"When the game is on the line she's definitely one of the players you would like to see up to bat."

It's following the best statistical season of her young career that Spriggs has been selected as the Standard Democrat Softball Player of the Year.

Alternating between batting third and cleanup in the Ram's lineup, Spriggs finished the fall season with a .347 batting average and .518 on-base-percentage.

Slugging .520, she drove in 28 runs while scoring another 28 with five doubles and triple. Hitting the first home run of her career in Scott City's second game of the year, she finished with two, including a grand slam that she called the highlight of her season.

As a pitcher, she recorded a 6-6 record with a 3.35 earned-run-average, striking out 59 batters in 71 innings pitched.

"She made a huge pitching transition from her freshman to her sophomore year and then a pretty good improvement from last year to this year also," said Pobst.

Her numbers numbers earned her spot on the Class 2, District 2 All-District team as a pitcher as well being named the Scott-Mississippi Conference Player of the Year.

While many players pack up for the winter as soon as the high school season draws to a close, Spriggs spends her time getting in extra at-bats playing in traveling and all-star teams.

"I don't have an offseason," said Spriggs said. "I'm in tournaments right now and then I play basketball. After that it just starts right back up. As team we'll hit the weight room and do still batting stuff and get the cage out and hit outside."

In her work between seasons, especially with a hitting and a pitching instructor, that Pobst said has made a big difference in her improvement over the past few years.

"She worked in the offseason real well and got a little bit stronger and worked on her pitches," Pobst said. "She added a few pitches and improved on them. She has a screw ball, her rise is working a lot better and her drop curve is coming along now.

"Hitting wise she really worked on her power swing and adjusted her swing in the offseason and is hitting for more power than she was last year I think. She's already starting offseason tomorrow already in the last couple of weeks. She's definitely dedicated year round working on it. She's working and always trying to find ways to improve."

Though pleased with her own performance, Spriggs credits the growth of the team and an improved defense in making things easier on the mound.

"My defense helped me out a lot this year," she said. "I felt like the team improved this year as a whole and being a pitcher you need good defense and they were really good this year. Even when we had injuries, everyone stepped up and did their job."

If there's goal she has heading into her senior season, its finishing one game better and clinching that elusive district title.

Last season, Spriggs allowed one run through six innings in the title game, until a two-run error by the Lady Rams in the seventh allowed St. Pius to comeback a for a 4-3 win.

"Being my last year it's the last chance to make history and win districts," she said. "We did well, but I really wished we had gone farther in the playoffs because felt like this was the year to do it," she said. "Because last year we only lost two seniors and this year we have three. We had one who couldn't play, but she was still apart of the team. And then the seniors that we did have were a big part of the team."