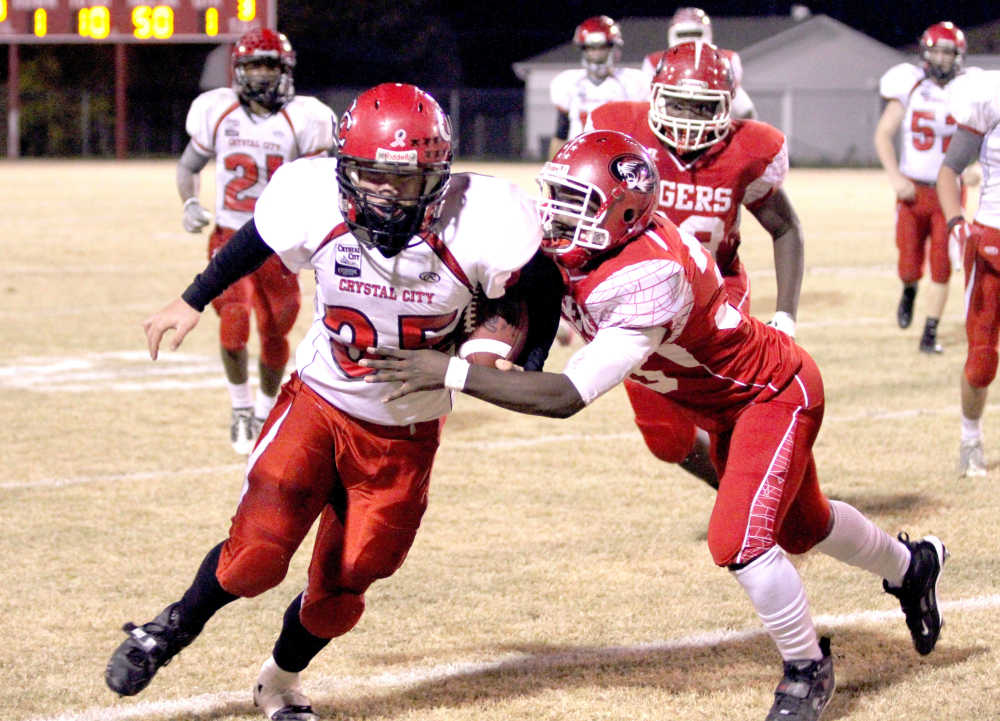 CARUTHERSVILLE -- Not many teams in the Southeast Missouri area pack the explosive one-two punch that the Caruthersville Tigers have in running backs Elbie Fonda and Darrell Monroe.

Anyone watching the Tiger's game against Crystal City on Monday got to see both players impose their will on the Hornet's defense and add to their already impressive stats in a 55-20 win that sends Caruthersville to the quarterfinals.

On Monday, Monroe led the Tigers with 212 yards and three touchdowns on 12 carries while Fonda scored four times, collecting 197 yards on 16 carries.

"Elbie, I give him a lot of respect," said Crystal City coach Kenny Weik. "He's a size we can handle, but Monroe is a man. It's tough to stop that when he's that fast and when he gets moving it's hard to ask a kid to get in front of him."

Together, the two backs have combined for over 3,000 rushing yards and 55 rushing touchdowns this season as the Tigers push deeper into the Class 2 playoffs.

"We've been blessed to have those two guys on the team," Caruthersville's head coach Nathan Morgan said. "I don't know if I can say enough about either of them. They're high character guys that are willing to go to battle for each other and share the load to make us a better team. We don't have to have just one guy out there doing everything."

Heading into Monday's sectional match up against Crystal City, Fonda, a 5-9, 180 pound senior, had amassed 2,235 yards on 178 carries while scoring 31 touchdowns. He's averaging just over 186 yards-per-game and 12.6 yards-per-carry.

"I think Elbie is better than me because he has more experience," Monroe said. "But, when Elbie gets tired, I go in and when I get tired Elbie goes in, so it's like flip flop, flip flop. Put us together and we are better than anybody in the state."

Though both backs have had plenty of success this season, they both have their own unique style of running that allows Caruthersville to mix things up.

"It's definitely a typical case of thunder and lightning," Morgan said. "They both have, I would say, equal speed. Elbie has the quick cuts on a dime, can start and stop whenever he wants to.

"Darrell will put his hand on you, put a defender on the ground and break it. It's just different styles. One's a little more hard nosed than the other, but both get it done."

Morgan credits the strong play of the team's offensive line so far this season with helping cater to both backs style of play.

"One of things that's been a lot different about us than in years past is we have been able to be more physical up front at the offensive line," he said. "So when we need to get side-to-side we can with Elbie and when we need to we can get downhill we can with Darrell. It keeps defenses honest. They have to game plan for both guys, which is tough to do."

Both Fonda and Monroe have also been involved in the passing game with Fonda catching 24 passes for 177 yards and a touchdown. Monroe has caught six passes for 142 yards and four scores.

While Morgan says it's a nice option to move Fonda and Monroe outside every once in a while, there's no need to mess with what has been highly successful for the Tigers.

"We've utilized our backs a little bit more in the passing game than we have in the past to hopefully open things up on the edge," he said. "It does and we take the edge when we need to with the passing game, but when you break run like we do, there's no need to force it."