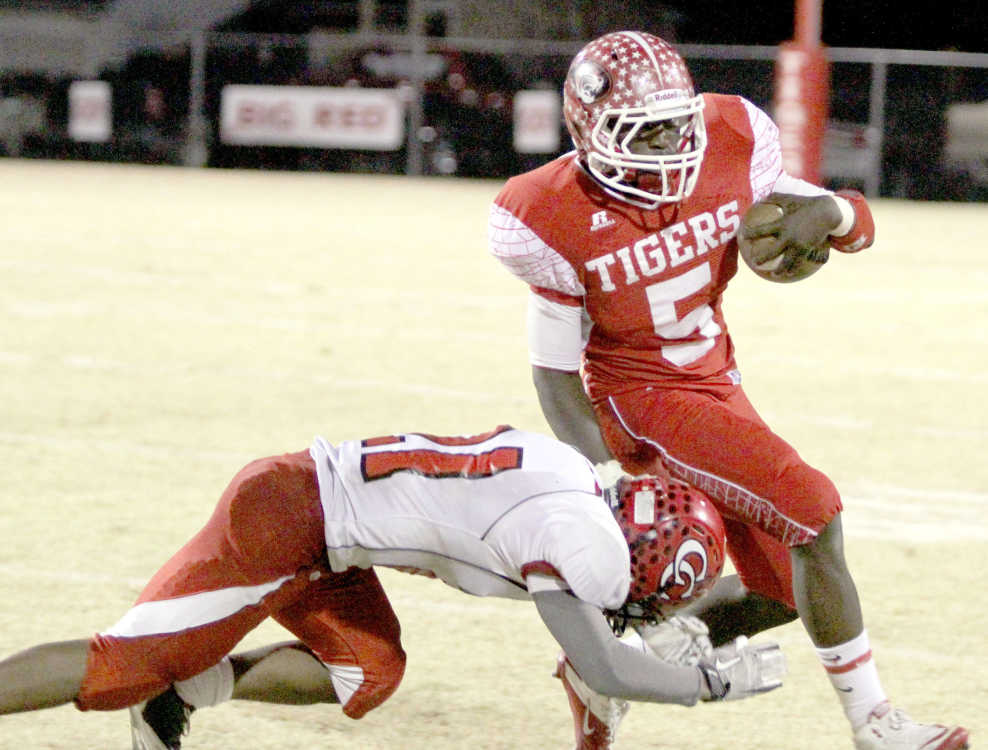 Caruthersville grounds out win over Hornets

CARUTHERSVILLE -- It didn't phase Caruthersville in the least that Crystal City opened Friday night's Sectional contest with a 14-0 lead.

Besides, it happened once before during Week 3.

"Don't quit," Caruthersville running back Elbie Fonda simply said he was thinking early in the first quarter. "Just keep playing and have no let-ups."

The Tigers (11-1) did just that as they rattled off 28 unanswered points to close out the first half led by astounding running efforts from Fonda and Darrell Monroe to evict the Hornets from the playoffs and continue their quest for The Dome in a 55-20 win at Hopke Field.

"We gave them the momentum early," Caruthersville coach Nathan Morgan said. "But, at the end of the day, we started doing what we do and got downhill and let things take care of themselves."

Although Crystal City running back Michael Bohnert and quarterback Nic Rothweiler put the Hornets up by two touchdowns after a 2-yard run and a 58-yard quarterback option, Caruthersville stayed poised and waited for their two stars to make something happen.

The 6-2, 220 pound sophomore rumbled right up the gut for a 20-yard touchdown run with 48 seconds left in the first quarter.

"He ran with a little bit of attitude on that one," Morgan said. "He had got his butt chewed because of some defensive plays before so, he wanted to make amends."

Fonda, a 5-9, 180 pound senior flew by the Crystal City defense for an 81-yard score within the first two minutes of the second. The senior added a 6-yard run and a 21-yard gash to end the half with the Tigers up 28-14.

"We know," Crystal City coach Kenny Weik said. "When you have two backs like (Fonda and Monroe), they're hard to stop. They're just hard to contain. This was the second time this year we've seen them and it was the same result.

"They're going to pop big ones on you and they did. They're game changers."

Monroe led the Tigers with 212 yards on 12 carries. Fonda added a hefty 197 yards on 16 touches while crossing the goal line four times.

The Hornets, who finish their season with an 8-4 record, added their last score during Caruthersville's first offensive series of the second half.

It took less than a minute, however, for Caruthersville to gain that score back.

With 5:25 left in the third, Monroe busted through numerous tackles, drug defenders with him and tiptoed the sideline for a 52-yard touchdown score to give the Tigers a 35-20 lead.

"We got up on them early and we were happy with what we did," Weik said. "You play these guys on their turf, you can't make mistakes. You've got to keep getting up on them and they just don't get down. They just keep coming at you."

A fumble recovery in the endzone by Caruthersville offensive lineman John Cole extended the advantage by the Tigers, 42-20 with 3:16 left to play in the third.

Like they have so many times before, Fonda and Monroe put the game out of reach in the fourth quarter.

Fonda broke loose for an 18-yard touchdown while Monroe, again, kept on his feet after swatting tacklers and defying the sideline for a 55-yard scoring run.

The Fonda-Monroe tandem once again struck.

"They take care of each other," Morgan said about his two running back. "They want to block for each other and it's just a healthy competition between the two. It's a blessing because their attitudes are always so great. They know it's team first out there."

As a team, Caruthersville ran for 480 yards. Tigers quarterback Tyler Grissom passed for an additional 51 yards on seven completions.

Following this resounding 35-point win, Caruthersville is now faced with the same team that ousted them from playoff contention last season -- Maplewood Richmond-Heights -- who defeated Brentwood 7-0 on a 80-yard fumble return by Kahlid Hagens with 3:15 left in the fourth quarter on Monday as well.

Unlike the last couple of years, Maplewood has had Caruthersville's number. That's something Fonda and Co. would like to change.

"We have to play fundamental ball," Fonda said. "No mistakes."