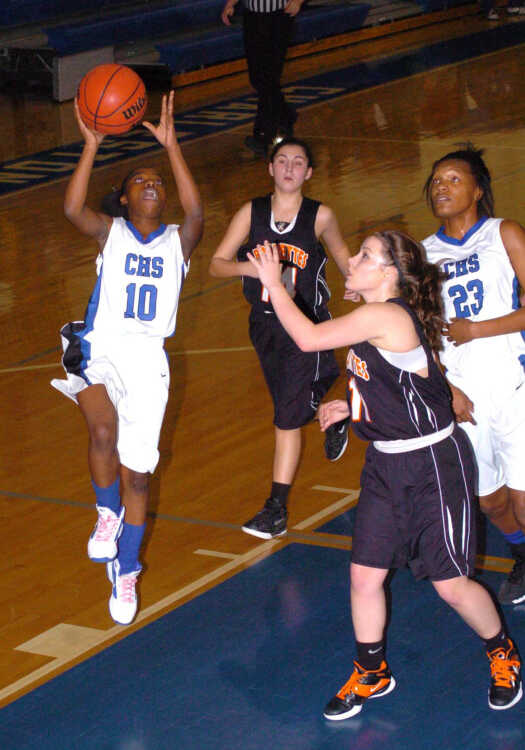 Charleston's Sierra Frazier (10) gets past Scott Central's defense on her way to a layup on Monday. (Photo by Brent Shipman, Staff)

CHARLESTON -- Led by a pair of 21-point scorers in E'Neikqua Ewing and Kasuela Cooper, the Charleston Lady Bluejays rolled to a 25-point halftime lead on Monday before defeating Scott County Central 81-65.

"We turn the ball over a lot," Charleston coach Josh Thompson said. "But, I look at it all the time and most games we have more steals than turnovers.

"We pride ourselves on being quick on the ball. We need to value the ball on our end more, but as long we create a lot of turnovers as well we'll be alright."

Fueled by Cooper's 11 point first quarter, the Lady Bluejays scored 13 unanswered points to end the opening frame up 19-4 after a 6-4 start.

After the Lady Bluejays (11-8) had pushed ahead by 21 points, at 30-9, the Bravettes' (4-8) offense finally found some footing as a basket from Mikaela Blissett kicked off a 5-0 Scott Central run.

With Charleston back up 35-18 with 1:28 to go before the break, however, the Lady Bluejays closed out the half scoring eight-straight points to take a 43-18 advantage into the locker room.

"We didn't come out really ready to play in the first quarter," Thompson said. "I think we got up 19-4 at one point and then really turned it on.

"That's how we have to play the whole time. We can't play in spurts to beat a good team."

Opening the third quarter with back-to-back baskets from Blissett, the Bravettes attempted to chip away at their deficit all through the third quarter, including a pair of 6-2 runs that closed Scott Central to within 56-38 to start the fourth.

With her 3-pointer to start the final frame, Dazique Gillespie was able to kick start a 11-2 Charleston rally in the first 2:12 of the quarter that forced a Scott Central timeout and essentially sealed the game at 67-40.

Down by 27, but quickly running out of time, Scott Central regrouped and continued to cut into its deficit until the final buzzer.

Coming out of the timeout with an 11-2 rally, Scott Central was able to close back to within 16 at the 81-65 final when sophomore Johniqua Fort scored seven points in the last 21 seconds of the game.

"They're a better team than we are," Bravettes' coach Semona Penrod said. "They're suppose to be anyway. So I think we came out and played a little scared, shaky and threw the ball away a lot. There's just a lot of things we have to work on."

With a roster consisting entirely of freshman and sophomores, Scott Central was led by Fort, who scored a game-high 33 points, including 24 in the second half. Blissett was second on the team with 18 points while going 6 for 8 from the free throw line.

"We're battling with a couple of injuries," said Penrod. "When you only have seven players, that doesn't help much. Then we had another one or two have to come out with injuries (during the game).

"So I thought that they worked hard, they just have a long way to go. This is one of those nights they couldn't hang on to the ball."

For the Lady Bluejays, Cooper's 21 points came while shooting 10 of 17 from the floor while collecting 20 rebounds and three steals. Shooting 9 of 16, Ewing also had 21 points to go along with 10 rebounds, six steals and three blocks.

Sierra Frazier has 15 points, four assists and six steals with Juwanna Walker adding eight points and 13 rebounds to Charleston's cause.

"They'd cut our lead a little bit in the second half," Thompson said of Scott Central. "But I was trying to work some younger kids in there not being able to play a jayvee game tonight.

"I'd like to see a little bit more out of them. When we mix the jayvee kids in we can't let the other team cut into our lead, but they're getting better."