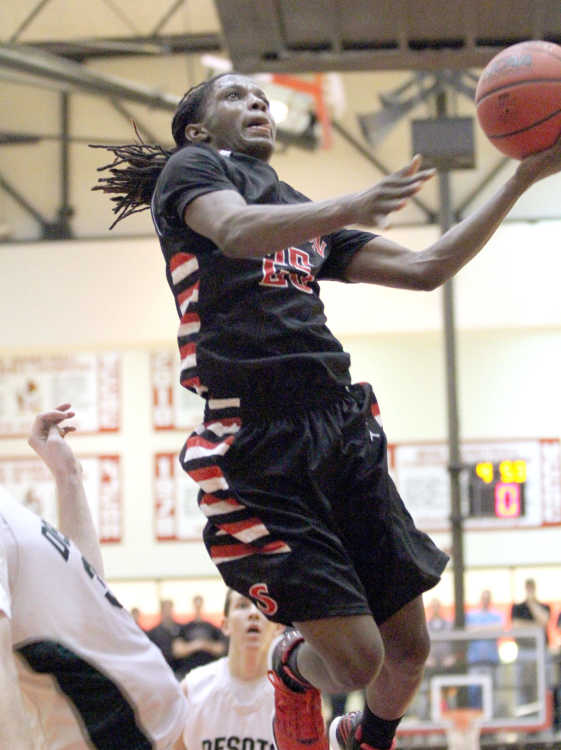 Sikeston's Terry Jamison goes up for a shot against DeSoto in a Class 4 sectional game on Wednesday at Mineral Area College in Park Hills. (Photo by David Jenkins, Staff)

PARK HILLS -- DeSoto's height was no match for Sikeston's relentlessness.

On Wednesday night, not even the likes of Southeast Missouri State University recruits Colin Ferguson and Jared White could slow down the merciless attack of Sikeston who defeated the Dragons 71-59 in the Class 4, Sectional at Mineral Area College in Park Hills.

"We just put relentless pressure on them at all times," Sikeston junior Vashawn Ruffin said. "They had a great guard and the big guys in the post. The main word is just 'relentless.'

Where does that extra aggression stem from?

Every since Feb. 10, when the Bulldogs lost an upsetting 2-point game to Cape Central, Sikeston has looked re-energized and focused on one goal -- go as hard as they can for 32 minutes.

"That Cape Central game woke us up," Ruffin said. "That let us know that we can be beat, so every day in practice we just come out and work as hard as we can at everything we do."

That intensity has grown game after game.

"These guys have worked really hard the whole season," Sikeston head coach Gregg Holifield said. "After losing the guys that we lost from last year and for us to be in this position, I'm very proud of them. A lot of people didn't give them much of a chance to be where they are now. I'm just very pleased with their work ethic and effort."

After playing the Bulldogs to a close 3-point loss on Jan. 9, DeSoto looked to even the score and possibly end their season.

The defending Class 4 state champions wouldn't have it.

The Bulldogs (23-4) marched out to a 12-2 lead with help from Vashawn Ruffin's two 3-pointers and a defense that forced six DeSoto turnovers in the first three minutes.

"We just had to play harder than we did the first time we played them," Jamison said about the difference in playing them a second time. "Their court was smaller than this court and it made them look bigger, so it was easy for them to lob the ball and get it to the bigs. We stopped that a little better tonight. We went after them and was aggressive."

With Sikeston's pressure-packed defense hounding the Dragons' every move, the pace was entirely to the Bulldogs' liking. Their press caused DeSoto's guards fits while trying to move the ball upcourt leading to errand passes and steals which Sikeston took advantage of.

"Our kids really did a good job of position pressuring, creating turnovers and I thought we had good pressure up top which is what we have to do," Holifield said. "We're badly outsized and those kids can play and they present many problems. I was pleased to see we could dictate and do what we do."

The Dragons were unable to utilize the 6-10 Ferguson or Jake Patzner, who stands at 6-9, the way they wanted to. DeSoto was forced into 10 turnovers in the first quarter and 20 total.

"They would try and throw it over us," Ruffin said. "We just tried to keep their bigs out of the paint.

Sikeston led 17-10 after the first quarter was played, but outscored DeSoto 21-15 in the second. During the last two minutes of the first half, the Bulldogs went on an 11-2 run. Sikeston went into halftime with a 38-25 lead following a 3-pointer by Markeith Bratcher, who finished with seven points.

"The kids get nervous and Sikeston goes on runs," DeSoto head coach Allen Davis said. "That's how they beat you. I thought our halfcourt defense was really good, but you can't make mistakes in the fullcourt and give them layups. I'm going to say they had quite a few layups and you have to be able to handle that. They do it awful darn good."

Although they enjoyed a 13-point lead at the half, Sikeston shot just 5 of 16 from behind the arc. They were 2 of 9 from 3-point in the first quarter alone settling for long jumpers with Ferguson and Patzner patrolling the lane.

"They stay in the paint and they negate your post game with their size," Holifield said. "Our guys battled hard to get position. We had some open looks and we were fortunate enough to knock some of them down."

Defending the towers from DeSoto took a swarming effort from the likes of Keldon Warfield, JT Jones and Kil'ron Coleman, as well as others. They held Ferguson, one of DeSoto's leading scorers, to seven points in the first half.

"We had to put as much pressure as we could on them and take away their high-low post," said Holifield. "They do a great job high-lowing with (Ferguson) and (Patzner). We really focused to take that away and make every pass difficult. I thought we set the tone for that in the first half."

Both teams struggled from the floor in the third quarter as Sikeston shot 26 percent (5 of 19) and DeSoto was 3 of 12 (25 percent). Despite their woes, the Bulldogs opened the third with a 9-3 run thanks in large part to Jamison's five third quarter points.

The Dragons missed their first six shots in the third frame and didn't knock down their first field goal until the 2:15 mark when Ferguson finally ended the drought.

Although Sikeston's lead would balloon to as much as 19 points in the third quarter, the Dragons kept things relatively close.

DeSoto, however, could not bust through in the fourth, although they managed to keep the game around 10 points for most of the way. Jarred Sapper hit 1 of 2 free throws with 2:28 showing on the clock to cut Sikeston lead to eight, 60-52, but a basket by Ruffin, another from Jones and then one free throw from Ruffin sealed it with less than a minute to go.

"I didn't feel relaxed until the last 10 seconds of the game because they have so much firepower," Holifield said. "They just play, their huge and I'm just so proud of our team's effort against them."

Ferguson and White did as much as they could to keep DeSoto in the game.

"We had some weaknesses no doubt about it," Davis said. "We've got one guy that can handle the ball pretty good. Not saying that (White) can't do it, it's just hard for one guy to do it for 32 minutes."

With DeSoto having a clear advantage when it came to height, the Bulldogs stood their ground and then some. Sikeston slightly held the rebounding edge 30-29.

"What you do in practice, shows in the game," Jamison said. "We went hard at every aspect tonight."

Jones added 12 points for Sikeston while Warfield chipped in nine.

Sikeston will once again play Imagine College Prep on Saturday during the Quarterfinal round at the Farmington Civic Center in Farmington at 7:45 p.m.

The Bulldogs have already handed Imagine a 69-62 loss during the Tiger Shootout at Cape Central High School earlier this season. They also defeated the Bears during their run to a state title last season, 82-44.