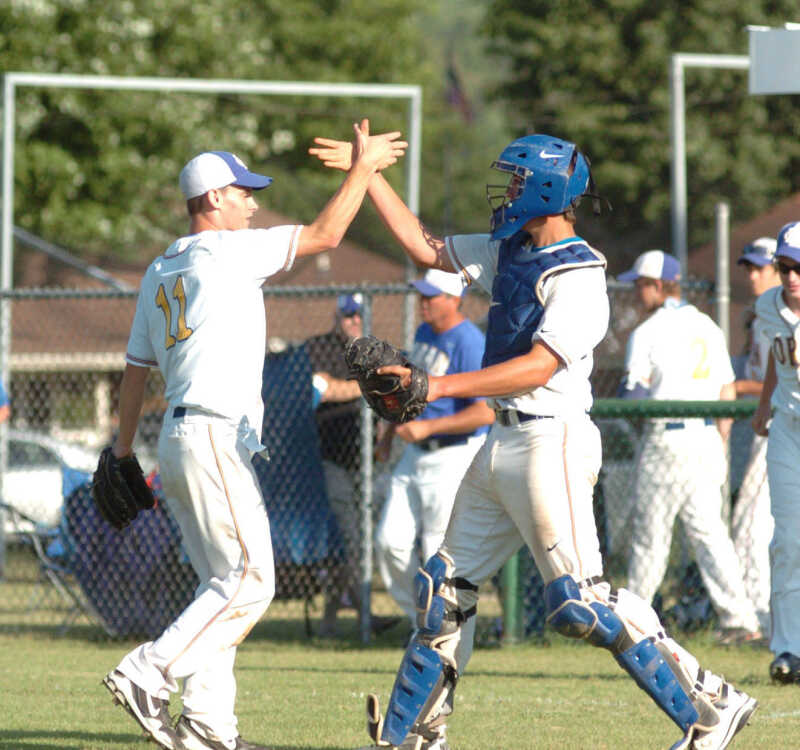 Oran pitcher Kody Moore and catcher Alex Heuring celebrate after their 6-3 win over Cooter in Class 1 sectionals on Monday in Oran. (Photo by Brent Shipman, Staff)

ORAN -- Looking for a return trip to the MSHSAA Show-Me Showdown, the Oran Eagles found themselves one step closer on Monday after facing Cooter in a rematch of last year's Class 1 sectional matchup.

In what was the fifth postseason meeting between the two schools in the last seven years Oran got a combined one-hit effort from pitchers Dalton Elfrink and Kody Moore as the Eagles pulled out an early lead and held on for a 6-3 win.

"It's always a good game with Cooter," Moore said. "Last year it was awful suspenseful because we went down there and then had to comeback again the next day (due to a rain delay).

"We beat a good ball club today and played a really good game."

With Elfrink starting on the mound, Oran held the Wildcats hitless through three innings while jumping out to a 4-0 advantage. Alex Heuring and Blake Carlyle both reached before scoring in the first inning with RBI hits from Chance Tenkhoff and Moore doing the damage in the second.

Though Elfrink had yet to surrender a hit early the third, a pair of leadoff walks came back to haunt the senior following a bunt by Brandon Bridges. Getting it down clean, Bridges was able to reach safely on an errant throw to first that also allowed the Wildcats to plate their first run of the contest.

A sacrifice fly and single by Tyler Thorton pushed Cooter back into the game at 4-3.

Still clinging to their one-run lead as they entered the bottom of the fifth, Oran's offense got new life after two scoreless innings when Moore, leading off the frame, drew a full count before driving a solo home run over the left field fence.

"I had two strikes and that was all I was thinking," Moore said of his shot. "Basically when I get a 3-2 count I'm aggressive so I was just looking to hit the ball and (their pitcher) threw a curveball and hung it. I just tried to hit it and hit it good."

Later in the frame Dalton Elfrink made Cooter pay for a two-out walk to Blake Carlyle with a drive down the right field line to push across the game's final run.

Moore came to the mound with one out in the fourth frame and proceeded to pitch 3 2/3 no-hit innings to ensure the Eagles another trip to the Class 1 quarterfinals.

After getting out of a bases loaded jam in the fourth, Moore faced just one batter over the minimum in the next two innings.

With Cooter down to its last three outs and his team holding a 6-3 advantage Moore struck out the side in the seventh to seal the win.

Outhitting the Wildcats 9-1 Oran was led by Elfrink, who was 3 for 3 on the day with three singles. Going 2 for 2 Moore drove in a pair of runs and scored once while reaching base in all four plate appearances.

Bear Hicks had two hits on the contest while Carlyle doubled and scored twice.

"I though Oran had their game on," Cooter head coach Allen Crawford said. "We didn't make three or four plays early and gave them some runs. From that point on they got some momentum and it was just hard to turn it around.

"Once we got three runs we kind of got back in it, but they sucked it up and came right back at us."

Adding to his hot night at the plate Moore picked up the win, allowing three walks without surrendering a hit in his 3 2/3 innings of work. He also struck out five.

Elfrink, who started the game, went 3 1/3 innings giving up all three runs on one hits and five walks.

With the win Oran keeps their winning streak intact as they've beaten Cooter each of the past five times they've met in sectionals. Moore also picked up the win in last season's meeting. He pitched the final 4 1/3 innings of a 5-2 contest that was played over two days due to a rain delay.

Oran (18-8) moves on to play Naylor (11-7), who defeated Oak Ridge 11-5 in its sectional contest. Naylor will host the quarterfinal matchup on Wednesday at 4 p.m.

It will be the second year in a row the two teams have met in the quarterfinals. Oran out-slugged Naylor 14-13 last season to advance to the Show-Me Showdown for the first time since 2008.