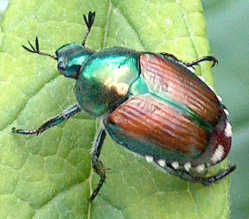 SIKESTON -- Japanese beetles arrived in the area about two weeks early this year, but the good news is they may not cause the damage growers are used to seeing each summer.

"There are some specialists who are saying as dry as we are, there is a good chance the numbers will be down," said Donna Aufdenberg, horticulture specialist for the Southeast Region of the University of Missouri Extension.

Japanese beetles are visible in the area but so far, experts haven't seen the numbers of beetles they've seen in the past, Aufdenberg said.

"Since we are so dry, even the eggs they lay may not survive," Aufdenberg said. "In a way, this dry period may have a positive effect and decreases the Japanese beetles."

The metallic-green beetles have bronze-colored wing covers. Just beneath the wing covers are six tufts of white hair along each side of their abdomen.

"They'll eat the petals of the flowers as well as the leaves," Aufdenberg said.

Japanese beetles can smell food up to three and four miles away, Aufdenberg said. Their favorite plants to feed on tend to be roses, crape myrtles and anything with fruit -- apples, peaches, blackberries, grapes, she said.

"When they feed, they send off a hormone -- an aggregate hormone -- to the other beetles and say: 'Come eat. I've found something good,'" Aufdenberg said.

The beetles start out as grubs under the ground and come out as beetles. They mate and go back into the ground to lay their eggs and then they die.

For more pictures and stories from the Standard Democrat, click here to log on to the electronic edition.