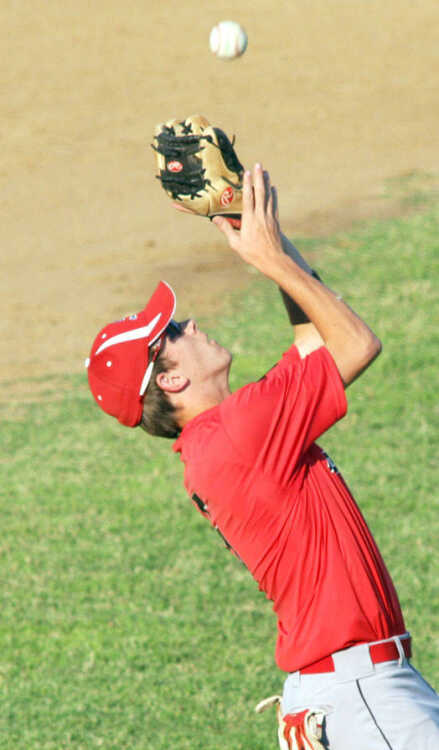 In this file photo, Post 114's Cord Sheehy reigns in a pop fly June 20 against the Charleston Squirrels at VFW Memorial Stadium. Sheehy led Sikeston with two hits Sunday at Paragould, Ark., as Post 114 faltered in both games of their doubleheader 11-1 and 10-0. Chris Pobst, Staff

Both games were shortened because of the 10-run mercy rule.

Louis Matos took the loss for Sikeston while Patrick Smith was the losing pitcher in the second game after 2 1/3 innings on the hill.

Sikeston, who will host Jackson Legion today at 6 p.m. at the VFW Memorial Stadium, gained the early advantage in the top of the first inning.

After back to back singles by Cord Sheehy and Austin Hatchel, Jayshawn McDaniel knocked Sheehy in with an RBI double to score Sikeston's only run of the day.

Nathan Maynard also added a single to round out Sikeston's five total hits during the 11-1 loss.

"We had three hits in the first inning and then we went silent," Sikeston head coach Alan Scheeter said. "That's been the story of our year in seems like. We can't put a full game together."

Sikeston was limited to one hit in the second game, which was attained by Maynard.