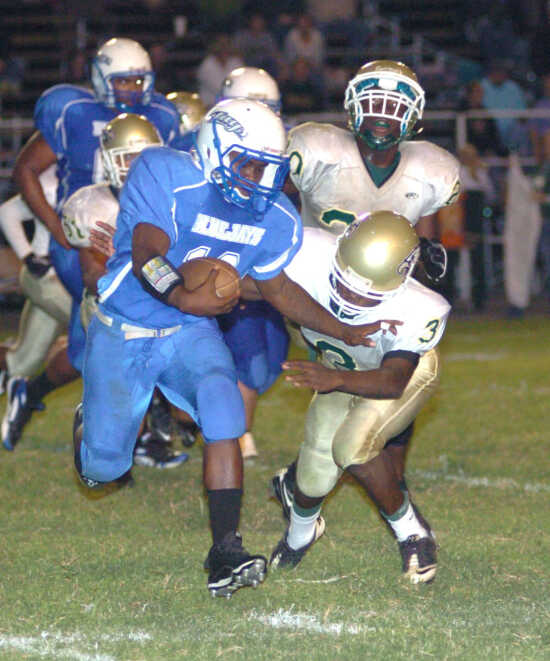 CHARLESTON -- Trailing by four points to start the fourth quarter on Friday, the Charleston Bluejays marched 82 yards down the field for the game-winning touchdown in a 14-10 win over New Madrid County Central.

"Our kids' character came shining through there when they had that gut check at halftime and they rose up and took the game," Charleston head coach Brett Blackman said. "Every one of us kind of drew up when we're carrying that ball (early on).

"They really tucked it away in the second half and controlled the ball. The kids were smart and the quarterback used the play clock and did good things."

Charleston's game-defining drive came after forcing the Eagles to punt on their previous drive. Taking over on their own 18-yard line, the Bluejays proceeded to quickly march down the field before setting up shop on NMCC's 13-yard line.

On the next play, junior Robert Bogan took the ball up the left side and into the end zone to put Charleston back on top 12-10.

Instead of kicking the point-after, Charleston elected for the 2-point conversion, which turned out to be pivotal in stopping a NMCC comeback. Taking the handoff once again, Bogan ran to the left side to give his team a four-point lead.

"That was big," Blackman said. "What sold it was the quarterback and the other back being able to make them think we're just going to run it right up the middle and then we just tossed it outside.

"That was a good sell by them and the offense playing it like we're running a dive and Robert ran right in to the end zone basically untouched."

Still with 9:06 to play, NMCC started its next drive on its own 36 and on the first play got a 50-yard run from quarterback Jashawn McDaniel that put them on the Bluejays' 14-yard line.

After a series of unsuccessful plays left them facing a 4th and six on the 11-yard line, the Eagles opted to go for it, rather than kick a field goal and still trail by a point with no timeouts remaining.

Going back to pass, McDaniel saw his shot into the end zone come up as an incomplete pass as Charleston took over on downs.

With NMCC unable to stop the clock and Charleston having no desire to take the ball off the ground, the Bluejays proceeded to drain over five minutes off the clock before being stopped on NMCC's 46-yard line with 1:23 to play.

Starting at their own 27-yard line and forced to go to the air, the Eagles converted for one first down before finding themselves facing 4th and 10 on their own 38-yard line with 34 seconds remaining.

Before McDaniel could get his pass off, Bluejay lineman Darrion Carter wrapped him up in the backfield. One final kneel down by Charleston sealed the game.

"It was an entertaining game," NMCC head coach Arlen Pixley said. "We came up on the short end of the stick because we stalled out on a couple of drives. You have to get points when you're down there with first and goal on the eight.

"There's two drives there, really critical drives in the ball game that we didn't finish on and defensively there late we just let up a little bit mentally."

The Eagles had taken an early lead with a 40-yard field goal from Adam Cooksey on their opening drive before Charleston answered on their first drive with a 8-yard touchdown run from Rontavious Clark to go ahead 6-3.

Putting NMCC back on top, McDaniel scored on an 8-yard quarterback keeper, with the point after giving the Eagles a 10-6 advantage with 1:01 to play in the first half.

Charleston nearly came back to take the lead going into the break, but a 23-yard touchdown run by Bogan as time expired was called back on a holding penalty.

With a chance to add to their lead midway through the third quarter, NMCC missed a 24-yard field goal that would have given them a 13-6 advantage.

Charleston out-gained NMCC 293 to 225 in total yards, including 280 of those coming on the ground on 39 carries.

"I felt we were there on a lot of plays where we just have to make that first tackle," Blackman said. "Those things will get better and I think our middle backers had a better game tonight than what they had the previous three games.

"I think they're on the way and we have some support out of the defensive line tonight, which is key."

Charleston moved to 2-2 on the season with the win while the Eagles fall to 1-3.