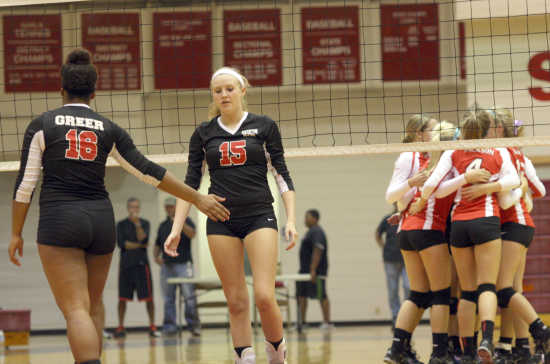 Sikeston's Trenice Greer (16) offers teammate Kalli Williams (15) a hand shake after the Jackson Lady Indian volleyball team scored a point and celebrates in the background Tuesday at the Sikeston Field House. Jackson won the match in two sets, 25-11 and 25-14. (Photo by Chris Pobst)

SIKESTON -- A bit of hope was restored by defeating the Bloomfield Lady Wildcats Monday. They made adjustments in their lineup and pulled out a three-set win.

But things took a major turn the following night for the Sikeston Lady Bulldogs volleyball team.

The Jackson Lady Indians swept through the Sikeston Field House and took a two-set win in dominating fashion Tuesday, 25-11 and 25-14.

"It was a complete let down after what happened last night," Sikeston head coach Steve Beydler said. "New rotation or not, my girls are able to handle that. The problem is that this team has no heart. Without heart, we're not going to be competitive and without heart, we shouldn't even be in the same gym as some teams.

"Tonight, it was just evident."

The match couldn't have started out any worse for Sikeston.

Jackson popped out to a 10-1 advantage in no time. After the score reached 12-3, Beydler called a timeout to try and rally his girls in the early going.

"Sikeston's always a good matchup for us because they always seem to have really athletic kids and very powerful hitters," Jackson head coach Julie Brandmeyer said.

Things looked to be on the upward swing to begin the second set, as Sikeston started with a 3-0 lead due to the serving efforts of Trenice Greer.

But, just as quickly, the set turned Jackson's way tying the game at 5-5 and then scoring the next seven points unanswered.

"We couldn't serve receive, we couldn't do anything," said Beydler. "I can't think of anything positive to say about tonight, other than, now it's over."

The Lady Indians built a 19-9 lead and the closest Sikeston came again was when they rallied for four points to make it 19-13. Jackson soon ended the match with a 6-1 run.

"Even our rally was something in itself a little disheartening to the team because they know they were doing a little bit better against some of their younger players. They began switching out their starters towards the end of the game.

"They had their way with us at every turrn. Anything they wanted to do, it went their way."

This was Jackson's eighth win of the season as they move to 8-9-2 on the year.

"Our gameplan was to speed up our offense," Brandmeyer said. "I think we had an opportunity to do that tonight and did pretty well. We have to keep doing that and keep improving."

"We need to prioritize what we need to work on the most before the Scott City game and we'll see what we can do there," Beydler said. "Tonight was a tough one. We knew that coming in. We just didn't step up."