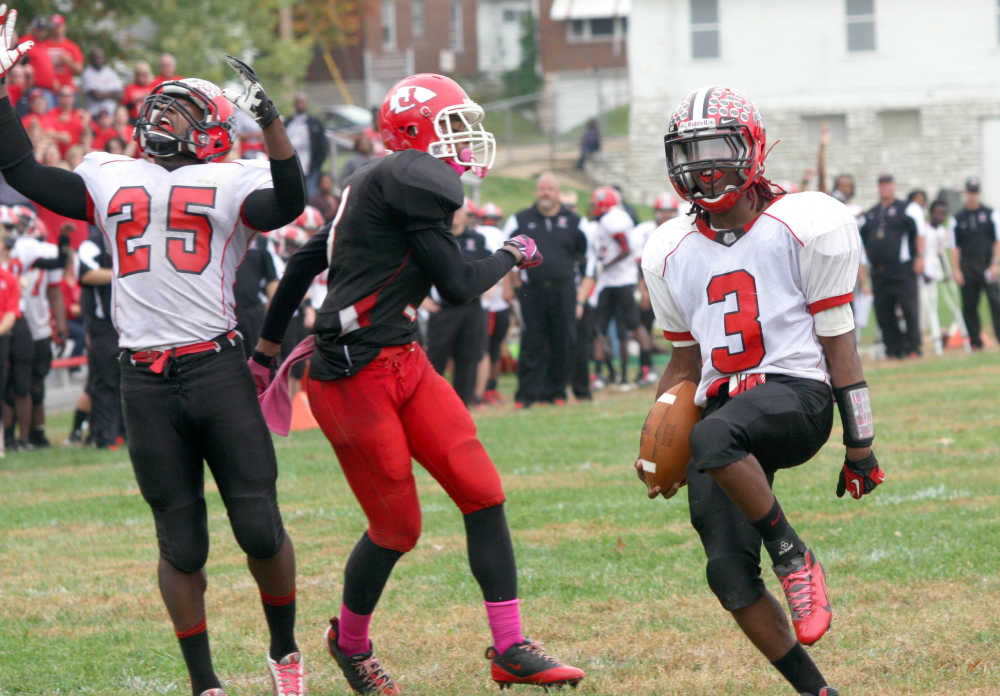 The Bulldogs overcame deficits to Jackson and Cape Central the previous two games and they were down 14-8 late in the third quarter on Saturday afternoon in St. Louis against Jennings.

The Bulldogs closed out the game with 25 straight points to escape with a 33-14 victory, improving the team to 8-0 on the season and strengthening the team's grip, if not clinching, the top seed in Class 4, District 1.

But it didn't came easy against a young Jennings team that had upset on its mind against the Bulldogs, ranked third in the state in Class 4.

Sikeston overcame the worst offensive quarter it has played the entire season when it turned the ball over three times and was flagged eight times for false starts or illegal motion in the first period alone.

The problem continued into the second quarter with a turnover on downs and a fourth turnover on its next two possessions.

"I think we had four turnovers and a punt the first five or six times we had the ball," Sikeston coach Kent Gibbs said. "Numerous penalties. Part of that was some of the kids we had in there hadn't played before. But you just can't come anywhere, wherever it is, you can't come anywhere half asleep. You've got to be ready to play and obviously we weren't ready to play."

Thankfully for Sikeston, they still had Kyland Gross on their side.

The senior quarterback, for the second straight week, had a career high in rushing yardage. And they needed every bit of it.

Gross finished with 236 yards rushing on 19 carries with three touchdowns and almost single-handedly brought the Bulldogs back.

"I just wanted to help my team out the best I can," Gross said. "Just give it everything I can, 110 percent and don't let my teammates down because they're expecting me to keep going. I'm going to help them when they're helping me."

Trailing 14-8 with the clock ticking down at the end of the third quarter, Gross sprung loose on a run up the middle before breaking down the sideline for a 64-yard touchdown to tie the game at 14-14.

After Sikeston's defense forced a Jennings punt, Gross scored on Sikeston's second play of the fourth quarter, this time on a 57-yard run to take the lead for good at 20-14 with 9:02 left in the game.

Gross sealed the victory with a 1-yard plunge with 1:54 left in the game to cap a clock-consuming, 11-play, 53-yard drive. Nathan Hampton's extra point extended the lead to 27-14.

Blake Flannigan added a 10-yard interception return for a touchdown with one minute left to reach the final margin.

But it was Gross, who had 149 yards rushing in the second half, that caught Jennings coach Mark Harris' eye.

And then, in reference to Washington Redskins rookie quarterback Robert Griffin III, Harris said with a laugh, "he's RGIV."

Gross' game put him well over 1,000 yards on the season, joining Sikeston's ever-growing list of 1,000-yard rushers. He is the seventh Bulldog to eclipse 1,000 yards in the last five years and it's the 17th time it has happened in school history.

With 1,208 yards on the season, Gross moved up to 10th on the single-season list.

"He kind of took over in that fourth quarter and we ran some things that maybe we hadn't ran and he did a good job," Gibbs said of Gross. "In the first half he really wasn't breaking many tackles because he was getting hit right in the mouth early, but in the second half we had a little bit bigger holes and he made big plays and that's what we expect him to do."

Gross' big day was good timing for the Bulldogs with running back Chris Word being held out due to an ankle injury.

"Maybe he could have gone, but I didn't want to risk it," Gibbs said of Word. "We thought we'd give him another couple days to rest and get him ready to go for the rest of the schedule."

Early on, it appeared the move to hold out Word would backfire. The Bulldogs fumbled on the third play of the game, setting up Jennings with excellent field position at the Sikeston 19.

On 3rd-and-8, Jennings quarterback Jordan Cook rolled to his left, tucked the ball, and out-raced the Bulldog defenders to the end zone for a 17-yard touchdown. Tyreese Brown then scored the two-point conversion run to give the Warriors an early 8-0 lead with 9:45 left in the first quarter.

The Bulldogs still could not get going on offense as turnovers and penalties stopped any momentum.

It wasn't until an errant pitch by Jennings that was kicked around on the ground and finally recovered by SIkeston at the Warrior 3-yard line that the Bulldogs were able to get on the board.

Sophomore Dustin Oakes, filling in for Word, scored on the next play to cut the Jennings lead to 8-6 with 5:56 left in the half.

Reese Porter then ran in the two-point conversion to tie things up which is where things stood until halftime.

Sikeston's defense had limited Jennings to 10 yards of offense and no first downs in the first half.

In the third quarter, Jennings broke the tie on its first possession as Ryan Lindsey squirted through for a 54-yard touchdown run with 8:44 left in the quarter to take a 14-8 lead.

It was the last time Sikeston's defense would buckle as they forced Jennings to punt three times, forced an interception and a turnover on downs on its final five possessions.

"Obviously it was a time to get nervous but at the same time the thing I do like is for three weeks in a row we've come back from deficits and been able to win the game," Gibbs said. "While it doesn't say much for how we start, it says a lot for how tough we are mentally in the fact that we just kept plugging, plugging, and plugging. And that's a positive."

The Bulldogs finished with 341 yards of offense with 195 coming in the second half. The Bulldogs turned the ball over four times.

Sikeston's defense, however, continued its stout play, limiting the Warriors to 144 yards of total offense and forcing three turnovers, converting one of those turnovers directly into points.

"We were up and the kids were excited, but we've got to play between the whistles," Harris said. "You can't hit a kid like the kids from Sikeston and then stop. You've got to keep driving them and keep pushing him. (Flannigan) and (Nick Nichols) are just monsters. That game came down to an experienced, very good Sikeston team and an inexperienced -- but we're getting better -- Jennings team."

Lindsey led the Warriors with 77 yards rushing on seven carries, but 54 of those yards came on one play as Jennings never could get any consistency going in the running game, which forced Harris to go with more of a passing look in the second half.

"I had to go to what we don't do well, which is the pistol and spread," Harris said. "We haven't really practiced it a whole lot. That's kind of our offense for the future. Offseason in the summer we'll get that pistol in so we'll have another option besides run, but that's what Jennings is known for. We get a stable of running backs every year -- these little fast, speedy cut-back guys. But we have to be able to throw."

Saturday's game marked the first-ever meeting between Sikeston and Jennings. The Bulldogs, despite the sloppy first half, left Harris impressed.

"We've seen them in jamborees and I told my kids that we're going to see teams like this. I said, 'guys, this is what Sikeston is. Big, good strong kids. Not exceptionally fast, I mean we play a lot of fast teams in the St. Louis area, but strength and technique, those guys are the tops.' I think they'd give anybody a run for their money up here," Harris said.

Jennings falls to 2-5 on the season and will host Ladue on Saturday.

Sikeston will close out its regular season schedule with a home game against Cardinal Ritter on Friday at 7 p.m. before starting district play the following week.