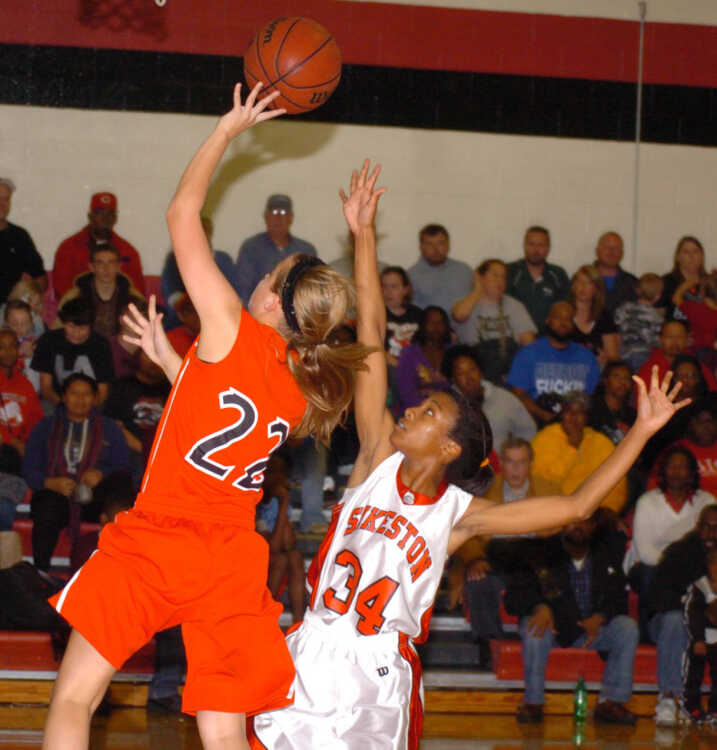 Sikeston eighth grader Alexis Boyd (34) tries to guard against a Dexter shooter on Thursday in a game the Lady Bulldogs went on to lose 35-22. Dexter won both seventh and eighth grade contests. (Photo by Brent Shipman, Staff)

SIKESTON -- Taking on the Dexter Lady Bearcats in their final home game of the season on Thursday, the Sikeston eighth grade basketball team fell 35-22 for only their second loss of the year.

"We had inconsistent play," Lady Bulldogs' head coach Keyth Blissett said. "We made minor mistakes on defense that led to major points for Dexter. We missed layups and didn't catch the ball, just small things that will kill you."

After falling behind 9-3 to end the first quarter, Sikeston was able to close to within two points early in the second frame.

Unfortunately for the Lady Bulldogs, a strong push by Dexter had them trailing 23-9 entering the half.

Though Sikeston edged out the Lady Bearcats 13-12 in second half, it wasn't enough to make up for the 14-point halftime deficit.

"I'm trying to get them to understand there's a difference between hurrying and being quick about your play," Blissett said. "There's just some things we have to learn, but I thought we fought and in a game like this you have to try and work those bugs out and get back on track."

Alexis Boyd and Larysa McClellon had six points each to lead Sikeston's effort while Madeline Witt finished with five points.

Dexter took an 8-3 lead after the first quarter before holding a four-point lead going into the break.

Outscoring Sikeston 10-2 in the third frame, the Lady Bearcats were able to hold off a fourth quarter comeback by the Lady Bulldogs.

Scoring all but two of her points in the first half, Gloria Bennett led Sikeston with nine points. Hailey Noon and Makiyla Jones had four and three points respectively while Morgan Merrill had two points.

On the year, Sikeston's eighth grade team falls to 10-2 and the seventh grade squad is 4-6.

The Lady Bulldogs will take on the Lady Indians Monday when they travel to Jackson.