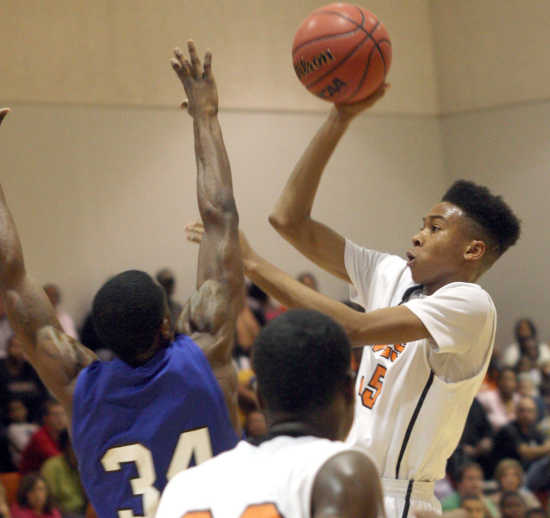 Suffocating the Braves on their home court, the Bluejays came away with an 84-67 win Friday night between the reigning Class 1 and Class 3 champions.

"We want to put some pressure on them and see how teams respond to that pressure," Charleston head coach Danny Farmer said. "If we can beat them with our defense, that's what we're going to do. Our defense took over."

Charleston's Darrion Carter led all scorers with 30 points and seven rebounds. Michael Hull added 15 points on 7 of 10 shooting while Sumner Foster scored 11. Both Ryan Parham and Trey Watkins each had eight assists on the night.

Charleston (12-2) had to bounce back from a 93-76 loss to Robert Hubbs and Dyer County, Tenn., during the Penny Hardaway Shootout in Newbern, Tenn. Thursday.

Less than 24 hours later, Charleston opened the first quarter by outscoring the Braves 27-19 shaking away any fatigue a long drive and a tough loss could have dealt.

"Knowing that we played a top-notch player (Hubbs) we had to come back and get back on track," Charleston senior Sumner Foster said. "Defensively, we shut down a lot of players and didn't give in a lot."

Farmer was a tad bit concerned about his team's long trip home Thursday night, but relied on his depth to get him through Friday.

"I knew I could play nine or so guys that would give me the same effort," Farmer said. "I figured we would make it through."

Carter got the Bluejays going early. The 6-3 senior scored 12 of his team-high 30 points in the first quarter taking advantage of Charleston's height advantage against the vertically-challenged Braves.

"Against most post men, Darrion can score," Farmer said. "We're going to get him the ball. At the same time, we've got to knock down shots. Shots at crucial times."

The Bluejays found themselves up by as many as 17 points with 1:45 left in the second quarter. The Braves were looking up at a 45-30 deficit at halftime.

"They make it tough. They don't let you get into your offense and we knew that coming in," Scott Central head coach Frank Staple said. "You can prepare for it all day, but they just do it so well. You just have to fight through it the best you can."

Charleston established a 20-point lead in the second half and kept it around that margin for most of the last two quarters. Carter scored another 10 points in the third quarter. Foster added eight at the same time keeping the Braves at a safe distance.

"We came back after halftime with that same pressure," Farmer said. "If you don't respond, just like that you'll be behind a lot."

The closest Scott Central came to Charleston was 14 points following a basket by Larandis Banks. Banks did not play against East Prairie Tuesday night due to issues with the team, but came back and poured in a team-high 28 for the Braves against Charleston.

"He's huge," Staple said abut Banks. "Everybody knows how great of a player he is and he hasn't even tapped into that potential yet. He's learning how to be a leader and I think he took a huge step towards that tonight."

Charleston made sure it stayed that way immediately going on a 11-2 run which helped lead to a 70-49 advantage going into the final quarter.

Reaching the 14-point deficit level again, the Braves were finally put away with just over two minutes remaining when Michael Hull, who finished with 15 points, hit the Braves with a 3-point dagger to put the Bluejays ahead 82-63.

"The biggest thing that I was the most proud about was that we kept fighting," Staple said. "We stayed together as a team. Anytime you play a team like Charleston it's an uphill battle. But, hey, you don't have to face Charleston in Class 1. It got us better."