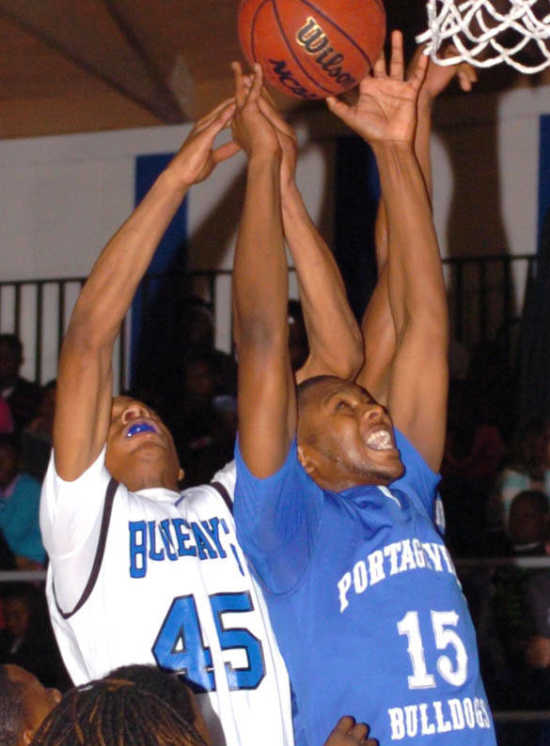 CHARLESTON -- With just one week before districts, the Charleston Bluejays are spending what little time they have left fine-tuning their game after the recent loss of leading scorer Michael Hull.

If Friday's results are any indication, the Bluejays are adjusting well as Charleston rode a stellar defensive effort to a 97-49 homecoming win over the Portageville Bulldogs.

"We've been having some grueling practices and we wanted to translate that to the floor," Charleston head coach Danny Farmer said. "I liked what I saw. We played hard defensively and wanted to make Portageville make decisions and that's what happened.

"Once again we turned our defense into offense and that's what we wanted."

Charleston dogged Portageville with their relentless press from the opening tip, collecting a total of 20 steals on the contest with the Bulldogs turnovers eventually piling up.

After hanging within a couple points of the Bluejays (20-3) midway through the first quarter, 10-8, Portageville (13-10) quickly started to fall behind in the final three minutes of the frame.

Senior Trey Watkins kicked off what became a game-high 23-point effort with a natural 3-pointer to open a 13-4 run that had Charleston out on top 23-12 entering the second quarter.

Charleston's best quarter of the night followed as the Bluejays outscored the Bulldogs 29-16 in the final eight minutes of the half to take a comfortable 52-28 lead into the break.

Watkins led the way with 12 points in the second quarter, scoring eight of those in the final 1:14 of the half on an 8-2 Bluejay run that was fueled by a pair of turnovers.

"We keyed in on rebounds and loose balls and pushed the tempo," Charleston senior Ryan Parham said. "We tried to wear them down in the first half and I think it worked well, so in the second half we laid back on them in the half court."

Portageville opened up the third quarter on a short-lived 4-2 run before the Bluejays started to close out the game with six-straight points to push their lead to 60-32.

Portageville called a timeout to regroup and matched Charleston shot-for-shot for the next several minutes. But three Bulldog turnovers in under two minutes had the Bluejays once again surging ahead.

An open layup from Parham gave Charleston it's first 30-point lead of the night with 3:23 left in the third quarter and was part of a 9-0 run that had the Bluejays ahead 73-39.

A quick basket from Robert Anderson broke an over two-minute scoring drought for the Bulldogs. But by the start of the fourth, Charleston held a 76-43 advantage.

Even with the turbo-clock rolling through the fourth quarter the Bluejays put up their fourth-straight 20-plus point frame, outscoring the Bulldogs 21-6 to close out the win.

"We just ran into a buzz saw," Portageville head coach Jason Irby said. "They're every bit as good as advertised and then some. I thought they played exceptionally well, obviously defensively. We just couldn't handle their pressure."

On his way to one of the best games of his career, Watkins shot 7 of 14 from the floor while going 8 of 11 (73 percent) from the charity stripe. On top of 23 points, he collected a team-high eight rebounds and three steals while dishing out four assists.

"He's capable of it," Farmer said of Watkin's big game. "He just holds back and he didn't have to (score) when we had Michael, but we've been talking and practicing. We realize that the other kids are going to have to start playing and we're going to have to become a different type of team."

Darrion Carter had 15 points on the night for Charleston, hitting on 7 of 10 shots, while also grabbing six boards.

Other Bluejays aiding the cause included Parham and Shandor Webster with 14 points each. Both Parham and Webster were a perfect 5 of 5 from inside the arc with Parham also contributing a team-high seven assists.

"The season is winding down and that's how we have to play in the postseason," Watkins said. "It's like a new season starts next Saturday so it felt good to come out and play how we should. We matched them athletically and our defense is what does it for us night in and night out."