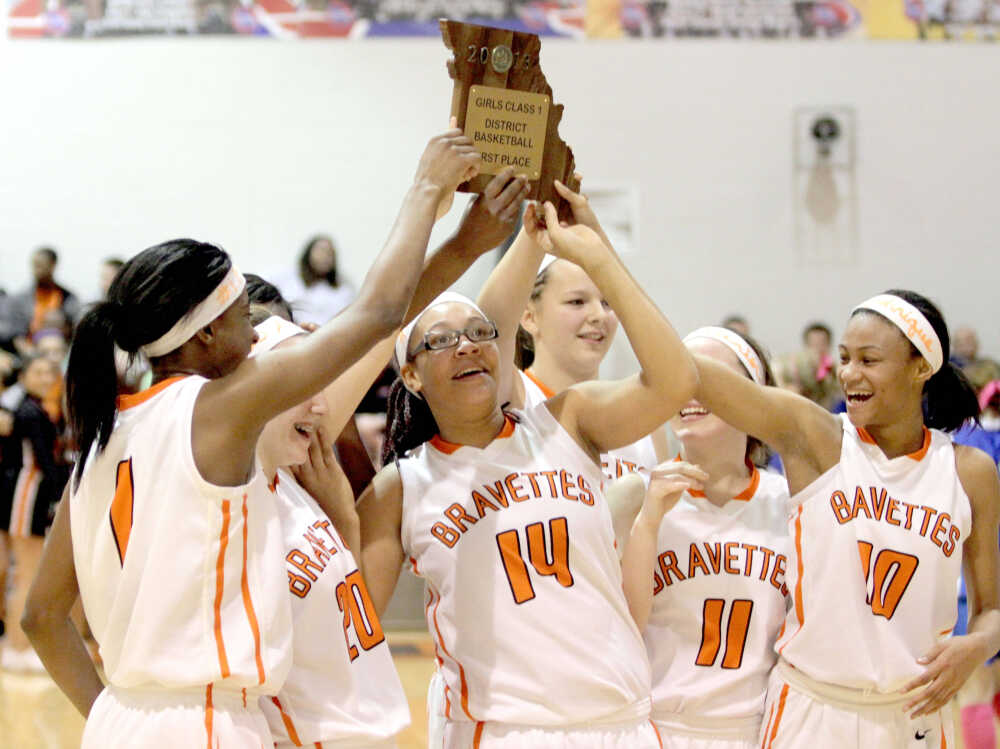 SIKESTON -- These Bravettes play with a bit of a chip on their shoulder.

They remember all too well the blowouts they were on the wrong end of as freshman and sophomores as well as watching their boys win state title after state title.

The Scott County Central Bravettes couldn't wait to get to this point. The point where their boys aren't the only Scott Central team hoisting trophies.

Following a 79-25 rout over Delta Friday, the Scott County Central Bravettes grabbed some hardware of their own winning their first district championship since the 2007-08 season.

"When I took over, I really saw that 'want' that this team had," first-year head coach Matt Limbaugh said. "They've saw the success of the boys program for so long and they really wanted it bad this year. That really gave me momentum too as a coach to want to do everything I can to make this team better."

This marks the Bravettes' 25th district title in their illustrious basketball history. Scott County Central has won seven girls state championships with their last coming in 1993. Much like the boys resurgence after a 15-year championship drought, the Bravettes are hoping to make some noise this season as a legitimate Class 1 title chaser. They too have had ups and downs within their program that included one-win seasons and not having enough players to field a team during the 2008-09 season.

"This motivates us to do better and get farther than where we are now," said junior Michala Blissett. "We want to get back on the map."

Blissett led the Bravettes with 26 points shooting 75 percent (12 of 16) from the floor. Ann Dennis scored 21 points hitting 3 of 5 3-pointers and Ditto added 19, which including 12 assists and seven steals.

The Bravettes jumped on an early lead knabbing a 7-0 advantage right from the start.

The Bravettes forced Delta into 11 turnovers in the first quarter, but led just 15-6 entering the second frame. Although highly favored to win the district crown, nerves from a team not used to big stages clearly showed.

"We were very impatient starting off," Limbaugh said. "I told them not to let the big game hype get to them and relax. We're not used to a very big crowd at our games."

Those jitters quickly exited in the second quarter.

With Ditto leading the way, Scott Central rattled off 16 unanswered points to start the second period. Ditto emerged as the floor general she's been all season, scoring 10 of those first 16. She also came up with four consecutive steals all leading to baskets.

"I was just in it," Ditto said about her second quarter display. "I didn't think about the crowd or anything. I didn't think of anything except that district title."

By the time Delta gathered themselves from Ditto's onslaught, the Bravettes found themselves ahead by a comfortable 31-6 advantage.

By halftime, Scott Central led 42-11 and were well on their way to a championship.

"Once we were able to get inside, Derien was able to cut through the lane and that opened her up for shots," Limbaugh said. "Ann hit some big shots for us when we needed it. That really helped us out -- staying patient and waiting for the cuts to happen."

Outscoring Delta 21-7 in the third quarter and 16-7 in the fourth, the Bravettes ended a five-year district championship hiatus as well as put a halt on Delta's stranglehold of 12-straight titles since 2001.

"It feel amazing," said Ditto. "That's the only word I can describe it with. Amazing."

This win helps the Bravettes erase the painful sting they suffered last season to the same Delta team during the district championship.

Scott County Central led Delta by 10 points in the second half last season only to have it ripped away by a push from the Lady Bobcats that left them with a 65-46 win.

"We knew last year we needed to make a change," said Blissett. "We wanted to get better over the summer and make a difference."

That difference led to a now 20-6 record and a spot in the sectional round of the Class 1 tournament. The Bravettes will face Naylor Tuesday at 7:30 p.m. at Bloomfield High School.

"As soon as you get a job at Scott Central you are preached to win," Limbaugh said. "We noticed that right away and got to work. It's a credit to the girls' hard work and dedication in the gym every day. These kinds of moments are the payoff."