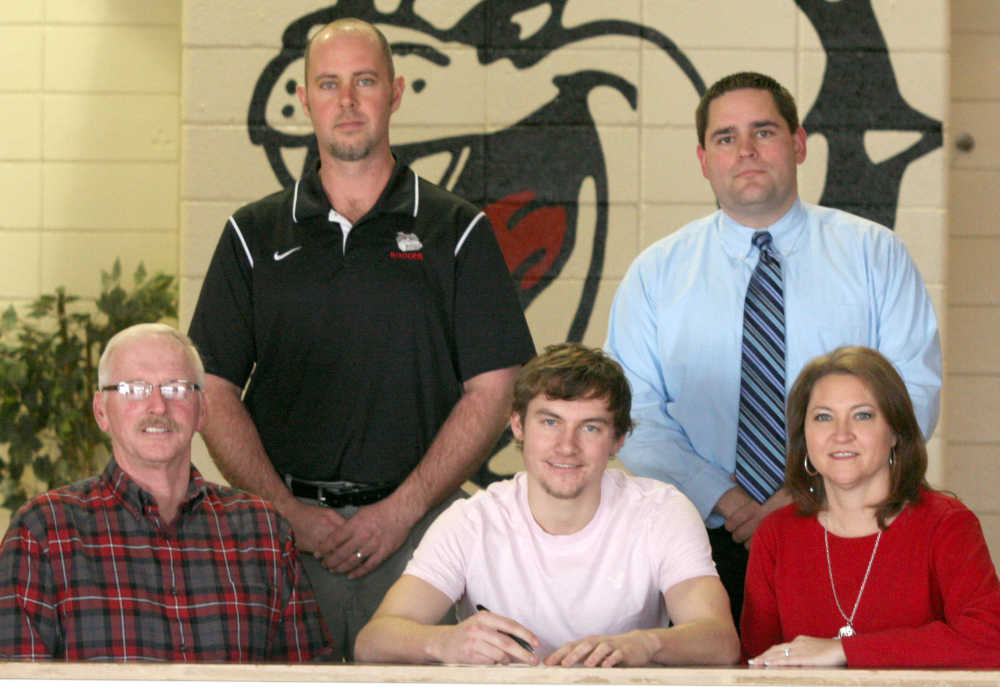 SIKESTON -- There are few who have made a bigger splash in one year than Sikeston's Josh Hampton.

Although he knew the trade, Hampton set records and made a name for himself in just one season in goal for the varsity Bulldogs which led to his move to the next level.

Hampton recently signed a letter of intent to play soccer for East Central College in Union as a goalkeeper after a record-setting year for the Sikeston Bulldogs.

"You don't really see that," Sikeston head coach Doyle Noe said about Hampton's prominent rise. "We've always known the ability was there to be a great goal keeper. In the back of his head, he knew he'd have his shot at being our goal keeper his senior year. He definitely took full advantage of it."

Hampton was chosen as the Class 2 Goal Keeper of the Year after setting the Sikeston school record for shutouts at 14. He also helped the Bulldogs to a school record 19 wins. He's the first Sikeston player to be named as one of the four Player of the Year honorees. He's also the first Bulldog goalie to be chosen as a first team all-state selection.

"It was a great year," Hampton said. "We started off winning a lot of games and a lot of shutouts. We wanted to move on, but we couldn't get past districts. All of us played real hard."

Hampton allowed just 25 goals on the year. If his first game, where he let seven goals slip by, was taken away, Hampton would have ended the year by allowing less than one goal per game (0.8) get by him.

"Josh was a big reason for our success. He was definitely a comfort to me knowing he was anchoring our defense, " Noe said. "I think Josh could have played at a lot of places and this will be a good opportunity for him. He'll definitely compete right off the bat for starting time."

After a promising 10-4-1 start by East Central was derailed by suspensions and various injuries, the Falcons ended the season with a final record of 10-8-1. Hampton will be joining an East Central program that has finished above .500 12 out of their last 13 seasons.

Hampton admitted he didn't know a lot about East Central beforehand. But after a visit, he knew this was a place he wanted to be a part of.

"We took a tour around campus and they had a lot of things that I liked," said Hampton. "Their field is real nice and I got to meet all their players. I just liked their school as a whole. I learned a lot about them in my tryout."

East Central, which is located in Union, is a Junior College that competes in the Midwest Community College Athletic Association (MCCAC). Former Sikeston graduate Blake Taylor played there in 2005.

The Falcons last won their conference championship in 2011 and five times in the last 13 years. In 2003, East Central took third place in the National Junior College Athletic Association's National Tournament.

Hampton will more than likely pursue a degree in criminal justice or welding.

"He approached me early on in his senior year and told me he wanted to play at the next level," Noe said. "I knew, talent-wise, that he definitely had the tools to play there.

"I'm very pleased that he's going to represent our schools. It's always nice to see guys that do well in high school go to the next level."