Making the jump: Borgsmiller continues transition to the next level 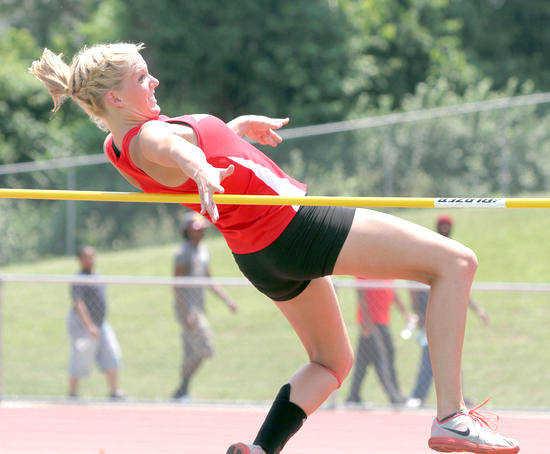 SPRINGFIELD -- Former Sikeston track and field star Betsy Borgsmiller has had an interesting year as she tries to navigate the waters from high school standout to college freshman competing at the Division I level.

With a little luck, however, the current Missouri State University student just completed the indoor portion of her freshman season with the Lady Bears with the best numbers of her career.

Competing in the Missouri Valley Conference Indoor Championship on Sunday, Feb. 24, Borgsmiller set a new personal best of 1.7 meters to place fifth in the high jump competition, her signature event.

"It was a huge surprise because, in my opinion, I was doing mediocre and not meeting the standards I set for myself up to that point," Borgsmiller said of her finish.

She credited an unplanned change in her approach during practice one day to turning her fortunes around before her biggest meet of the indoor season.

Borgsmiller added before the change her personal best jumps on the season had been in the 5-2 to 5-3 range.

While the fifth place finish was more than respectable for a freshman at one of the biggest stages, it unfortunately wasn't enough to help get Borgsmiller into the NCAA Indoor Championships.

With that in mind, Borgsmiller has been preparing for the outdoor portion of the Lady Bears schedule, which begins in just a few weeks, where she will once again specialize in the high jump.

She said she would also be a fill-in for the 200-meter dash as needed, where her season best is 28.56 seconds, set on Dec. 2 at the Arkansas State University Kickoff Klassic.

"We just started this week doing more all-over fitness again to build up endurance instead of just focusing on jumping," Borgsmiller said. "This week has been a little rough on the body, but it will all be worth it once we start going to outdoor meets."

Besides helping Missouri State to a fourth place finish in the MVC in her first semester, Borgsmiller recently was honored for a more personal accomplish as she was selected to the Athletic Department Honor Roll. An athlete must earn at least a 3.0 grade point average each semester to make the cut.

Now just midway through her freshman campaign, Borgsmiller admits the transition from high school to college competition hasn't been easy, but is getting easier as the year goes on.

"I didn't expect it to be easy or to still be getting first place at 5-4, 5-5 (like in high school)," she said of competing in her first year of college. "I had kind of already mentally prepared myself to not be the best.

"You'd have to be a different kind of species to go straight from high school to being one of the best ones in the college field. It's definitely humbling having to really work your tail off to get the results your wanting to get to get a good place. But it's all part of the package."