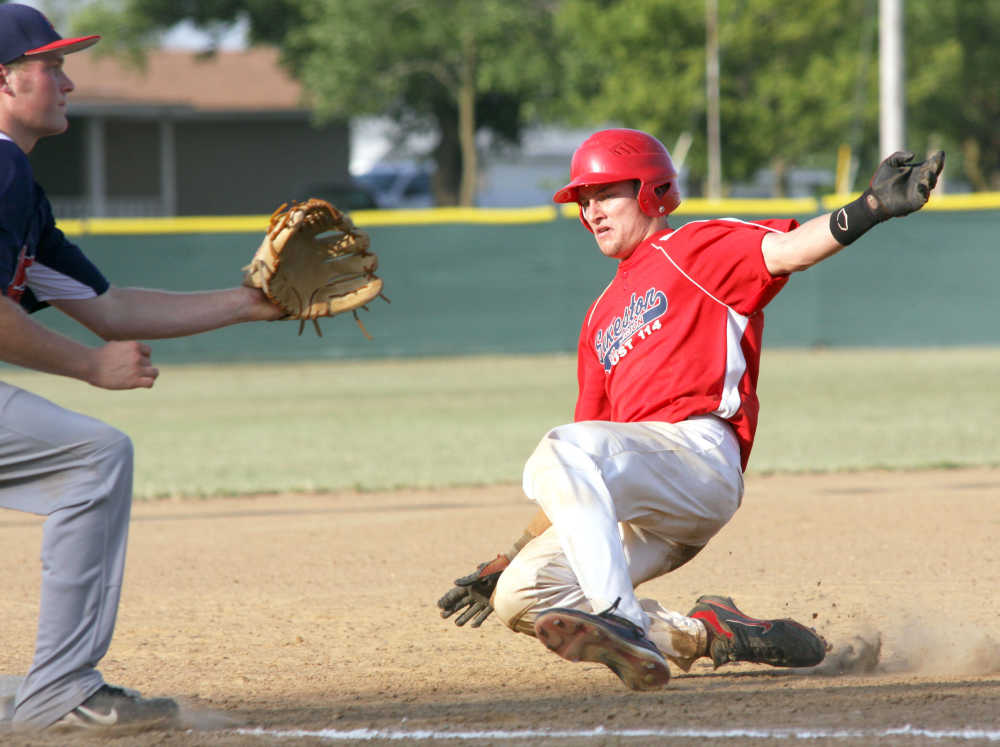 SIKESTON -- Continuing a week of non-stop baseball Sikeston American Legion Post 114 held off a comeback attempt from Jackson Senior Babe Ruth on Wednesday for a 19-9 win in six innings via the mercy rule.

"It started out rough, but we came around and started to play a little ball," Sikeston head coach Pete Kennard said. "After the third inning we kicked it around a little bit, but we have guys out of position just trying to get through the night."

After a seven-run rally in the second inning Post 114 (5-4) looked like they might run away from Jackson early as they took an 8-3 lead into the third frame.

By the bottom of the fourth, however, Jackson (2-6) had closed back to within a run, 10-9, thanks to separate four and three runs rallies in their previous two trips to the plate.

Sikeston responded with 10 unanswered runs to close out the game, starting with a five run rally in the fourth. Following an initial strikeout that started the inning Jarett Sandlin was hit by a pitch to kick off five straight batters who reached base before coming around to score.

Austin Godwin drove in the first run of the rally with a double before Luis Matos plated a pair of runners on a ball the pitcher mishandled. A Patrick Smith RBI double kept the rally going before Lane Chamberlain brought in the final run with a sacrifice fly to make it 15-9.

"We came out and got that seven (in the second inning), then turned around and gave them three or four the next inning," Kennard said. "That kind of upset me.

"It's kind of taking your foot off the gas, but we came back and put out of hand a little bit."

With their pitching holding Jackson off the board in both the fifth and sixth innings Sikeston continued to creep closer to the 10-run mercy rule with another run, scored by Sandlin, in the fifth.

Just three runs shy of ending the game early Post 114 opened the bottom of the sixth with a walk from Smith, who came home to score on a double by Chamberlain. A passed ball later in the frame allowed Chamberlain to come home, leaving Sikeston just one run shy of the mercy rule, 18-9.

Still with only one out Post 114 got back-to-back walks, which were followed by a passed ball to put runners on first and third with Sandlin at the plate. Sandlin laid down a sacrifice bunt back to the pitcher's mound that gave JaShawn McDaniel plenty of time to cross the plate, securing Post 114's fifth win of the season.

"The biggest key right there for us is Logan Frazier comes in and throws two shutout innings (late in the game)," Kennard said. "Austin (Kennard) gets out of a bases loaded jam and I think that really changed the momentum and just kind of shut them down.

"I think they ran out of gas there at the end."

Leading a 10-hit effort Sikeston leadoff hitter, Smith, went 3 for 3 with three doubles and reached in all five plate appearances. Chamberlain had two hits, including a double while Austin Godwin contributed a double and reach in all four trips to the plate.

For Jackson, who had four hits, Taylor Holmes and Marc Rivas had a double each with Tyler Dowdy and Luke LeGrand contributing singles to the cause.

Sikeston will look to keep their momentum going Thursday when they kick off pool play in the Bleacher Bum Invitational.

Competing in Pool B, Post 114 will play Kennett today at 5 p.m. before taking on Marble Hill Friday at 10 a.m. Both games will take place at Hillhouse Park in Charleston.