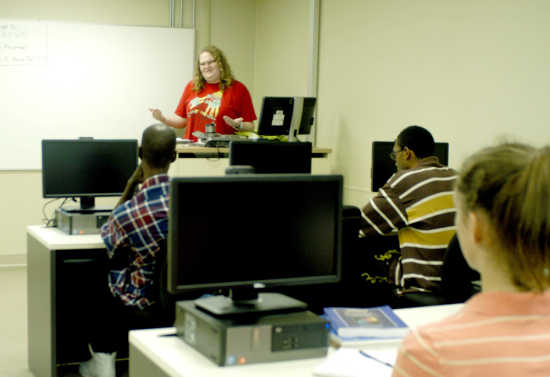 Alexis Long talks to students in her English class Monday at Three Rivers College in Sikeston. Monday marked the first day of the fall semester for the all TRC sites. (Leonna Heuring, Staff)

SIKESTON -- It was back to class on Monday for students at Three Rivers College in Sikeston, where record enrollment continues into the new fall semester.

"Our enrollment is high and not only with the number of students but the number of classes students are taking," said Missy Marshall, director of TRC's Sikeston campus.

Preliminary numbers show over 500 students are taking 4,700 credit hours at the Sikeston facility, Marshall said. The number of full-time students is also increasing, she said, adding a student is considered full-time when they take 12 or more credit hours a semester.

TRC has experienced so much growth recently, it's opened an outreach center in Scott City, which also had its first classes of the semester on Monday, Marshall said.

While she has noticed an increase in the number of newly graduated high schoolers enrolled at TRC, the college has students of all ages.

"It creates good life experiences for all who are involved," Marshall said of the variety of students. "... They have different perceptions and experiences, and it's a great way to learn."

In the meantime, Marshall said she and the staff and students at TRC-Sikeston are embracing the growth.

"We're making it work until we're in our new building," Marshall said about TRC's growth.

A groundbreaking ceremony was held Thursday for TRC's Eastern Campus at Highways 60 and 61 in Sikeston, which will include a 36,000 square-foot inaugural building. It will include classrooms, a computer lab, science labs, LPN to RN program facilities, a library and an exhibit hall/auditorium.

Nursing students Crystal Smith of Leopold and Katelyn Williams of Delta said they were excited about the nursing program facilities planned at the new site.

Lana Adkisson of Sikeston, who is pursuing an associate of arts degree in religion studies, said she's also excited about TRC's new facility in Sikeston

"It needs to be bigger," Adkisson said of the current Sikeston site.

On Monday, though, the TRC students were just trying to get through their first day of classes for the fall semester.

Williams, 19, was waiting in the student lounge before her first class at Three Rivers began. She admitted she was a little bit nervous about starting school to pursue an associate's degree in nursing.

"I'm nervous about meeting everybody and trying to learn the classrooms," said Williams, who was also entering her first semester at TRC.

For the complete story and more, see Tuesday's Standard Democrat or log in to the electronic edition.