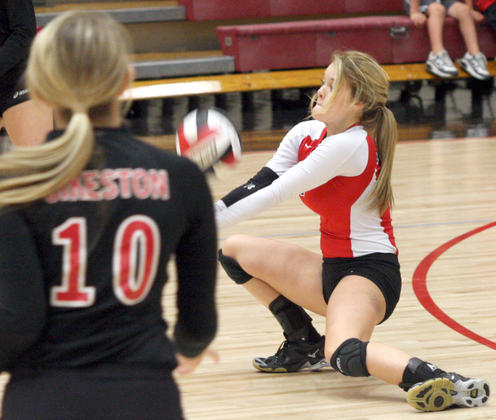 SIKESTON -- It's been a season of change for the Sikeston Lady Bulldogs volleyball team so far and they're still trying to find the right pieces.

The Lady Bulldogs continued that search Thursday night as they fell to the visiting Poplar Bluff Lady Mules in two sets, 25-12 and 25-11. 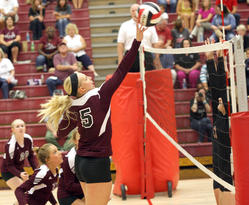 Sikeston remains winless on the year with an 0-8-1 record.

The Lady Bulldogs have worked through roster and position changes throughout most of the season as they look for the lineup that fits them best. They began Thursday with another transition by moving, arguably, their best setter, Lauren Beydler, to libero to help solidify their passing and overall defense.

"Tonight we pulled some young girls up to play and added two jayvee players up to the varsity roster because I'm trying to solidify our defense," coach Beydler said. "I saw a lot of good things by moving Lauren to libero and having her as a primary passer and digger."

With Beydler now as Sikeston's libero, coach Beydler was forced to move freshman Torrie Helms into the setter's role. She's one of three freshman and five junior varsity players that saw playing time against Poplar Bluff, who currently sit with an 8-1-1 record.

"This was a tough match to put (Helms) in as a setter against a tough team like Poplar Bluff coach Beydler said. "After seeing the positives outside of the final score, I think we had some pretty decent rallies."

Although the defensive changes eventually took hold, another problem area for the Lady Bulldogs this season reared it's head.

"We could not terminate the ball," coach Beydler said. "That's been an issue this year and we're still trying to find someone whose willing to terminate. Esther (Chinwuko) can do it if we can get the ball in front of her. We're not doing that enough. Kalli was very aggressive and probably played one of her most aggressive games of the year tonight. She saw some things out there that hopefully we can build on with this new lineup with a few tweaks here and there."

It took time for the transition to sink in as Sikeston began the match in a deep hole. Poplar Bluff's Kori Tapp served 12-straight times to give the Lady Mules a 12-0 cushion before Sikeston scored their first point.

"Our serving is something we've really been working on all season," Poplar Bluff head coach Amanda Lance said. "The first game, we served a lot of points in a row. You get a good server on the back line and that definitely helps."

Miranda Dunlap and Kaylie Tackett were two big reasons Poplar Bluff grabbed the early advantage as the two hitters attacked the middle of the court. Dunlap finished with a team-high 6 kills while Tackett added 5.

"We've come a long way since summer," Lance said. "The girls have done an awesome job for me and they're willing and open to learning. They keep getting better."

After the first set landed in Poplar Bluff's favor, the second remained close early on with Sikeston hanging tough behind an 8-6 Poplar Bluff lead. But a spurt by the Lady Mules quickly dashed the back-and-forth leading to a 14-7 advantage and a timeout by Sikeston.

"I don't like to look at the score rather than the good stuff I saw against a really good team," coach Beydler said.