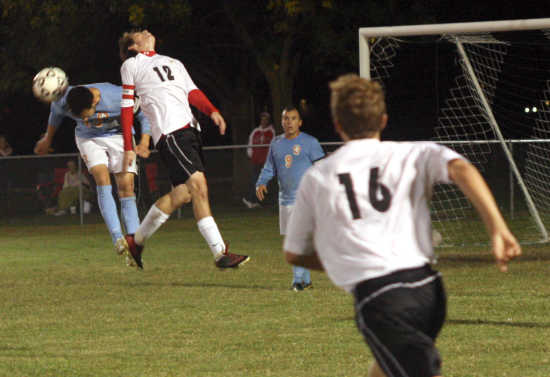 SIKESTON -- Sikeston senior Steven Baker simply wanted his team to kick the ball whenever they could.

Leading by one goal late in a match always seems to bring on a sort of controlled chaos which is what Baker wanted his teammates to command. 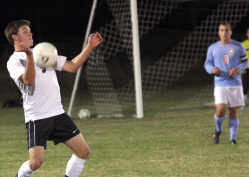 "You can't really guess what's going on because everybody is just kicking the ball everywhere," Baker said about the late stages of the game. "We want to keep the ball moving and keep (the other team) guessing on where we're going."

Visiting Cape Central desperately tried punching in the tying goal as minutes turned into seconds but Sikeston's stingy defense held strong for their sixth shutout of the season as they took down the Tigers 1-0 Thursday at the Sikeston Sports Complex.

It's Sikeston's newly appointed head coach Gabe Dement's first win after taking over for Doyle Noe, who was let go earlier this week for unspecified reasons.

"(Cape Central) definitely had us on our heels at the end of the game," said Dement. "You have to give them credit. They came to play tonight."

The win gives Sikeston the edge against Cape Central in the season series. The Bulldogs (13-8-1) have took the last two matches against their rival after losing to Cape Central in two overtimes during their first meeting of the season.

"Cape's become a pretty big rival with us," Dement said. "We always have close games with them. It means a lot for district seeding which this win should put us in a decent position, seed-wise."

Along with Baker, Sikeston defenders Jared Boyd, Kaleb Newton, Hunter Taylor and goalie Caleb Hampton kept the Tigers at bay but were faced with a few scares for the majority of the second half.

Twice during the 55th minute Cape Central nearly scored directly in front of Sikeston's net but saves by Hampton kept Sikeston's lead intact. The Tigers continued to push up and converge on the goal with a fury as less than 15 minutes remained.

Each time, however, Sikeston was able to clear the ball.

"I saw a lot of hard work," Baker said about his team's victory. "We've been practicing and we still try to outwork the other team like always - like we have the past three years. It's finally starting to pay off in the end."

Conner Merideth scored Sikeston's lone goal in the 12th minute of the first half.

Baker played a ball from midfield inside the box and, after bouncing around a few times, Merideth found the ball at his feet. From nearly 30 yards away, the sophomore hit the side netting to give Sikeston their, eventual, game-winner.

"It landed on Conner's foot and he knew what to do with it," said Dement. "It was a pretty goal.

"That was huge for momentum for our boys. We haven't been able to get an early goal recently. For him to put that ball in the net, it picked our spirits up."

Other than the final 15 minutes when Cape Central frantically tried scoring, Sikeston controlled possession for most of the game.

"We were calm on the ball, trying to possess it," said Dement. "If you have the ball, the other team can't score. That's kind of the point. Hopefully, we can get chances (to score) off of those possessions and we did at times."

Sikeston broke a two-game losing streak after falling to Farmington and Carbondale earlier this week. It was a celebrated win for Sikeston's seven seniors, who were honored before the game as part of senior night.

"It feels real good, especially after coming off of a few losses," Baker said.

Sikeston will have 10 days off before hosting Poplar Bluff for their next game. They'll end the regular season on Oct. 30 at Saxony Lutheran.