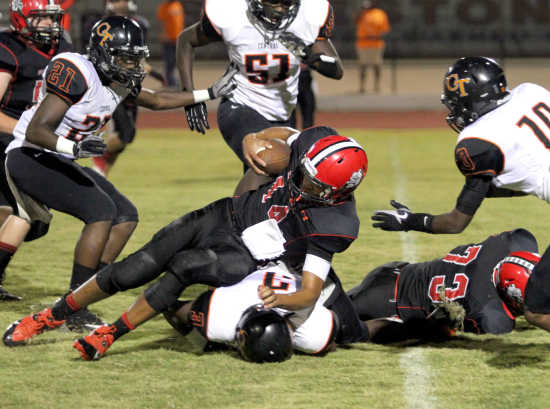 SIKESTON -- With two games left on the regular season schedule and conference play finished, the Sikeston Bulldogs' focus has shifted to closing out strong and attempting to get the highest seed possible in district play.

The Bulldogs, currently seeded third in the eight-team district, can take a big step towards home field advantage for at least the first two rounds of district play if they can defeat Jennings tonight at Sikeston Public Schools Stadium.

Kickoff is set for 7 p.m. with homecoming festivities scheduled at halftime.

It's unfamiliar territory for the Bulldog players, who have seen the team compile a record of 30-6 in the current seniors' three years in the program coming into the season.

But Sikeston coach Kent Gibbs said they have responded better than expected this week in practice.

"I've been really, really surprised from Sunday to today, the kids have come in with a good, clean attitude," Gibbs said. "It was a new experience losing two games in a row, but I've been really pleased with what we've done in practice and how we've gone about our business. Really pleased."

Against Jackson, the Bulldogs were simply out-matched by the powerful Indians team.

However, last week against Cape Central, Sikeston put together one of its strongest halves of football the entire season as they took a 17-6 lead into halftime.

The Bulldogs couldn't hold on, though, as the talented and athletic Tigers reeled off 23 straight points in the second half to pull out the win.

"We've just got to finish," Gibbs said. "We played one good half last week. I think we played about as good as we can play. We didn't play so well the second half, and hats off to Cape, part of that was them. Basically we've got to finish what we start, and hopefully we start well."

The Bulldogs will try to do that against a Jennings team that comes into tonight's game with a record of 3-4. The St. Louis school gave Sikeston its biggest scare of the season last year up to that point.

The Bulldogs, which were 7-0 coming into the contest, found themselves trailing the Warriors 14-8 late in the third quarter before being saved by the dynamic talents of quarterback Kyland Gross, who had a career day with 236 rushing yards and three touchdowns to lead the team to a 33-14 victory and keep the undefeated streak alive for another week.

That Jennings team boasted plenty of athletes, most of whom return for this season, most notably 6-foot-1, 180-pound junior quarterback Jordan Cook, who scored the Warriors' first touchdown against the Bulldogs last year.

Cook is the catalyst, leading the team with 451 yards rushing and six touchdowns. He's thrown for 464 yards with two scores and two interceptions, completing 38 of 77 (49 percent) of his passes.

Senior Uriah Miles has 283 yards with three touchdowns and junior Ed Nixon has 128 yards on the season.

"The big thing is they've got at least three kids that run really, really fast," Gibbs said of Jennings. "We're going to have to do a good job at the line of scrimmage both offensively and defensively, attacking them with the defensive front and getting them before they get loose on us."

Cook spreads the ball around to nine different receivers with Marcus McGee, a 6-foot, 195 pound junior tight end leading the pack with seven receptions for 237 yards, averaging a whopping 33.9 yards per catch.

David Florian, a 5-11 senior leads the team with 11 receptions.

Gibbs says they still use the offense, but it's just a small part of the entire package.

"They run a lot of different sets on offense, just an unbelievable amount of sets," Gibbs said. "They will run that double-wing. They run a lot of shotgun stuff with spread formations and a lot of different kind of trips formations. A lot of motion, misdirection. They try to hit the option and the big play pass. They've expanded what they do quite a bit and that could give us problems with alignments and those kind of things. We can't let them have those big, cheap easy plays. When you watch them on film, once they get rolling they do a really good job. We've got to keep them down and not let them get rolling."

The Bulldogs have had their struggles on the offensive side of the ball, particularly in the passing game, for most of the season.

But for the first time the passing game showed signs of life last week against Cape Central.

Quarterbacks Reese Porter and Nathan Hampton combined to complete 14 of 17 passes for 109 yards.

Sikeston's ground game has been solid, but Gibbs said the team will need to continue to improve in the passing game for the team to be successful.

"It's really been about a three-fold problem," Gibbs said. "There's times we don't throw it as well as we need to throw. There's times we've had open receivers and we've dropped the ball. There's times we're not getting the pass protection to be able to get a pass off. There's not any secrets with us. We've got to be good at running the football, but we've also got to get better at throwing the football. Hopefully we've gotten better with that."

Porter and senior running back Chris Word are tied for the team lead in rushing with 580 yards apiece.

Sikeston will once again be without starting offensive linemen Tanner Henson (knee) and Luke Williams (concussion). The Bulldogs already had one offensive lineman knocked out for the season before the first practice in Louis Galang (shoulder surgery).

It has continued a season long trend that has truly tested Sikeston's depth.

Sikeston's defense, which was simply stellar through the first five games this season, has hit some struggles the past two weeks against the two strongest opponents on the schedule thus far, but a part of that is also attributed to the offense's failures to keep the chains moving.

"We're going to have to get off the ball and move our feet, take it to them and try to maintain possession of the football," Gibbs said. "When we get opportunities we need to score in the red zone. The kids are really wanting to get better and work. The thing that we've told them is, 'look, we need to focus on us. We need to focus on "we" not "me." Making ourselves as good as we can possibly be.'