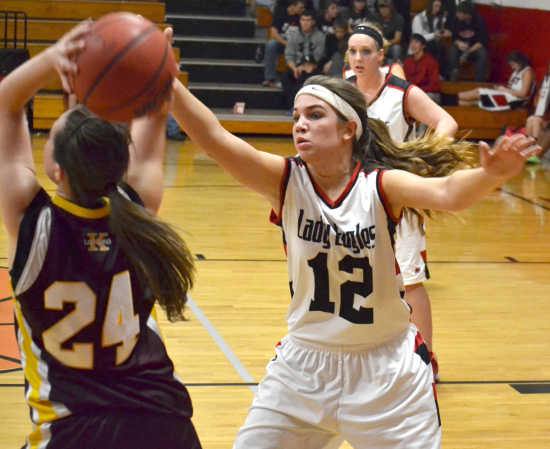 After suffering a 17-points loss to East Prairie on Saturday in the Lady Devil Invitational Tournament, the Lady Hawks hung tight entering the fourth quarter on Monday before ultimately falling 47-37. 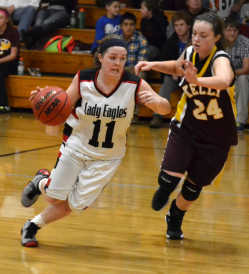 "We played a million times better tonight," Kelly head coach Rod McQuerter said. "This is early in the season and our girls our still working on scoring. Our defense is there. The girls played hard, played excellent defense, but like I keep telling them when you shoot 3 for 13 from the free throw line you're digging a hole. It's hard to dig out of that hole against good teams."

East Prairie looked on their way to another rout in the second quarter when an 8-0 run put them ahead 16-6 two minutes into the frame.

Saving the Lady Hawks was a brilliant run by junior Tessa Johnson, who scored all 10 of Kelly's points in the period to close her team to within six, at 22-16, entering halftime.

After narrowing the gap to one point behind the Lady Eagles, 28-27, late in the third quarter, a free throw from Kali Thurman, followed by a bucket by Rebekah Douglas gave East Prairie a four-point edge entering the final period.

That's where Kelly's struggles at the free throw this season came back to haunt them. Being sent to the line often in the fourth quarter, the Lady Hawks converted on only 3 of 13 shots from the charity stripe.

A Kaitlyn Shands 3-pointer and back-to-back baskets from Ashley Bard fueled an 8-2 run in the first three minutes of the fourth.

After Kelly missed 4 of 5 free throws over the next three minutes, it allowed the Lady Eagles to make a 7-1 run. With a 13-point lead heading into the final two minutes East Prairie was able to kill enough time off the clock before Kelly could mount a comeback.

"(Johnson) scored all those by herself in the second quarter so in the third we came out and did a little bit of diamond-and-one," East Prairie head coach Steven Douglas said. "That took them a little bit out of their rhythm, then a couple of their other girls made shots so we had to come back out of it again. I think that kind of disrupted their rhythm a little bit then we got back to playing a little better. They had two people on Caitlyn Harwell. Every time you'd look there was two. We did a really nice job in that fourth quarter getting the girls who were unguarded the ball."

Leading the Lady Eagles as they improved to 3-2 on the season, was a game-high 15 points from Shands, who had two of her team's four 3-pointers. Harwell added nine points while Rebekah Douglas finished with seven points.

For Kelly, who stands at 2-3 on the year, Johnson finished with 14 points while hitting three 3-pointers. LeDure was second on the squad with 12 points, including six in the fourth quarter alone.

"Kelly came out with a lot more ferocity tonight than they did on Saturday," Douglas said. "Tessa had a much better game tonight. She really kept them in the ball game. She's such a nice player that can play inside and outside. She had some good shots there in the second quarter. We just lost her and you can't lose her."

On the junior varsity side it was Kelly coming away with a 39-15 win.